Do you have things that stick in your mind?  Emotions that are intertwined so closely you cannot separate them? Like the day that President Kennedy was shot or for the younger generation 9-11.  Days in history that you recall..exactly where you were and what you were doing?

Far Guy was on temporary duty in Florida, at Tyndall AFB. We lived in Moorhead, Minnesota back then.  Both of the girls were in school..it was a weekday..maybe a Tuesday?  I was in a hospital room in Fargo, North Dakota.

My Dad was in the recovery phase.  He had been diagnosed with bladder cancer, he had a biopsy earlier, and then radiation treatments before the big surgery.  We did not know what the prognosis was going to be, the Doctor felt that he had done all that he could…for the best result.   The surgery was very painful, my Dad doesn’t remember much of what happened, but the rest of us do. One time during that long day of his surgery, my Mother broke down and began to cry.  I told her then the same thing I would tell her now.  I said “Mom, God loves Dad more than both of us put together and he will do what is best for Dad.”  I am not sure that I would have made the same decision that my Dad did..as the outlook was bleak..he could have the surgery and have a very small chance to live or do nothing and be consumed by cancer in six months.

I was sitting there in that hospital room, watching TV when the Space Shuttle named Challenger with the luckiest teacher in American lifted off. It was at the moment when the space craft exploded that I realized that we are never guaranteed anything in this life.  We can be here one minute and gone the next.  I was shocked and deeply saddened for the school children of America, and all the friends and relatives that were on the bleachers that very happy day that turned so sad in just  moments after lift off. Their loved ones didn’t have a chance for survival.

My Dad had a chance, he survived the removal of his bladder.  Is life different for him? ..yes it is.  Sometimes he gets discouraged..but he keeps on keeping on. He leads a very active lifestyle.

The young Doctor that did my Dad’s surgery was only in Fargo for a short time.  My Mother is convinced that he was sent to Fargo specifically to do my Dad’s surgery, after all these years I still remember his name.  Dr. Ural.  He was a urologist…and perhaps part Angel too. 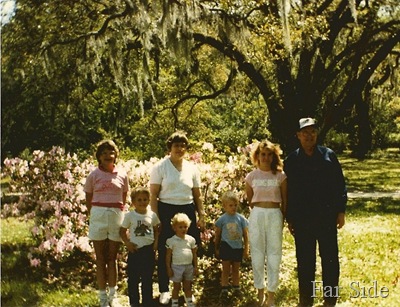 Spring of 1986, Jennifer, Kirk, Mom, Ellen, Ben, Trica and Dad. This photo was taken in Louisiana, we went down to visit my  baby brother and his family.  Of course all these children are 25 years older now…and so is my Dad:)

They say there are no coincidences. :)

I'd go for the small chance of survival, too. I went for it against doctor's advice when Dagan was a baby and not supposed to live--and several times after that, too. Dagan's all patched up and kick started and just turned 36 years old in November. :)

Life can change in a second. We are all on borrowed time. Congrats to your dad. :):)

I was in my living room when my sister in law called and said the space shuttle has blown up. I turned on our new satellite dish system and watched it on CNN news. Horrible. I can remember 3 things clearly, the day Kennedy was shot (we were in 7th grade remember Far Side?), the Challenger, and 9-11. All earth shattering - and yes, no guarantees for a tomorrow in this life.

I tend to agree with your mom; seems like that God placed that Dr. to help your dad.
I vividly remember the Challenger disaster too. I think with the teacher being aboard, it somehow made it seem more on "our" level. None of us know how long we have. We just have to live each day to its fullest and trust God's leading.

I thought at first you were going to say you remembered the day because it was when nothing else could be done for your dad so I was glad to hear the rest of that story turning out well.
That Challenger explosion day is burned in many of our memories. I was babysitting - - a Mon - Fri daycare deal in my home so I could be with my children while they were small. Do you think it made more of an impact on us because of the teacher? June Scobee Rogers, wife of the commander of the Challenger, lives in this area - - - I think she does anyway. She has spoken to at least one of the graduations here at Lee University.

Wow, what a wonderful story about your brave Daddy! I'm so thrilled he made the right decision. It's just one of those cases that in His guidance...God knows what's best.

God bless you and have an awesome weekend, go hug your daddy for me...'K'???

I was at work and when I heard about the Challenger going down, I was so horrified at the loss of life. One of them was from the University of Colorado at Boulder, which is where I was at the time. The TV coverage was nonstop, and I know it was a really tough time for many of us.

Hmm that is one nice story! Twenty five years ago is hard for me to remember. I was living with the hubby in the country in a trailer and just barely making ends meet. I don't really know much beyond that. Which I quess isn't too bad. Love the picture!

After Rep. Giffords was shot, I heard a story on NPR where they were talking about inspirational speeches given by presidents in times of crisis. After the Challenger fell from the sky, Pres. Reagan said, "They slipped the surly bonds of earth and touches the face of God." Which is so beautiful it should be a poem.

Glad things went well with your dad and that he's still with you!

BTW--one of your long-time lurkers finally launched her own blog: http://paulinepersing.blogspot.com/

Check it out if you get time.

What a wonderful story...that your dad did well.

Yes, I remember exactly what I was doing that day, the day Kennedy was shot and the day they walked on the moon.

Far Side, I love your story! I agree about the Dr. & your Dad being in the right place, right time... Angels are around, we just have to be perceptive enough to realize...

I also heard Pres. Reagan's words after the Challenger disaster, and he borrowed part of his speech from "High Flight" by John Gillespie Magee (Sept 1941).

Oh! I have slipped the surly bonds of Earth
And danced the skies on laughter-silvered wings;
Sunward I've climbed, and joined the tumbling mirth
Of sun-split clouds, — and done a hundred things
You have not dreamed of — wheeled and soared and swung
High in the sunlit silence. Hov'ring there,
I've chased the shouting wind along, and flung
My eager craft through footless halls of air. . . .

Up, up the long, delirious burning blue
I've topped the wind-swept heights with easy grace
Where never lark, or ever eagle flew —
And, while with silent, lifting mind I've trod
The high untrespassed sanctity of space,
Put out my hand, and touched the face of God.

I remember, too. My son was 5 years old and wondered why he couldn't watch cartoons that day.

In the midst of all that sadness, your dad's story was a glimmer of hope.

All the other worlds tradgidy's like princes Di's death and others I remember but the ones I remember most always and forever will be when my father was suffering with throat cancer and was ata home and not the hospital were he wanted to be when he passed and the day my mum suddenly passed at home those will never forget !

It is interesting what each individual chooses. My dad chose to do anything and everything and he lived four extra years more than the docs even thought he would. My mom, thirteen years later, chose to do absolutely nothing, and was gone in six months like she predicted.

But none of us know our own days, how many of them we will have and what events they will be filled with, the only thing that is certain is that they are filled with love when we embrace the Author of it all.

I love this story about your dad! I agree that the doctor was sent by God to your family!