Yesterday I wrote about “The Echo Ring”  where supposedly you can stand in the center and whisper and it can be heard all around the ring..should you have people standing there to hear your whisper.   WELL..as it turns out the photo I showed you is a old stone bandstand.  The real echo ring which I assumed was a campfire ring because it had the remnants of a campfire in the center..is up the stone steps and on the south edge of the park.  Of course it is all covered with snow right now, but when spring comes I will go and take a photo of the real echo ring.  So all of you that said it looked like a bandstand were entirely correct and I was entirely wrong.  This is proof positive that I am not perfect, and that things are not always as they seem.  Perhaps I should spend some time in the penalty box.

Last evening even though it was –18 F or –28 C  we attended a Girls 12 and Under Hockey Game in Detroit Lakes.  Maddie and Paige were both playing.  Maddie had some skate issues..blisters and calluses..my feet hurt for her.  Paige was being Paige and wore two different socks… 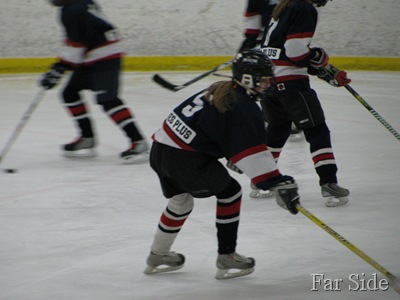 she must have lost a sock someplace..but it was easier to keep track of her on the ice. 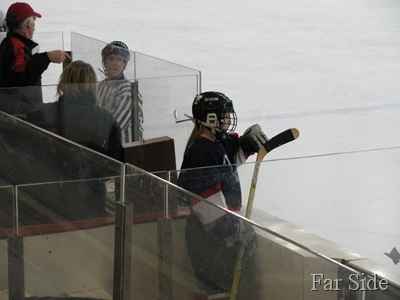 Here is Miss Paige in the penalty box..she didn’t feel that she was hooking..but the ref said she did..so she spent her time in the penalty box.  These little girls had two hockey games yesterday..in this Grandma’s opinion one Hockey game a day is plenty.  They lost again..3 to 1..I wish they would win just one game this season. 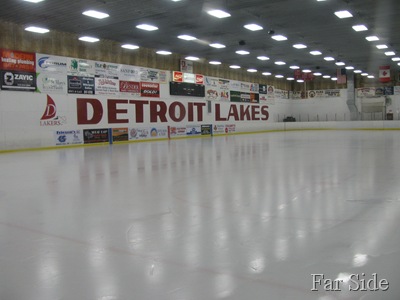 Hockey..and the penalty box..the sport where if you break the rules..your teammates must carry on without you.  The sport where you go in from the cold to sit in the cold:)

I'm going to my first hockey game this year.

Oh yes, the old power play for the opposite team while you sit in the penalty box. No fun at all. Year later it won't matter for the girls that they won or lost - it will the memories that count. They are having a good time and will have lots of those memories to talk about in the future - and I imagine many of them will include Grandma Far Side cheering on the sidelines.

I used to play hockey when I was a kid from pre teen to 18 I remeber those days ! I had to stop playing because I totaled my knee when I hit the boards , back in my day it was a lot ruffer then it is now, I think the rules now are better saves kids from permanent injury's and opperations I had to have and the knee will never be the same still acts up on me now after 26 years ! Great post and we all make mistakes about info lol the post was still interesting about the Echo Ring ! Have a great day !

I've never had the pleasure of attendin' a hockey game but I so imagine after all the other games I've attended of the grandkiddos...one a day is enough.

God bless and have an exceptional day Miss Connie. :o)

Very up front of you to tell us about the bandstand/echo ring snafu. That's pretty funny. I feel for Maddie having blisters, no fun! And Paige must have another pair that matches this pair exactly. :-)

If there are any games left, I wish them the best of luck!

Hockey! I get to watch it just about every night. Maybe she should just adopt that one sock look;)

LOL - I hear you about going into the cold from the cold... in our case, it's called ice skating!

Glad you went to their game. They must love playing that game - just too cold for me! Way to go girls!

I wish I could ice skate! She looks so confident on the ice! I ummm.. hope this is the only "hooking" she ever does - unless it's making a rug. :)

I'm glad the mystery of the bandstand is cleared up - that's the part about being curious that's so good... I'm sure you can't wait for the snow to be gone (for a whole lot of reasons!) now.

That's interesting about the echo ring/bandstand. I wouldn't have guessed either one. I'd much rather ice skate than watch hockey...and I'd much, much rather be at the beach on a warm sun-shiny day! I thought our temperatures were cold, and we haven't hit zero yet.

Well ya had me fooled, but then I don't get out much or play in a band in the park. The echo circle would work great for Dirt and I, we don't seem to be able to whisper, its like we are perpetually in an echo circle. But I thought and echo was... Oh well I'm sure they are fun things to have in parks.