There is a totem pole in town, near the courthouse. It was a source of entertainment for Chance and I one day.  Far Guy was getting his Drivers License renewed. 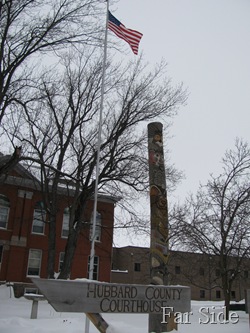 I drive by this totem every once in awhile, yet until I began to photograph it, I had no idea what animals were on it. 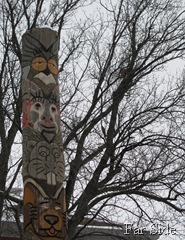 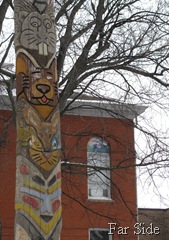 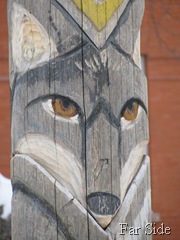 The lowest animal on the totem is a wolf..the highest is an eagle just above the owl. 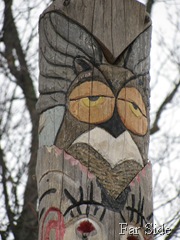 Ha..you would have missed it..I almost did too..but it is there..it is just not real noticeable. 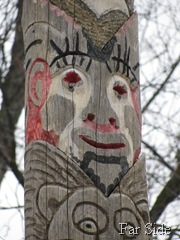 This guy is third from the top, I take it that it is a man or is it a monkey? 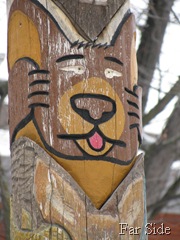 The carver had a sense of humor.. 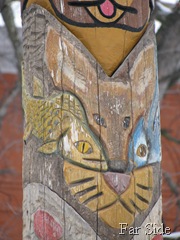 He or she also successfully merged four creatures in this section of the totem..Deer, fish, bird and cat.
I know there is much to be said about totems..my take is that they are artwork..just in a different form.  Sometimes art work is in the form of words..sometimes they compliment each other.


I think I could turn and live with animals, they're so placid and self contain'd,
I stand and look at them long and long.
They do not sweat and whine about their condition,
They do not lie awake in the dark and weep for their sins,
They do not make me sick discussing their duty to God,
Not one is dissatisfied, not one is demented with the mania of owning things,
Not one kneels to another, nor to his kind that lived thousands of years ago,
Not one is respectable or unhappy over the earth… Walt Whitman ( from Song Of Myself 1891)


Today is the last day of a fairly long January that brought us more snow than normal, some cold temperatures but nothing out of the ordinary for us people who live in the frozen tundra they call Minnesota.  I hear a large storm is brewing for much of the nation..we are north of that storm..so we will just get a couple of inches of snow and below zero weather. Just another fine day in Minnesota:)
Posted by Far Side of Fifty at 11:26 AM

I am tired of winter...ick.

That totem pole is entertaining, but certain different to the Haida ones we see here.

animals or so adaptable, I whine.

I don't pay much attention to what totems are supposed to be all about. It is just art for me as well. Dig the amalgamated animal.

The storm is here ... we have nine inches since last night and it's still snowing. Holding our breath for the wind. Stay warm.

Very interesting totem. Thanks for all the pictures.
Glad to hear the worst of the storm will pass you.
:)

Ah yes, we are in the path of that fine storm...I am watching expectantly, yet hoping I can still beat the storm home tonight before it starts in earnest. I am thinking tomorrow may be a snow day... yay! I would love to be able to stay home.

Your totem is very interesting, and yes, I would easily have missed that eagle at the top!

Those are cool animals on that totem. I like the composite one and you're right: some look suspiciously like people I've met. :-)

That totem pole is lovely! What a great find.

Love the totem poles- don't see any around here. Guess the storm will bypass us-YAY!

Wonderful post and photos!
The snow storm I heading our way
to South Western Ontario !
Have a warm and wonderful day !

Those pictures on the pole are great - - - especially the face with four animals. I admire people who have that kind of imagination and can take the image from their head and make it appear in a tangible form for the rest of us.

Cool totem. We have an Indian Chief Osceola sculpture down south to remember the town's namesake. In fact the schools mascot is an Indian. Clarke Indians.