I am a curious person.  Are you?

Today I want to show you an interesting structure ..it has been in this park as long as I can remember. 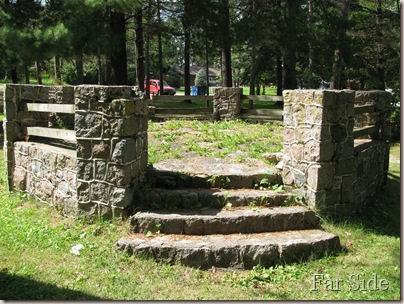 It is built totally out of rocks/stones. 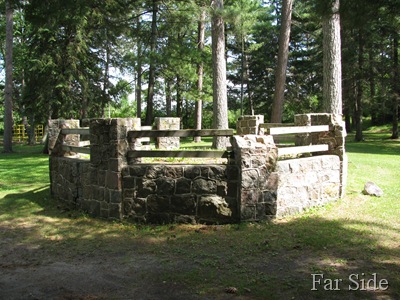 It is falling into disrepair.  Many of the stones are loose. 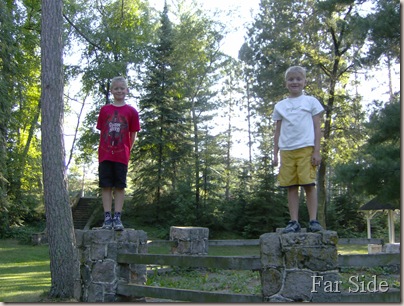 August 06, 2008  I took a photo of the Grand boys..they almost look the same height..because I told them where to stand on the rock columns of the ring.  It makes for a great optical illusion. It makes Adam look taller than Noah. We were in the park that day searching for a Geo Cache. Everyone else was wandering around in the poison ivy.

When I took this photo I had no idea it was an Echo Ring.  The next summer my curiosity was stirred up by a mention of what the repair costs would be for the Echo Ring..it was only then that I put 2 and 2 together…and figured out what was being talked about.  ( I do not remember what the dollar amount was exactly..but it was an obnoxiously huge sum.)

Have you ever seen an Echo Ring/Echo Circle before?  If so where?  Please share!

It was only –18F last night..it is warming up!  For those of you that thought it was actually 50 degrees in our house..that is right next to the window.. that sensor in order to read the  sender that is on the garage must have a clear path to pick up the frequency..hence it’s placement in the kitchen window.  Elsewhere in the house it is a balmy 74 degrees, sometimes warmer than that, with outdoor wood heat we can keep the house very comfortable:)

Update: This is not an Echo Ring ..it is a bandstand.  If you go up those far steps in the last photo you will run right into the real echo ring.  I thought that ring was just a campfire ring because it had the remnants of a campfire in the center.  Next spring I will go back and take another photo.  I apologize for any confusion that this has caused.

I am always curious about why it seems to cost so much to provide the public with art and entertainment. Especially when no one seems to know how to use or view the item in question. Too bad they didn't spend a little bit of money on a plaque that explained the echo circle.

Please enlighten me -- what's an echo ring? I was thinking the picture could have been the space where little bands used to play for the people in the park. I was wrong. Now I'm curious.
Peace,
Muff

What a beautiful structure complementing the setting. It looks like it encourages just sitting too and taking in the beauty.

That is so unusual. I can't begin to imagine what it was used for. Kind of looks like one of those bandstands that were built years ago for Sunday music in the park. It seems a shame to let it fall into disrepair. Too bad it isn't being restored.

Well I'm a curious person:) If you tell me not to do something, not to go that way, not to touch that, you'd better tell me WHY:)
So of course I googled Echo Ring, and didn't find much, but if I googled Echo Circle, had a bit more luck, and found this http://blogs.landfood.ubc.ca/tiffanyt/tag/echo-circle/
(and kind of cool that it took place only an hour away from me:))
So my guess is that at one point, if you yelled, the only place you would get an echo back would be standing in the center of that ring, or at least within the ring. That might have changed now with the trees growing up, etc.
When I first saw the photo I thought it was the foundation for a gazebo:)

Oh praise the Lord, I feel better now!!! I just couldn't imagine your inside temps and livin' through it. Heck, I wear sockies to bed in the summer!!!

God bless you sweetie and have a marvelous weekend!!!

I'll get right on the case next time I head up to Mantrap. :)

Very intriguing, and I had not heard of an echo ring before. I love mysteries.

There are echo circles at both Concordia College in Moorhead and inside the UMD Library in Duluth. I'm not sure if they are common feature of college campuses or if my children both chose colleges with this unusual feature but it's very fun to stand in the middle and whisper.

Well, I am also glad to find out that the inside temperature of your place is not that cold. I never heard of an echo circle but it does make sense it has something to do with shouting and hearing an echo. That also would change by changing the landscape, so it must be just for fun... right?

What great comments explaining such a neat construction.
Perhaps they used to sing there, or something, since it's outdoors.

I think saw something like this at Perdue University, Indiana. My recollection is that the person sits in the center can hear persons whispering from the edge of the ring. The one I saw was larger - if you clapped your hands in the center it sounded odd.. like a squeak noise.

Does this ring have an exit opposite the entrance?

Iggy, Nope only one entrance:)

HI. I found your blog from Blissed-out Grandma. I have never heard of an echo ring. I like you blog and I'm a new follower.

It reminds me of a place in a park for a small band to play their tunes. I would love to have my house get up to 74 degrees. We were 65 degrees this am and I had to crank the thermostat to beg for more heat. We have a guy on the edge of town who sells the outdoor wood burners and of course corn burners too.

I to have never heard of echo rings, sounds intreging! I cant stand the house being to hot as I am going through the change of life its funny I am sweating and poor Papa just wears his cardigan or sweaters cause hes chilly lol we keep our house about 68 degrees as it is a small house and well insulated the wood stove keeps it a nice even heat through out! Interesting post, have a good day !

It's a lovely structure! How does an echo ring work?

There is something like that in Houston Tx.
Glad you are warming up.

Never say one, until now.

It's a neat looking structure!

I have not heard of an echo ring either!