Back when Far Guy managed the local Hockey rink in the winter, I worked for him part time…especially during games..you need a few extra people that know how to move nets and someone that can answer questions and someone who knows how to change a roll of toilet paper in the ladies room. We have watched just a few youth Hockey games.  So much so that when the National Anthem is played at any event..when it ends we look at each other and say “Let’s Play Hockey!” 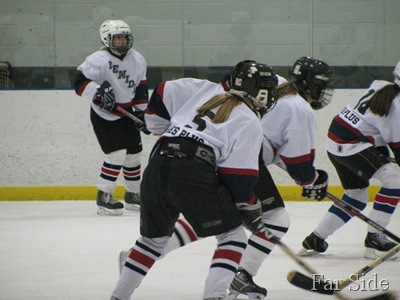 In the black helmets Paige and Madison

Our Grand Girls are all Hockey Players.  They are physically strong aggressive little girls..and are a bit..no maybe a lot in your face when they play hockey. They are not the grab your hanky dab at your eyes kind of girls. 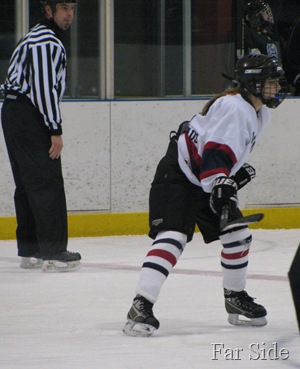 Recently we caught part of a game, both Madison and Paige are on the Girls 12 and Under team.  They won in overtime  3-2 it was a good game. 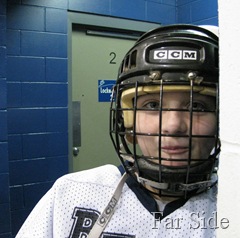 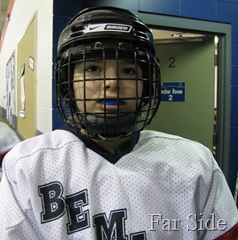 They have learned all about teamwork, and taking direction from being on a Hockey Team.  They have formed friendships with many other like minded little girls, they are very busy with practices, games and tournaments.

Savannah is on a different team (14 and Under) and plays some Junior Varsity games now..we hope to get to one of her games before the season is over:)

My great-niece, Nicole is a goalie on a youth hockey team in the Cities. She LOVES hockey! I live too far away to attend any of her games, but I get regular reports from my sister - the proud grandma.

It was always a semi-secret desire of Bet's to play hockey. Not a big sport here in the lovely damp, grey, tepid PNW.

Fun times watchin' kids you know do some challenging things! And succeed!

Love those tough girls in action!

Growing up in the south, I knew nothing about hockey but certainly do enjoy watching the games on tv now. John, of course, grew up playing hockey. Good for the girls for learning all about teamwork and making great friends. Thanks for sharing the photos.

Funny that you should have this post as hockey has been a big topic at work this morning. The department went to watch a coworker's son play (except me - I went skiing). I guess the refs were really bad and since they weren't calling penalties, the teams got mad and really started tripping people until a big fight broke out. Pretty disppointing.

How exciting that must be to watch. It sounds like the girls have inherited their grandma's spunkiness. I love the fast action of a hockey game...the in your face stuff too:) I wish one of my grands would take up the sport, so I could root and cheer on the sidelines. Good going Grandma Far Side - you've got some really great girls.

I laughed out loud trying to picture those two dabbing at their eyes with a wee little hankie. LOL!!! They do look intimidating, and they are just kids! At least I think they are :-)

Good for them with their great athletic ability. When I was in high school - - - three thousand years ago - - I played a very little field hockey. I quit when someone whacked me REALLY HARD in the knee - - just above the shin guard. (They didn't cover the knees in those days.) Years later, that same knee got hit in a car accident. Guess which knee had arthritis years before the other?!!!!
P.S. Your pics are GREAT!

Your movement pictures are so clear...great job sweetie!

God bless and have an awesome weekend!!!

That's the spirit. I don't know how much hockey they play in the Greeley area. 4th grade grandson play football this fall. This winter he's taking ballet lessons. It's a new world out there. :)

I love it!!!! Way to go, ladies. Show them we are not pink and lacey but tough and strong as steel.