Yesterday we heard that there was a wolf in the area.  We saw him earlier in the winter, although there was some argument whether he was a wolf or a coyote.

Well the proof is in the tracks. 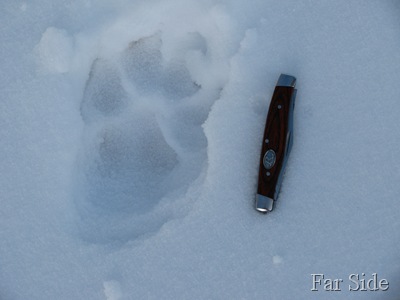 Far Guy says that this guy is twice as big as Chance..and Chance weighs 60 Ibs.  There was a little new snow ..so the tracks were fresh and easy to spot. He seems to have been hunting rabbits.

It was a great afternoon to see where the deer have been. 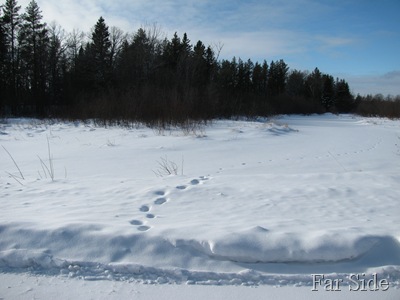 This is the Dead Beaver Area in the dead of winter. It looks safe enough..but there is quite a current under that snow cover. 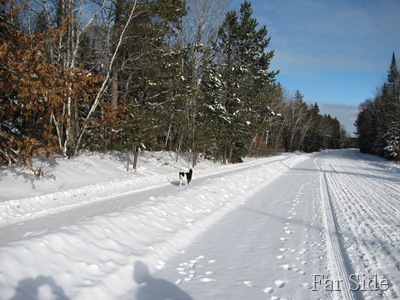 This is where we found the most tracks.  The wolf was using the road as a trail. We let Chance out of the car..to get a good smell of the area. He liked walking the groomed snowmobile trail!  Apparently the wolf was not in the area..because Chance was quite happy. 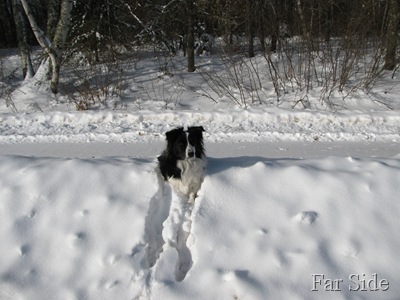 He chose to come back over the snow bank the same spot he went in..and he so kindly stopped on command for a photo! He loves afternoon adventures. 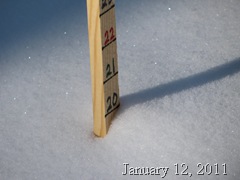 Holding at the twenty inch mark. The last snow really settled..it must have been heavy snow:)

Interesting to see the wolf tracks. I love it when you three take an afternoon driving adventure and share with us. Chance sure looks like he is having fun! We finally have bright sunshine today. I think one more day of warmer temps and we may can get out of our driveway.

I have not seen snow like that here but when I lived in Rhode Island the snow was deep. Love the trips out to see what is around.

Yep it is no coyote - it was the first time I've seen a wolf and he is big with tall lanky legs then those big feet! Our Rudy is 90 lbs and I'd say this fella was taller!

As long as he stays away from you! Do you carry a rifle with you?

Awesome photos!
I love wolves, we used to have them around our farm when I was a kid and there was a exotic animal farm in our area that raised them, they usually are very timid,I took an interest in them years ago and did alot of research on them . I did come face to face with one years ago when I was walking through the woods, wish I had a camera with me at the time! Have a great day !

Linda G, No..we do not carry a rifle..he would probably be afraid of us anyway:)

wow!!! Those are some HUGE footprints!!!

You also got quite a bit of snow. We only have about 4 or 5 inches right now but more is expected for tomorrow

I'll vote for wolf! (Shiver) (Shiver) But Chance would know if he were anywhere around, so finding the tracks are COOL!

Chance would definitely let you know if the wolf was close by. Big print there for sure. We get reports of wolves here once in a while and mt. lions as well. I'm quite sure they don't come down thru the cities. Most likely from across the river from Wisconsin ...Camp Douglas etc.

I should send Notshy to learn the stop in your tracks command. Looks like you're accumulating some of the white stuff too.

Window On The Prairie said...

We got snow earlier in the week, but not that much luckily. It's just brutally cold here now in NE Kansas. It was 3 degrees this morning with a windchill of -15. Brrrrr....
Suzanne

Since wolves are pack animals, it makes me wonder why this one is out there alone. He must have been dumped by his pack for some reason - illness or age likely. It's just me being an animal lover, but it seems kind of sad knowing he is out there wandering alone and fending for himself.

Beautiful but too much snow for me.

I believe I saw a red wolf a while back. I suppose Game and Fish are at it again. Restocking.

Do you ever have to worry about Chance running away from you to chase after a rabbit or squirrel? That's a pretty cute picture of him in the snowbank,

Miss Lynda, The squirrels run right up the trees and Rabbits are pretty fast and are usually not too far from their hiding spots. Chance has great recall..and will stop or come back when told to...no we don't worry about him taking off, he work real well off lead:)

I was thinking the same as Rae, that wolves are pack animals, so have to wonder about a lone wolf.

How would Chance react if there was a wolf around? I don't think our three would be off leash if I was concerned about a wolf in the area. They will run after a coyote, and once they get running, it's that whole pack mentality, and they don't stop right away. We can stop them from starting to run, but once they are in chase mode and all going together, it's pretty hard. Not that I would be concerned that they wouldn't come back, just that they might get attacked themselves.

I always like to see pictures of Chance. I hope the wolf stays full and healthy. Nice picture of the wolf paw next to the pocket knife. It helps to know the size.

Wow that's a big print! I was wondering, how big is the pocket knife? I'm not sure I'd be too happy to know that wolves were running around the back 40....

Great photo! My husband said he saw a silver fox the other day.

Marvellous snow pictures! You sure have got a lot of it! And Chance looks gorgeous - as usual.

That is quite a track from the wolf. We have mountain lions down here to scare people. Rarely ever seen but they are out and about and also leave tracks. Our border collie probably would nuzzle them a lot but only kills snakes.

Wow, those are some huge tracks! I'll stick with the coyotes we have here....much smaller :)