Wistful Wednesday: Then and Now

A long time ago a little village nearby was a hub of activity.  There were five beer joints and two hotels..Becky Henry’s on the corner and Mrs. John Schmaus place across the street, there were several gas stations and garages, a creamery, a bank, two or three stores..one was the JW Nunn store and one was a candy store, a movie theatre, a bank, a sawmill, a dance hall and a church..maybe two, and if you count the Catholic Church a mile north then it was three churches.

This is what Far Guys Mom wrote years ago:

“ I remember the large J W Nunn store and my mother( Meady) bringing several cases of eggs to the store every week to buy groceries.  Those were during my childhood years.  Also riding to Sunday school by horse and wagon to the Baptist Church in Ponsford.”

“ As a girl my best friend ( Nellie’s) father had a confectionary store with candy galore, so I was always treated when I went to her house.  His name was Bob McDougal.”

“We always looked forward to July 4th as the Indians had a big “powwow” celebration and people came from miles around to see them dance.” 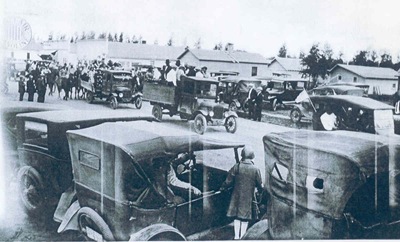 “Ponsford was a thriving village back in the 20’s and had very neat buildings.” 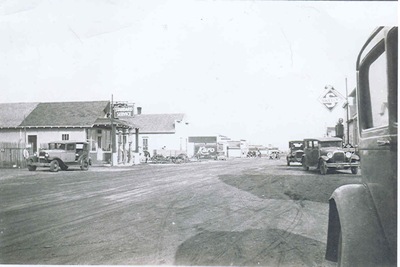 These old photos came from the Nunn and Crandall families via my friend Shirley.  Thank you for sharing!

Today, you would never know that Ponsford was a destination at one time.

I stood in the middle of the highway and took these photos last week. 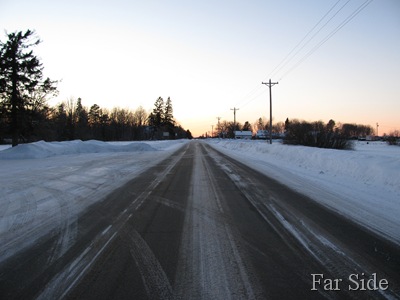 Down by the second utility pole in the photo above would have been a Hotel owned by Becky Henry on the corner. See those shrubs off to the right..that is where the bank was. 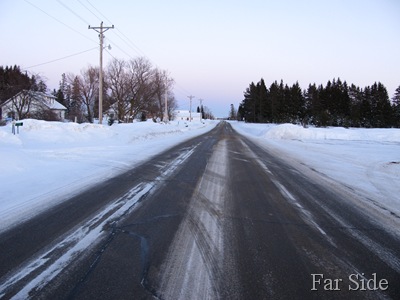 The old creamery was in the north east part of town someplace on the left of this photo.   Nowadays  Ponsford has a Fire Hall and a Post Office and two churches, three if you count the Catholic Church a mile north..only two churches are being used and a number of houses..some occupied some vacant. 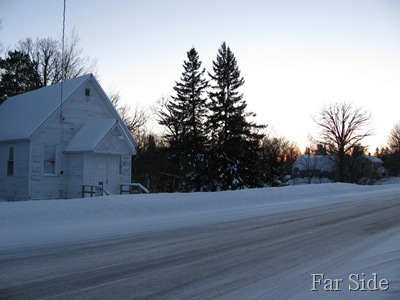 This is the church that is not being used.  I believe this is the same spot that the Baptist Church was located that Far Guys Mom talked about.  It has probably been rebuilt a couple of times since the 1920’s.  The Schmaus Hotel would have been right next door where the big pines are.

I found it curious that both hotels were run by women..I guess it was probably a good business for a woman back then..cook and clean..repeat when necessary:)

I love the old photos and stories of times gone by. Sad how times have changed.

"Cook and clean... repeat when necessary" I don't care who ya are, that is funny, as Dirt would say. Thanks for the tour of Ponsford. funny how some places shrink to nothing and other places bust outta their seams.

It's always interesting how places change over the years. Usually a place 'dies' when opportunities for employment dry up.

Thanks for the tour. It looked like a busy place maybe on a Saturday.

I can remember those egg sellin' days. I would gather the eggs as soon as I could reach the nest boxes. Mom would sell the eggs to a local MFA. She usually received enough to buy more chicken feed, the weeks groceries and material for a new dress.

I always enjoy goin' through your old pics. I've been tryin' to organize and label mine better.

I find this story very sad. Of course, some was due to the fact that the North Country was largely unsuited to agriculture. Still its happened in the Southeast. The land remain farmed, even overfarmed, but families are long gone. This state is hugely unbalanced, "Greater Minnesota" is a joke. There is development is a few regional centers (Rochester maybe St. Cloud) but not many. Only the Metro counts....

Seems really sad to have a community just fade away like that. I have seen the same thing with rural towns around us. One or two buildings are all that is left to mark the locale and sometimes a weedy cemetery. Everybody leaves and moves to the "city". Personally I prefer living in a little village.

With the increase in population, it's a mystery to me why so many of these little towns disappear. I guess it's true that employment opportunities are mostly in the cities, and that's why people move away.

I like a smallish town with a university, which is where I've lived most of my life. Different towns, I guess Boulder was a pretty big small town. :-)

I love history. It's always sad when nothing (or very little) is left of it.
Are there still any Indians in the area? Do any of them powwow any more?

Linda G, Oh yes we go to the Pow Wows every summer and yes there still are Indians on the Reservation:)

I'm glad to hear that you still enjoy the Pow Wows. :)

Great glimpse into the past. It does make me nostalgic for small town culture. There was a time when a store or business reflected the personality of the owner. Now, they're all the same.

How nostalgic! What happened to these lively places? Did they just shut down due to lack of interest?

Such an interesting history of Ponsford. Sad how time erases the memory of a town. Thanks to you for giving us insight to the good times of a town nearly gone.

Hi - seeing these photos, Ponsford sounds so very much like lots of small towns here on the VA eastern shore, including Onley (pop. 500) where we are now living. Back in the days, it was a thriving produce area, especially for potatoes and strawberries. There was a produce exchange, railroad, movie house, hardware store, gas station, banks, dry good store -- all gone now, but some of the buildings are still around. Your post got me to thinking Grenville and I should do one for soon for this town. We are not natives, but "come heres" (local term) from NJ.

My hysband us great grandchild if Becky Henry! Do you have a y memories if her?

My husband is great grandchild of Becky Henry. Did you know her?

Hi Andrea, I did not know Becky Henry but there are a few old timers around that remember her. The next time I see them I will ask them what they remember:)

We were there yesterday. Most building of my mother- in-laws 1942 memories are gone. Can you clarify where the evangelical lutheran church would have been?

Can you clarify where evangelical lutheran was? We were there yesterday and took pictures.

There are two churches left in town, the one in the photo and another near the edge of town it has a sign... and is right next to the County sand storage area...it has a cross on top of the building (North side of the road)