I have written about Far Guys Gene Autry collection before. 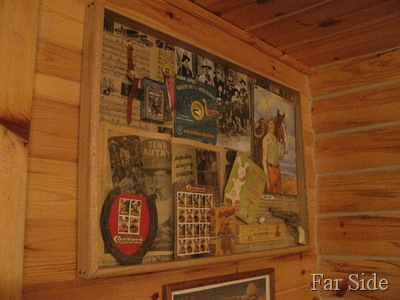 It all began with a cap gun that he had as a child.  He built this frame as a display to hold all his memorabilia.

We just kept collecting..a record here..a little lunchbox that holds Gene Autry trading cards..some books..and then they came out with the postage stamps.   I located an old horseshoe and framed a few stamps. Then I decided it needed a whole sheet of Cowboy Stamps.  Finally there was no more room and the lunch box never fit..it was too thick for the frame. 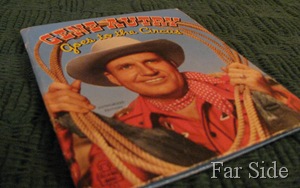 I thought it was perfect. 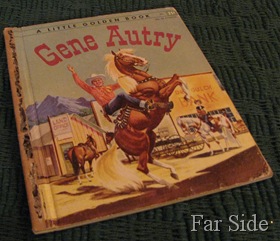 He was going to leave this one behind..because of the price tag..it was a tad more than the 25 cents that it originally cost. How much of a tad..27.75 more than a tad..but she was having a sale..so I snagged it for 14.00.  No, I have not checked what they are going for on eBay or elsewhere. I had the opportunity to purchase this same book years ago for 5 dollars..Far Guy thought it was way over priced then..this time I didn’t pay attention to him..so I am now the proud owner of this book..and he lets me keep it with his stuff. It has Gene Autry’s horse Champion on the cover..it was a much better find than the book with the silly old rope..besides that mine is a First Edition!!

Far Guy built a new case.. it is the same size but deeper, the lunch box fits now. The lunch box was a gift from daughter Jen. 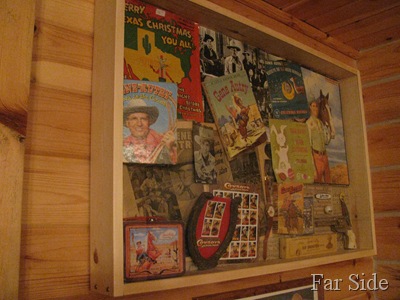 This part of the wall in the living room is Far Guys.. 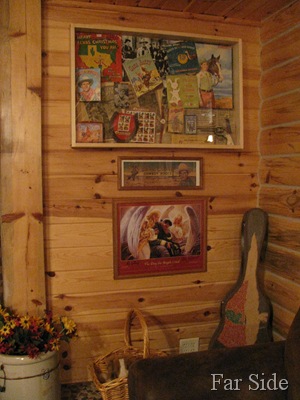 The old Gene Autry Cowboy Boots ad was a gift from Jen as was  “The Day the Angels Cried” 9-11 print. (* Click to enlarge)

Far Guy says “WE are done with this collection, everything fits.” :)