Last summer at Auntie Esther’s garage sale, Far Guy got three gifts from his cousins Bonnie and Jay.  Family treasures that have been passed down, from one generation to the next.  These items all come from his Great Great Grandfather..or in one of those confusing statements..his Fathers (Marvin), Fathers (James), Mothers (Martha Jane), Father (Xaver). Xaver was a tailor in Philadelphia before he settled into life as a farmer in Harrison County Iowa. 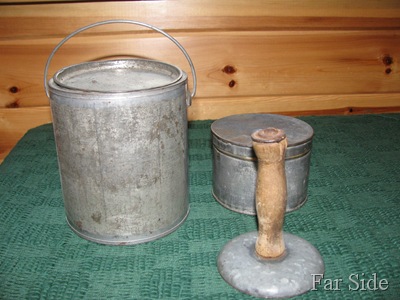 The first item on the left is a lunch pail.  I wrote about it back in August. The item out front was a mystery item that I wrote about in July..it is a hog scraper.  Now for that third little item in the back.

It has a cover that fits quite tightly.. lets look inside. 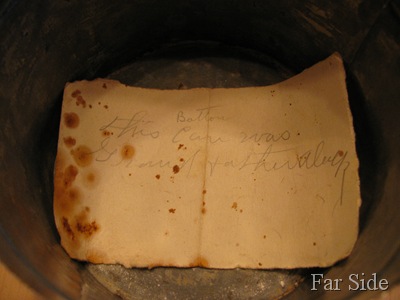 The note says: This Button Can was Grand Father Aleck.  From this note we can date this button can earlier than 1860.

Inside the button can is another mystery. 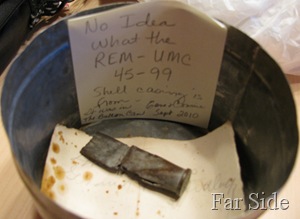 I added my own note: No Idea what the REM-UMC 45-99 shell casing is from, it was in the button can. 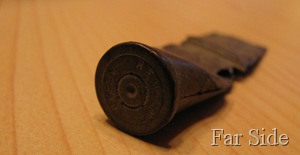 It remains a mystery.  Perhaps someone found it..and with lack of a better place put it inside the button can.

My Nephew Hunter who lives next door did some research for me:  The spent casing is from a Single Shot Winchester or Remington. The 45 is the diameter of the bullet, and the 99 means that in the old black powder rounds it would take 90 grains of black powder. This shell would have been from after 1912. 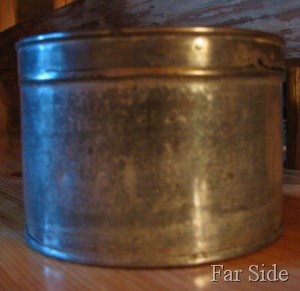 It is a pretty little button can, with a patina all its own.  I wish it had some buttons inside of it instead of an old mystery shell casing and two notes.  I can only imagine what a delight it must have been to open it when it was full of buttons…I would have put my hand right in and let the buttons run through my fingers:)

Lovely gifts to have, and the button can would be nice if filled with buttons, but I'm still getting over the "hog scraping" from your hog scraper post! Despite being a farmer's daughter, I'm very glad I didn't have to do any Hog Scraping - it might have put me off bacon rolls :-) Jo

Cool treasures! I love that Hunter looked up the shell for you.

These certainly are treasures! I can just imaginea big collection of buttons in there!

Neat treasures and I had not heard of a button can before.

I have a button collection from my youth.

Those are awesome treasures, Connie!

I once received a sewing basket from a friend whose mother had died. She didn't sew and offered it to me. Inside there was a plastic container just filled with buttons. They were amazing to look at. When I moved from Boulder I gave them to the Good Will. I think it would have been wonderful to have them in their own can!

You are giving me new ideas on blogs but it will be awhile before I can get them together. The button can could have even been another function before it had buttons in it. I have seen buttons shipped in rough cut boxes in an old sunken river boat display in Kansas City. My mom always got her rendered lard in large cans like this from the butcher. I had forgotten about that until I saw these items.

Wow, he had a lot of rocks. Some look like good keepers and others maybe should have be "leverrites", leave them right there.

I love old things and the stories behind them!

I think, it's a very important and worthy treasures....I'd like to buy one...

How fun to enjoy family heritage so much. You and my sister would get along famously. She has done the genealogy for us. I like hearing the stories of our ancestors. It helps us understand a bit about their personalities and actions. Perhaps we (or I) might have been more patient if we knew the motives for their insecurities or quirkiness. Also, it might have even given us an even deeper love for them when we knew of their sacrifices for us.

I hate to admit this but I don't like to think of all the family treasures I threw away in my youthful ignorance. Starting with this large ugly chipping yellow painted thing that I inherited and used to store firewood. Only until battered, bent and broken I discovered it was made out of copper. A boiler used on my great grandmothers pioneer farm... Grrr...

It's good to keep those - they don't make them like that anymore. Most people will lose old stuff when they move house, etc.

Thanks for stopping by at The Farm with your comment.

All of them are unique and so wonderful. I love old things like this. It's fun to imagine the history behind them.

That is so neat - especially because at first glance, that is something I would have just passed over.

There is something so fun about a bunch of old buttons. But just having the button can and the other items from so long ago and that is was a relative is so amazing. What treasures to pass to the children and grandchildren.

How wonderful! Such great pieces of history to treasure. :-)

Can you imagine what wonderful things he made...

Pretty cool! I just discovered a cousin's photos of my grandmother as a young woman. It brought tears to my eyes.

We were gifted a little ivory letter opener with Great grandmother's name engraved on it: Vesta. We have it to our youngest daughter to treasure.

We also have a little leather tobacco(?) pounch that belonged to great grandfather John, from another side of the Family Tree. My husband has it on his desk somewhere -- and we probably need to find some place to keep it safe. Auntie Fern had it in her desk and she gave it to me. She was worried that she might not make it to her 102nd birthday in April. It needed to stay in the family and she knew that we would take care of it.

Wow - what wonderful relics: physical memories of your family!

What amazing family treasures. I absoultely cherish these types of items from my family.