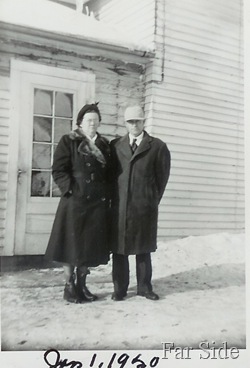 This is my grandparents the year before I was born.  They are all dressed up for church.  Remember those rubber overshoes like my grandma has on? All the ladies wore them in the winter..so they wouldn’t get their good shoes snowy or wet. Grandmas were the fancy smancy ones..they had fur at the top. 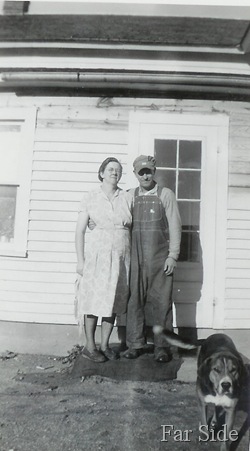 This is a summer time photo around the same time..give or take a year or two.  This is how I remember them dressing every day..Grandma in a house dress and Grandpa in his bibs with his engineers cap.  I think that is Dixie..they had a few Dixies in their time..Dixie would have been a cow dog…she would have went to the pasture and brought the cows up to the barn for milking. Dixie would have understood both English commands and German commands.

This is the house where I learned to play “Annie I Over” one summer Sunday afternoon.  Now for the younger readers..this is how you play.  You split into two teams, one team on each side of the house.  You throw a large ball over the roof and holler Annie I Over!  Then you wait..if the kids on the other side of the house catch the ball then they will sneak around the house and tag someone with the ball and then you are on their team. If no one catches the ball they are suppose to holler “Pig Tail” and then it is their turn to throw it over..always hollering “Annie I Over” as the ball goes up and over the house. It was a great game full of throwing, anticipation, running for your life to the other side of the house..and giggling..lots of giggling:)

The name of that game is familiar, not sure if I ever played it.
'Kick the can' was what we played mostly, which was a variation of hide and seek where you had to try sneak back from your hiding spot and kick the can before the seeker did.
The only dog that Larry's family ever had was called Dixie, and she was a Boston Terrier:)
Then he met me, and my dog, and six dogs later, here we are:)

Annie over was always so fun until someone spots the ball down the chimney. Game over.

We used to play that all the time too! So fun with our city block of kids all congregated at our house.

I do not remember that game but do remember throwing the ball over the house. Your grandmother looks similar to mine. Grandma and Grandpa had dogs that would help with the dairy cows, too. We children always thought it was great fun to help herd the cows in from the far fields when it was time for afternoon milking. We found it fascinating they knew the way.

Oh, man. I forgot about that game. I wonder how it originated give that "Annie Over" and "Pigtails" doesn't seem to have a logical tie to the activity. I guess only an adult would look for logic and meaning.

Now that sound like fun, but with the house I have now, you sure couldn't do it. The roof is too high ;) Love the boots, not even mine have fur at the top ;-)

Ah, good times, and nice photos of your grandparents.

Great pictures and memories Connie. My grandparents dressed much the same but here in the south, I don't remember anyone have fur lined over shoes, just rain-proof ones. That game sounds like a lot of fun and is not familiar to me. Thanks for your kind words about Kaboodle.

I suppose the old song, Those were the days..right now...

We never played that game. My childhood games were hopscotch and jacks. I got pretty good at jacks and wore my fingernails down at an angle on my left hand where I scooped up the jacks. :-)

What a cool memory!

those are some wonderful memories!

I have to say I remember wearing rubber boots as a little girl (remember how HARD they were to put on??)

I do remember my Grandmother having the ones with fur too! Had forgotten until you mentioned it...simpler times...wonderful times...thanks for the memories!

Thanks for the reminder of "Aunt I Over." We played this at the country school I attended and it was lots of fun when we didn't have much other equipment to play with.
We can make comments about Grandma's over shoes but they were extremely practical.

I played that game when I was little! And, your grandparents bear a striking resemblance to mine! Very cute. They could be in the American Gothic portrait. Thanks for the memories.

I absolutely LOVE the summer photo of your grandparents. It reminds me of my family.

That was a fun read. It brought back a lot of my own memories of playing games at grandma's house. Amazing how much your grandma looks like mine. They all had the very same look back then.