Well what is a little more snow..we still have room for taller snow banks. 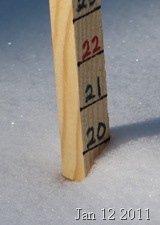 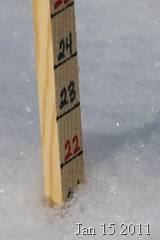 We are not even up to the top of the snow stick yet.  This last snow brought a little more than an inch of the beautiful white stuff.

We went for a ride..Cabin Fever..that old in the middle of the winter feeling..do something even if it is wrong.

We looked for animal tracks..the snow plow had gone on many of the roads obliterating the tracks. The most exciting thing we saw was a jet trail underlining the moon. 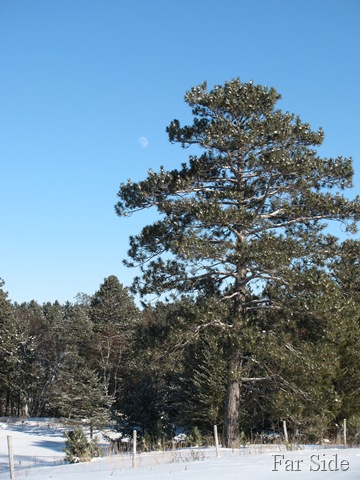 This is a Norway Pine, Pinus resinosa, it is the State Tree of Minnesota.  In other States it would be called a Red Pine, here in Minnesota where we do things our own way and make up our own rules..because it is so cold we call it a Norway Pine.

What else do we do to ward off Cabin Fever? We watch Fighting Sioux Hockey ..last night it was the University of North Dakota Sioux vs. the Minnesota Gophers..Friday night it was much more interesting because there were lots of fist-de-cuffs..and shoving.  I heard that one dead animal type gopher made it out on the ice..it used to be a tradition that the Sioux Fans would throw them out..not so much anymore.  I wonder how many gophers were confiscated by security?  Far Guy and I both watch from our respective couches. I nap in-between fights and goals, Chance lays by me since I will scratch his back until I nod off.  If Far Guy gets excited and jumps up off the couch, Chance is immediately awake and ready to go leaving me in the dust.

Uffda..Ubetcha..things are really exciting up here in the frozen tundra of Minnesota:) 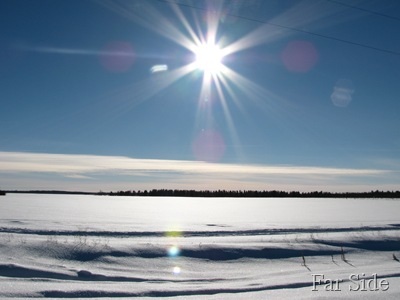 I think the snow is beautiful. I am so tired of looking at mud - squishing in the mud - wiping mud off the dog's feet, cleaning it off the floor.... and I also know that if I had 2 feet of snow, pretty soon I'd be complaining and wishing I was back to mud.

So - I'll live vicariously through your pictures and dream of snow.

Weather here today and all week is 50's-60's, sunny, dry and beautiful! Our snow is finally almost melted.

We are sending some more snow your way. We've had snow for a week all through Western Canada.
Our average January snow fall is 15cm(6 in. I think). We've now had 21 cm. Oh well great cross country skiing is coming up!

Great pictures - The last one is WONDERFUL! -- I haven't mastered the manual settings - to get rid of the blue tinge to the snow..... need to take some time.... BEAUTIFUL PICTURE!

Gasp! Just as I sat down to write this, I saw the first rays of the sun in DAYS! (It's gone now.) We don't have any snow here, just rain. But not far away in our High Country, more than five inches of precipitation has fallen, which would I'm sure obliterate your snowstick! Cool picture of the moon and contrail, BTW.

I am cold just reading this!

Aw. I do understand cabin fever. Great pictures though! :-)

I love that last picture! I have to say that we get a lot of snow up here in the east but where we are in the state we don't usually get quite that much.

Wow, I've lived in MN nearly all my life and I never knew Red Pine and Norway Pine were the same! I admired huge red pines in the wilderness, and my family had Norways as Christmas trees, and never the twin did meet. This is really funny to me...thanks for the post!

Twain. Never the twain did meet.

Totally understand the cabin fever. It has been cloudy and snowing here at my house for over a week. Can't go out for a walk because "some" people around here don't believe in shoveling their sidewalk (even thought it is a city ordinance). So I am stuck in the house all day long looking at pictures of tropical islands :)

Vell I got da cab fever here, da tractor cab fever. Could be fist-de-cuffs..and shoving in dat thing too.

Sounds like you've evolved a recipe for dealing with the long winters.

Only 4 more months to go!

the last photo is simply gorgeous!

It's about the same down here. Not much happening. A lazy boring Sunday, except it is football at our house. I enjoyed your photos. The last one is gorgeous.

It's pitiful here in the south. People got cabin fever in only 3 days! I have some friends who used the time (3 days) to deep-clean and organize some closets, drawers, etc. I have another friend who plans themed meals/lunches for guests. I love attending those events but don't have time to do that myself - - - or shall we say, "It's not my gift."

I must admit, I no longer like snow! Looks like you and I will have to move to FL! That last photo sure is a beauty. You are making John's snow stick look pathetic!

Quite the tundra ya have goin' on up there. We have ice comin' down outside my window and it's startin' to hang on the power-lines and fences. Ewwwww...ya gotta hate that slick Ozark ice.

I just got back from southern Texas with my whole family. We had Dad's memorial service last Wed. It's good to be home.

God bless ya sweetie and have a grand week.

Yup same here, cabin fever, sounds just like us only we watch movies and nod off on our couches lol yes with the dog as well lol. Love your photos. its really cold here today min 14 below brrr, I have had enough of it even though it pretty for my photography but to cold, Miggy loves the snow but I cant stand it when she comes in covered in it and caked in between her paws ! Come on summer ! Have a great day !

Your sun shot is amazing and once again, I shall say, too much snow for me!

Hmmm, Dirt's little Swedish grandmama used to love to watch "professional" wrestling. You gals of scandahovian descent seem to like a good fight now and again.