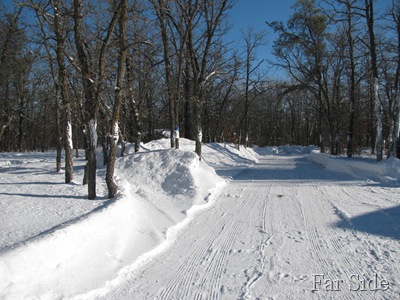 The 'one word' resolution must be the thing for the new year. I have heard others mention it on their blog. It's a good idea. I am fortunate if I can remember one thing so why add multiple resolutions to my brain?!!!
Your scenery is GORGEOUS. And I don't have to imagine how cold it is - - I can just step outside since we are close to freezing but then will be below freezing a couple days at least - - - - in the South!

I like the idea of the one-word resolution. I've been pondering, haven't quite made the choice yet. Stay warm!

I like to practice kindness by commenting on the blogs that I follow (as well as many other things on a daily basis) and...taking the time to respond to each and every comment that I receive.

My philosophy is, if someone is kind enough to follow and leave a comment then they warrant the same kindness extended to them!

Have a great day!

Tree Coffin!!! LOL - good one! I think Kindness is a good resolution.
My resolution for 2011 is to RIDE MORE! (And maybe HOUSEWORK LESS!) I'm into two word resolutions...

you make my day just reading your blog.(so funny )

I heard that a good "list" is one that is listed in the positive and not the negative. I think that is a great idea, removes that implication that I was all screwed up last year.

Ah your picture is so lovely, so bright and clear and lots of light, direct and reflected in the crystal clean snow....

You are in fine humor on this brisk day. You have earned a full out guffaw. I am totally with you on the dumb shits thing. If the world was populated by people as smart as I am, there would be world peace, polite drivers, 4 day work weeks, and a chicken in every pot.

There are lots of dumb shits out there in the world...

Kindness and patience are both good, for sure. Thanks for making me smile. :-)

"Kindness" is a great idea - you can apply it to virtually everything :-) Happy New Year from Jo

Kindness is a year round tradition in this household... especially on the female side of it. I'm all for that too except among those d.s. people who have fringed over into toxic. Then my resolution switches over from kindness into total avoidance. :)

Kindness is a good one, Connie. And being kinder to those dumb shits out there is a great way to start! You sure made me laugh with this one. Thanks for the kind grins. :-)

I am still chuckling. Good luck as there are so many of them.

My one word for the year is to laugh! I would be nuts to eavesdrop here....I'd die of boredom.

I laughed out loud when you said: "there are a lot of dumb shits out there in the world and I should be kinder to them".
hahhaahhaa (*snort*) bwhahahahaaa

As the saying goes, got to be cruel to be kind ! I figure if some one is nice to me Im nice to them but if not pay backs a bitch !
Your photos are wonderful! Have a great day !

I love your one word resolutions for the year. I always try to come up with a theme for the year instead of actual resolutions - sometimes it works, sometimes not. We can all benefit for being more kind, hope the new year is kind back to you and yours :-)

I try to practise kindness every day. It'e one of the most important things we can do.

Still winter over here too... Like your snowy shot!

Gasp!!! SNORT!!!! Honk, and I haven't even finished reading the rest of the post [oh the neighbors are going to wonder what is going on in the room next to them]. Oh, my I am going to read the rest first..........

Great shots of wintery cold. Wow, don't share that with us please.

The three biggies you list would certainly do for me!Good that you mentioned them.

I just finished reading an article about the nature of people from Minnesota. It said that it is natural for Minnesotans to be kind to one another. I can't believe you would be any other way than that.