Far Guy is a jewel of a guy, he cooks most of the time and we split the housework..

One day a few years ago I came home from town, probably after a horrible grocery shopping experience and he was cleaning up the ceiling.  Now why in the world was he washing the ceiling?  He had a hair brained idea, he had ordered a whole bunch of Jewelweed off of the Internet..it was fresh..so he put it in the blender and made a slurry out of it..except he doesn’t have a license to run a blender..so of course the top came off and green goo covered the ceiling and many other things too.   The green goo that did not end up on the ceiling ended up in the fridge.   Some of that green goo was mixed with a liquid soap, I was instructed to use it for my poison ivy..well low and behold green goo works to stop the itch and the spread of the dreaded Poison Ivy.  He tried to talk me into doing a more scientific study where I would rub Poison Ivy on both of my arms and wash one with Jewelweed green goo and leave the other untreated.. well I may be a bit of an adventurous sort sometimes..but I am no dummy. 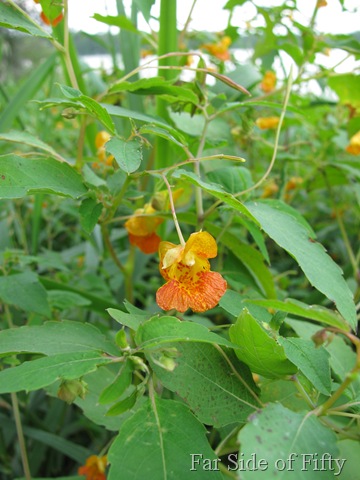 Jewelweed or Impatiens pallida grows wild here in Minnesota. It likes to grow near the lakes. It is a native plant.  It is also called Touch-me-Not, this fits it perfectly.  The seed pods shoot seeds in all directions if they are touched.  It’s thick fleshy stems hold the green goo. I have found both the yellow colored variety and the orange spotted variety.  The orange seems to grow taller than the yellow. 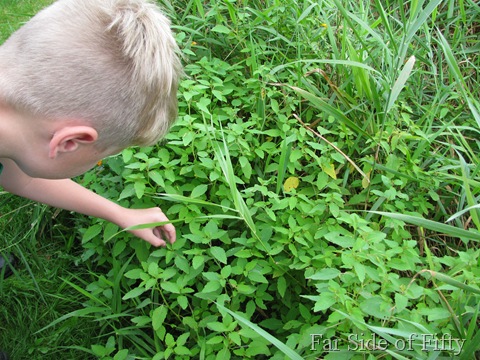 Far Guy showed Adam how the seedpods explode when they are touched..Adam thought it was pretty cool.  Far Guy took a few stems filled with green goo to a local soap maker..his idea of having his own Jewelweed soap may again become a reality one of these days.  He told the soap maker if she put it into a blender to make sure the lid was securely in place:)

Oh, this is just perfect, Connie! I am amazed at your ability to tell a story that makes me laugh so hard I have to hold my sides. Good thing you didn't take Far Guy up on his experiment!

Thats amazing, not the mess on the ceiling mind you lol. I think Far Guy has a great idea and product especially for campers and hikers to carry with them incase they come across Poisin Ivy on their trails ! Go for it, I think it would do well! I was a Product Consumer Consultant for many years . I think this would work ! Basicaly I had to find and know what products that would sell with the Consumers in each area I was given.Go for it .

Jewelweed soap is available commercially, Burt's Bees has one as do many other natural soap makers..Far Guy has ordered from various places..but he wanted the experience of making his own:)

Love this story and I learned something new too. The worst mess I ever had was a Jello concoction that "blew" up and gelled to the ceiling!!!
You two stay out of trouble and have a good weekend!!!

Why do men always forget a blender needs a lid??? Best we ban 'em. Heeehehhee!

You crack me up. I sure hope ya told Far Guy that your no test dummy!

Have a blessed weekend and a fantastic Friday!!!

Hilarious! Hope he gets his soap so he can be a "soap star".

That sounds like a great idea, but Far Guy should read up on how to make your own soap--hehe! I know I have peeked years ago and I don't remember anything about liquid soap--chuckle! This post really gave me a giggle! Sorry it was at your expense, Far Guy--ROFL! ;)

Okay, the soap story is really, really funny but I have to go back to the part that he cooks most of the time and does half the housework. I sure wish I knew your secret! That definitely is one jewel of a husband.

I have been gathering jewel weed for a soap making friend of mine. I have learned also if you are outside and know you have touched poison ivy you can rub the stems and leaves of the jewel weed on your hands and the poison won't even break out. I love finding out about all this natural stuff !!!
Have a blessed weekend

Please advise Far Guy to alwysy hold down the lid of the blender with one hand while holding the handle with the other. This prevents big problems.

What a hoot. Glad I didn't need to come over and help clean up that mess!

We had the plant with the exploding, well popping open, seed pod. I never knew the name of it.