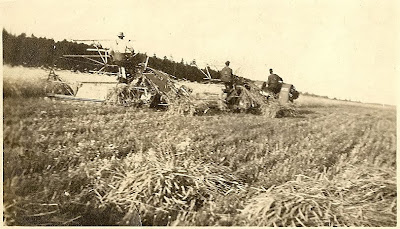 This is an old photo of Far Guy's Grandfather Abbott in the grain field.  This photo was marked with only one name, I will assume that he is the fellow in the white shirt and suspenders..the silhouette looks right for his build.  An old tractor is pulling two grain binders through a grain field. 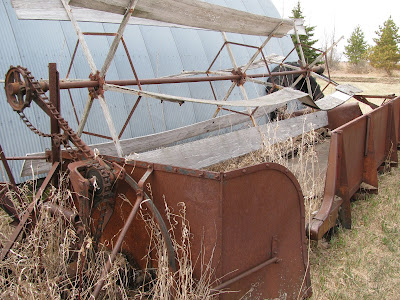 An old grain binder at a neighbors.*** Correction from Dumbo, an old neighbor. The photo of the old rusty equipment beside the building is a swather. That is like a binder, except that instead of elevating the grain to a binding mechanism, it just moved it to one end of the machine and laid it on the ground. This windrow would later be picked up by a combine and threshed and the straw left in the field.
Grandpa Abbott is steering a ground/wheel driven grain binder, it had no engine.   From what I recall of this contraption, it cut and bound the grain into bundles.    My Mother sometimes had to repair the canvas, I remember playing on it when I was little.  The canvas had wooden slats, the long section of canvas ran the full length of the machine, when the cutter cut the grain, it fell onto the canvas, and then traveled along the canvas to be bundled and tied.  Each bundle or sheaf was plopped down onto the ground to be to be stacked together.  A sheaf of grain is one that can be easily carried under one arm.  Several bundles or sheaves would make a shock of grain.  Combines made this piece of farm equipment obsolete:) 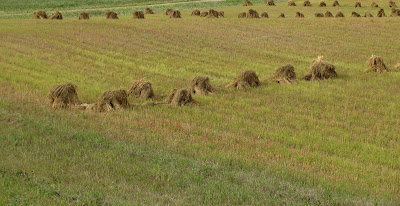 Shocks of grain in a field near Frazee Minnesota August 2009
Posted by Far Side of Fifty at 9:38 AM

How interesting! I love hearing about how the farm work was done before *more* modern times!

We still see the shocks in the fields 'round the local Amish communities. You always take me back to my childhood..to Granny and Pappy Walden's farm. Great story and your pics are amazing!

Have a beautiful day sweetie.

OH! WONDERFUL!!! I just love seeing machines from our historic past!!!

Wonderful old machines but potentially dangerous places for a child to play. But we were more careful back in the days before health and sagety became a big issue.

I witness a conversation about this just a few days ago with my brother's FIL who was remembering the days. At 94, it would have been his youth. We had canvases and lathe on our old Case combine and every once in a while Dad would take it off and fix it. Probably he could have never bought a new one so fixing it was necessary.

Oh those old photos are so great, I really need to dig mine out I have zillions, hugs Barbara

Looks like what the Amish do around here. It is neat to see shocks of grain.

Wonderful pictures. It is great for you to share history that many of us may never see.

Thank you for sharing I remember when dad and uncles and grandpa were at our place shocking and thraching. a grandtime and mom making meal I believe that they went around to each others places all working together. Love GW

Now that was hot work

we have some old photos of the mule teams that the grandparents used to harvest wheat.

I've never seen shocks of grain .. except of hay when I was a kid.

Funny how as a child I didn't recognize what a big deal it was that my folks talked with their friends and my aunt and uncle about combines and grain harvest. I suppose it would be much like when a new cell phone gizmo comes out and all the talk it receives. Now doin' farm work with nearly obsolete equipment and doing it in part 'cuz of nostalgia, I can see what a treat the change over was and how exciting it could be when you had saved enough money to afford the new equipment.

When I see these pictures it brought me back to visiting farms when I was kid, playing in the haylofts, and the hay sticking to your sweaty skin & itching like crazy--hehe! :)