At the beginning of the summer we had a list of things to do.  Naturally there was a carry over from last summer.  It was a big project..refinishing the old antique chairs and to re-tile the dining table..we have done this before..it was not a fun project, that was ten years ago, neither of us were looking forward to revisiting  that project.  Our old chairs were a pain in the neck, they would dry out in the winter and the rungs would need to be re-glued..They have been with us a long time..back in 1986  they were pink. They were found in one of the buildings at the resort under a partially caved in roof.  Sometime or another they had been orange, then pink, and finally green, I sanded them down and primed them and painted them green again..a wonderful country green.  The table was small, it had a linoleum top. Old linoleum that when you tore it off it had a black backing.  Someone built the table years ago, probably back in the 1940’s.  The table would fit six people..barely.
I bought new tile and paint for this project last summer. Indigo Blue..Far Guys favorite color.  Then I was thinking maybe I should just change my mind and do a soft yellow. 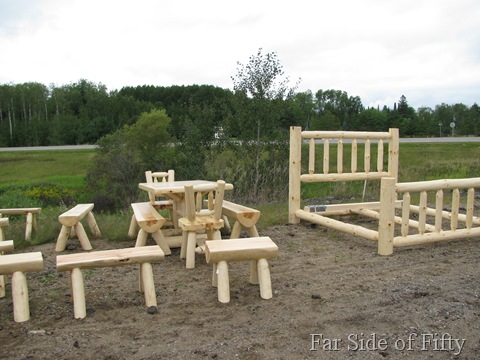 Last week, we were at a Flea Market up by Itasca State Park.  There was some very nice looking log furniture.  I have sat in some of this stuff, the chairs with their very straight backs are torture to sit in.  I sat in this one..hey!!  this guy has sat in a log chair or two himself, he came over and said “ Some people just don’t know how to make log chairs.”   Far Guy came over and said..Wow..lets take it home ..so we did. 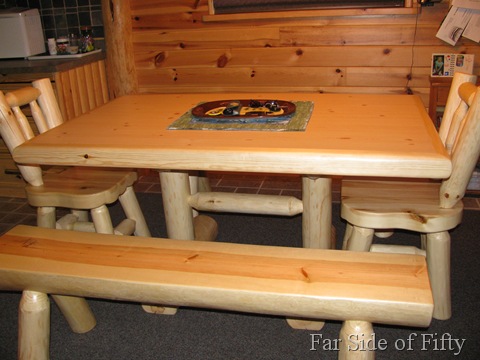 We have lots of room now for people to sit, I had three little boys lined up on the side benches  last weekend and they declared that there was room for a fourth person if they squished together.  Now we can seat eight comfortably. 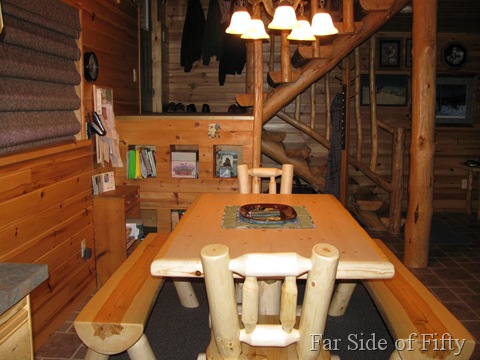 When we built this home, we purposely avoided a formal dining room..been there done that and dusted once a week.  We just wanted a dining area off of the kitchen where we could see the TV in the living room.  We rarely entertain and when we do it is just the neighbors or relatives anyway..not real fancy smancy people that need a real dining room to appreciate Far Guys cooking:)
Posted by Far Side of Fifty at 10:53 AM

Now that set would survive my family. I love how they look! Very nice. Hugs. Tammy

Oh Connie- I love your new table, chairs, and benches! It looks so nice in your house! Can't wait to play card on your new table!

Oh! Connie! Those look just perfect in your lovely home! Good for you! And comfortable also ?!!? Now that is a perfect buy!

What beautiful furniture! I am hoping to get a smaller table because it is mostly us and maybe Candy and Wayne - when others come, we have extra tables we can put out. My dream is a drop-leaf table (in wood) .... Hope springs eternal - if I can't get Norm to make one, maybe I can FIND one.

What? A comfy chair? What world does this guy live in? I've sat in some really uncomfortable wood chairs and would love to feel what a comfortable one feels like. Nice purchase!

I love this set. Good for you two getting exactly what you want and it looks perfect in your pretty home.

Wonderful...they would look GREAT in our log home too (hint hint). hahaaa

You new table chairs and benches look like they were made just for your beautiful home. What a great find.

God bless ya and have a beautiful day!!!

This set looks perfect in that spot! Meant to be. ;)

It looks great in your home. I just can't give up my old miss matched chairs. I just found another old rocking chair for dave to redo. How many chairs does one little old lady need? Dave's has made chairs for my mom and other relatives. Ann

Beautiful furniture and even prettier house! Is your log cabin company just in your area or are they nationwide? My daughter and son-in-law are strongly considering log cabin with they expand their home in a few years. (I am assuming you are happy with your construction.)

I'd take the Far Guy Shopping any day!

Way to go, and comfortable also.

very nice and looks great. Can't wait to have coffee.GW

Oh, what lovely log furniture! And you don't have to repaint your old chairs either now... (Do you?)

ladyfi, Nope no painting for me..I put them all in the garage and will sell them! Out with the old and in with the new! :)
Ann, Old Ladies need lots of chairs..I have too many too! Especially rocking chairs..I cannot resist them:)
Misslynda, We built the house ourselves, it may look like a log home, but it is stick built and we, my husband and I built it ourselves...we did it all except for the cement work:)

It looks like a very welcoming area to sit around in spite of it's not being in a dining room. I like the whole set and I bet you will be able to really enjoy the whole family around the table more often.