Two Highlights and a Non Highlight

Well another week down the tubes..a couple of fun things happened this week.  Far Guy and I went to the “Rez Parade” last Sunday.  We took Chance and parked near the Church and sat in the car until the parade started.   Before anyone calls me racist..the Native Americans call it a Rez  parade themselves. The highlight? 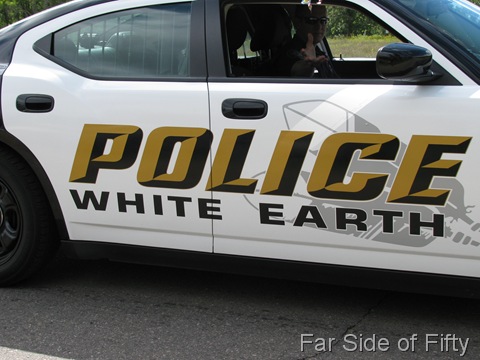 This photo, how many people have a photo of the cops throwing candy at them.

Tuesday we went up to Jen and Andy's, their house is coming along…I am waiting for her to share before and after photos on her blog.  She made the move over from Area Voices to Blogspot..so now she is easier to find. Her blog is called East  Side Professor.   If she were not enamored with the English language and teaching she would have made a great Interior Decorator.  We went along with Noah to his guitar lesson, and then we all went out for supper.   The highlight? 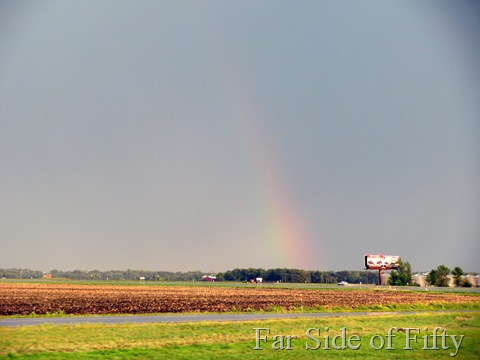 This photo, I had to bump it up a bit in Photoshop..but I finally got one of the photos that is on my bucket list..a Rainbow!!  The blooming Flax field, Lightening and a baby Buffalo still remain on the photo bucket list.  We have had lots of rain this summer, and we have seen a few rainbows..but they either disappear before we get to a safe spot where we can photograph them or are so puny they don’t show up in a photo. ..this one I just took out of the window on our way back from town.

The non highlight this week was a Dental Checkup and Cleaning where it was discovered that I have not just one abscess but two ( sometimes I am just an over achiever)  and I will undergo two root canals on Monday morning..the infections have been treated with four doses of various antibiotics over the past six months. I told the Dentist to just pull them both out, he said he wants to try to save them..especially the one that shows when I smile..I told him that I am a cranky old woman and rarely smile anyway:(

I feel for you ,I hate root canals they seem to come in pairs.
Patsy

Oh don't even talk about teeth. My smile shows some empty spots in the jaw. I hate it. Good luck with the root canals. Beautiful rainbow. Have a nice weekend.

This was my dental cleaning week too! But I came out better, as no other work needed. I'd been wondering if you didn't have an abscess. The root canals should go okey. But doesn't the infection have to be gone first. Next summer I now know where to go for the flax pic. Out to Minot ND area. But its done for this year. Lets make a road trip next summer, about 3 weeks earlier than now.

So, think about that rainbow while you're having the root canal work done! Hope it goes well and you heal up quickly!

I, too, hope your infections are gone first because having them work on the teeth when you have problems is not pleasant. So sorry you have that to look forward to. It sounds like Chance will have to write again if you are under the weather. He always seems very willing and finds everything in life a new adventure - - - even the ordinary play days in back yards!

I found that if you have a setting on your camera for sunsets, it does a great job of bringing out the colors of a rainbow as well. And root canals, who loves them? But having two abscessed teeth cannot be good for your overall health. Bite the bullet and get it over with, I say.

I bet you smile more than you let on! In fact, I bet you laugh everyday :) You always bring a smile to our faces....

I'm missing a tooth that must have cost $5,000 by the time they tried to save it ~ I lost it anyway! Hope it goes smoothly for you Monday.
You are so talented with photography. Love the rainbow.
Can't wait to see your daughter's home. I know the yard is gorgeous.
Try to enjoy the weekend.

You are quite the photographer girl!

I'll sure remember you in prayer Monday morning. I hate that you have to go through this, maybe they'll give you some fun drugs to endure the whole process.

God bless you and have a fabulous weekend!!!

Nice rainbow shot.....that's what Photoshop is for;)

Somewhere over the rainbow...

A beautiful shot that the camera wished to pick up but it didn't. I am so sorry about the teeth. I sense trouble coming up in my mouth but it's a long story. I think my dentist did a bad cap job or a bad tooth.

root canals are painless but boring. they take a long time.
nice pictures! and the rez parade sounds like a lot of fun. it's been years since i've been to white earth.

Hope all goes well on Monday. It will feel better in the end to have them fixed.

Love the rainbow picture. :)
Good luck Monday! I hope you feel much better after those two bad boys are taken care of.
Glad you explained about the "Rez" parade--hehe! ;)