The Bells And A Mountain Lion 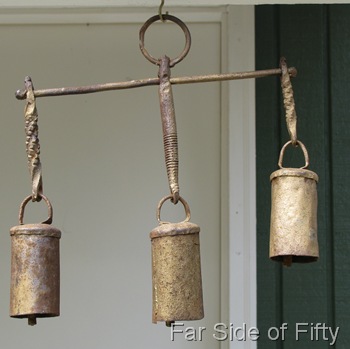 Several people asked to see the bells that I purchased at the Val Chatel  sale.  You remember the ones that Far Guy carried  around for me..and I could tell where he was!  Those guys on TV..the American Pickers had a set just like these one night, they shook them..I nearly flew off the couch..then they put them back down without saying a word about them. Bummer. I think perhaps some kind of animal wore these bells..but I am not sure.  Perhaps my readers care to venture a guess!

I hung these out on the sauna..just incase we are ever lost in a blizzard between the sauna and the house we can ring the bells. Or perhaps we will need them in case of a Mountain Lion Attack..do you suppose these bells ringing would scare one off..or just make him think he had a talented snack?

Last evening a Mountain Lion was sighted in the neighborhood, he or she is about four feet long with a tail that is about two feet long.  Josh, my nephew who was raised in Wyoming and has seen just a few Mountain Lions saw it in his yard.  He called to warn us.  Shortly before the phone rang, Chance came to the dining room window and wanted in “NOW.” Isn’t living in the woods fun. This morning Far Guy is out looking for tracks:)

Yep, we have a lot of them down here. You probably have a good food chain that they can tie into. You may have to wear those bells to the sauna each time to keep the bears, wolves, and mountain lions at bay. Coyotes are our main wild thing that thrives all around the edge of town.

I love those bells Connie. We have a similar bell down below the house at the creek. When John was healthier and had some fellows helping him work in the yard, they would ring that bell if they were ready to eat lunch. That was my cue!
We have coyotes and fox. The mountain lion would really scare me I think!

I just watched a show that was talking about how many wild creatures are invading suburbia. Please be careful!

I have no clue for their original use, but the bells are a piece I would be proud to own.

I dunno about the bells and what they might have been used for -- they are great though. Maybe they were just decorative! I have some cast iron bells that look a lot like yours, which were in a box of stuff I got at an auction, and I have no idea about them either, but I love them. Mine are hanging in the kitchen and are festooned with cobwebs. Once in a while they tinkle a bit if a fan hits them. We are not supposed to have mountain lions in Missouri says conservation, but someone in the area with an "animal cams" got a picture of one. Coyotes are at the top of the food chain here (except for us of course). Cats and small dogs are favorite snacks

The bells are beautiful! Mountain lions haven't made it into our neighborhood. The latest wildlife spotting involved a tiny red squirrel who is terrorizing the big gray ones in our backyard trees, and a tiny chipmunk, small enough to squeeze through a crack into the garage when menaced by the neighbor's cat.

Mountain lions are amazing creatures and very beautiful - - - - but NOT near anyone's house. I, too, would be scared to have one around my pets - - or me! I worry about our cats being taken off by birds of prey.

I've got my birds and squirrels, some deer wander through occasionally, and I've seen skunks and raccoons but they haven't been on my front porch (yes) since I'm on the second floor. That sure doesn't stop the squirrels, though!

Thank you Connie for the warning since I been invaded with wild life I might as well have a mountain lion. Bear on the deck,deer in garden,raccoons on birdfeeder, skunk in back yard,lynx on the pickup,red fox walking in garden,abig black squirrel cutting the end of branch off the oak tree. I need a good dog. GW

Ohhhh a big kitty... we heard about a "cougar" on the other side of the lake -- I imagine it is one and the same big cat! -- I would love to see him and hopefully my camera would be on hand... add that to your list and cross your fingers!

Nice find, yeah I bet you could hear him all over the flea market, hugs

There was a cougar siting here a couple of years ago and a wolf siting this spring but coyotes are our main "wild beast" in these parts. I wonder if they're bells for and ox yoke.

Lions and tigers and bears...Oh my!!! We have big cats here on the Ponderosa. They are soooo not good around the cattle. Maybe we need some of those beautiful bells down here to scare 'em away! Heeehehehehe!

God bless and enjoy your weekend!!!

You get a Mountain Lion, and all I ever see are seagulls, and the occasional raccoon in my kitchen. Sigh, some people get all the fun. LOL.

Chance is one smart dog to ask to be let in, he certainly doesn't want to encounter them.

Did I say that I love those bells!

Wow, I'd love to see a mountain lion ... from the safety of the living room or kitchen.

And what gorgeous bells!

LOVE those bells!! I love any type of bell or windchime especially when the wind is blowing just enough wake them but not so much to clang them. I love the woods and seeing all the creatures. Maybe not a mountain cat, but kitties! :)

Stop by for a chance to win my GIVEAWAY!!
Tazzy

I remember when I was a kid we were camping in Glacier National Park and the park guide told us that if we had an empty pop can to rattle some rocks in as we were walking on the hiking trails we'd be safe from bears, mountain lions, and such. I would think bells would do the trick, too. ;)

Take care! We have strange visitors and I really don't want to meet one face to face.

Yeah, unless your a sheep! The verdict still hangs in the air about our last kill on the farm, bear or cougar? Our sheep go "out back" everyday to the hay fields from their home pasture, they have to pass through some deep dark woods that lay in between. It is a good thing the sheep don't really know what is going on, the stampede for green grass is one thing but I can't imagine what they would be like running past the dark places like a bunch of girls. I think the bells are awesome! How Nordic of you to have them outside of your sauna.