Book Review: News To Me by Laurie Hertzel

News to Me, Adventures of an Accidental Journalist by Laurie Hertzel was an interesting read. I enjoyed reading it, just as I enjoy reading Laurie's blog Three Dog Blog. I wondered how her book would be.

Through Laurie's journey readers learn about journalism and newspapers from the ground up. She starts as a clerk, advances to a librarian who lets her filing pile up, to copy editor to traveling reporter. This book is just one small slice of Laurie's life. Her love for words and truthful human interest stories is showcased in this book. There are spots of humor and spots where I cheered her on..in Leningrad.."YES Laurie be Russian..push those people out of the way..you need your ticket to Finland!!" In News to Me her visa was about to expire, she was in Leningrad at a tourist office, here is the excerpt. " Finally, the window slid open again, and the waiting travelers surged forward. There was no orderly line, just chaos, everyone shoving everyone else, trying to get to the front. The crowd smelled of sweat and cigarettes. I decided that the only way I was going to succeed was to become Russian. I pushed and shoved and elbowed my way to the window. I didn't care who I knocked over. I needed to get out of the country! Panting and disheveled, I suddenly found myself at the window, the clerk staring at me impassively." You go girl!

The book shows us her love for the city of Duluth and Lake Superior. She may even gloss over the horribly cold Minnesota winter weather a tad because of her love for the area. While reading her book I was sad to see her leave Duluth and go to "the cities." It was a bittersweet coming of age.

I was a bit disappointed that the husband became an X at the same time we found out about him. He received far less attention than her dog Toby. I wished she had talked more of the love of her life a Border Collie named Toby, who by the way is pictured on the back cover! But the book isn't a story about an X or about a beloved dog, it is about a young lady finding her way in a predominately male profession of journalism.

Laurie holds her reader at arms length in this book, not too close and not too far away; it is almost a shy tentative hold similar to her first appearance in the newsroom. I would have liked to have read more about the total Laurie, with more about Doug, Toby and her very large family. Perhaps in her next book!

I do recommend this book, it was a good read:) 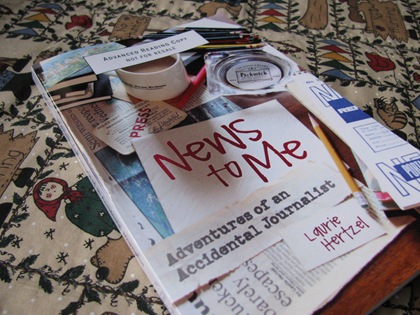 Q and A with Laurie Hertzel

Q What made you write your book?

Newspapers are changing so quickly---the other day, a woman interviewed me, and she didn't take any notes in a notebook, but recorded our interview on her iPhone! I wanted to help preserve a record of the old days, when we used typewriters and scanner paper and the news came in on the news wires, not on computers.
I'd been reading a blog called "The Other Side of Paris," written by a guy who was a long-time journalist in the United Kingdom. On his blog, he told great stories about the old days as a sub-editor (what we in the States call a copy editor) on various newspapers around England, and his blog prompted me to start writing my own stories.
As you know, this book started as a series of blog posts. The book was sort of an accident.

Q. Will you write another book? What will the subject be?

A.  I think I will write another book.  I don’t yet know what it will be, but it will be nonfiction, and it will probably be based in Duluth.  Beyond that, I'm not sure.

Q. I identified with your desire to have a degree in journalism. How hard was it for you to just say to heck with it? You said in the book " I 'm done. I felt equal parts anger and relief." Do you feel less anger and more relief as time has gone by?

A.  That's a great question.  I no longer feel any anger, and I don't really feel relief, either.  Mostly I feel regret.  It was foolish of me to let life sweep me up and take me so far from a formal education.  I learned a lot along the way and I've done OK, but I think a college education helps make a person a better thinker, and I still sometimes look at it as unfinished business.  I'm 53 years old. Maybe I'll still go back some day.

Q. It is a good thing you missed filing your story every night while in Petrozavodsk, at 150 dollars per phone call, you would have been detained goodness knows how long..does that thought scare you today?

A.  I am less intimidated by that first trip than I am by the second.  Good Lord, in 1991 I went to Finland and the Soviet Union all by myself, speaking neither language, unable to communicate in any way. No cell phones, no computers, no email, nothing--just a good heart and a lot of luck.  I do not think I would do such a thing again. I'm a little amazed that I did it at all.

A. The wonderful thing about journalism is this: You are forced to pay attention to things you would never pay attention to otherwise; you're forced to understand things that you do not naturally find interesting.  Once I immerse myself in a topic, I grow to like it.   So there weren't really any stories that I didn't like, once I began the assignment.
I do remember, though, one time working on a story about trees and paper-making and Blandin and the different kinds of paper and how fast various trees grow.... I no longer remember what the focus of the story was, but what I do remember is this:  Going up to the IRRRB and meeting with a scientist who told me all about poplar trees, and forest regeneration, and super-calendared paper, and all kinds of stuff, and writing a lot on a chalkboard, and then, at the end of an hour or two, handing me a big stack of reading materials--lectures, and books, and studies.  And he said, "This was the preliminary interview. Go back to the office and read all of this material, and then we'll do the *real* interview."
And I thanked him and drove back to the office and wrote my story and waited a few days and then mailed him back all of his books.  I'm not sure how much time he thought I had to work on this story, but we were a daily paper and that was all the time I had.

Thanks Laurie for allowing me to review your book..hopefully I will see you in Duluth on September 16, 2010 for the book signing there:)
Posted by Far Side of Fifty at 12:22 AM

Fantastic Post! I can't wait to read this book. Forget my Kindle - this is one I want to hold in my hands and read the old fashioned way. It sounds like a great read.
And, you really did miss your calling. You would have been a terrific journalist Far Side!!

I have to agree with Rae! I will have to read it myself!

beautiful blog..pls visit mine and be a follower.. thanks and God bless..

Thanks for this, Far Side. it was fun "chatting" with you. I get a little long-winded--good thing there is unlimited space in the cyber world.

I could not live with out books.

Great review and interview, I have to read this book now! Thanks girl!

What a fascinating person... bet her book is a good read.

This was a GREAT blog with very interesting information. It sounds like there will be a lot of adventure in the book. I just visited Amazon and read an excerpt from the book. She is a very, very good writer.

Excellent Review! You cover pros and cons and make me want to read this story. I'm always looking for something new to read.

I love the fact that you included and interview with the author!! Awesome! :)