Far Guy and I have been taking a class on Bark Carving.  The bark of a Cottonwood tree is very thick and suitable for carving.   It has been an adventure. 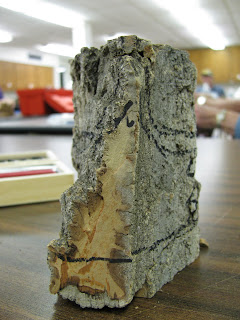 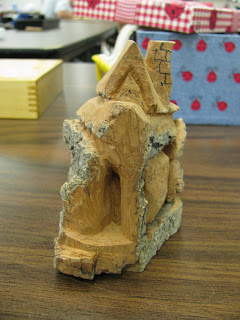 Ah ..finally it looks like a house. This is Cottonwood bark from South Dakota. 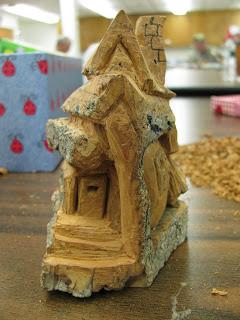 I had a real problem with my roof ( It kept breaking off) so it became a multi level roof. 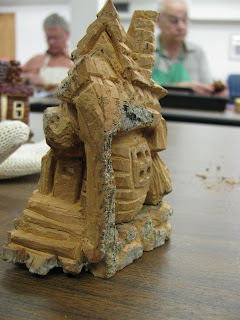 For once I was able to carve a whole project without cutting or stabbing myself with the knife. Success! 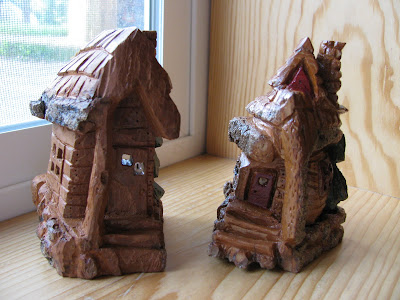 We have taken a few carving classes before,  I almost always get discouraged and my carving ends up unfinished.  I have a duck, a Santa, and a merry go round horse that remain unfinished.. I do much better with carving projects that are individual interpretations instead of trying to make an exact copy.  I try to look at the wood and let it speak to me..most instructors are real put off by such an "individual attitude"..some look at you like you are nuts, anyone can do an exact replica with the right instructor..well except for me..I am always taking too much wood off in the wrong spots, I guess I have always been marching to a different drummer..

I took a photo of all the carvings..each one is different.

Now for a carving story:  I have very little fingerprint left on my index finger on my left hand. Listen up girls, just in case you need to ever identify my body and you aren't sure it is me..look for the non fingerprint. Anyway I was carving one day and sliced it off, yup part of the tip of my finger was laying there on the floor..Far Guy tended to me and got the bleeding stopped..it was really painful. My carving companions rescued my finger tip off of the floor just in case I wanted to have it sewed back on..thoughtful carvers.   Far Guy  wrapped it all up, I had a hard time looking at it.  The next day I just left it covered, finally the second day I decided that I should look at it possibly while laying down so I wouldn't faint...low and behold, I could not get the bandage off.  Far Guy had used gauze and it had grown into my finger..I could not get it to budge..I soaked it for a couple of hours..it still wasn't letting loose.  There was nothing to be done ( well I suppose I could have just kept the bandage in place the rest of my life)  except suck it up while laying on the couch and let Far Guy rip it off...owwie..since then I wear a steel mesh glove on my left hand..just in case..I have found that cuts are less severe with the gloves..however stabbings can still be a problem:)
Posted by Far Side of Fifty at 11:32 AM

Amazing carvings! You guys are so talented.

Wow Connie that looks great. You did a fantastic job. Ouch! Watch out for those stabbings too girl. Don't want ya be minus some fingers or have a hole in your hand.

Gee, Connie, this sure sounds like a fun activity: stabbings and sliced off fingertips. I can't wait! Where do I sign up? :-)

But yeah, your little house is really neat, and individual, too!

YIKES on the finger thing,but wow, such talent! those are awesome!

Golly gee girl, sounds like steel gloves are the answer. I could see the house in the first shot, what great little carvings. I haven't carved anything since college. I did cut the end of my big toe off once (not sculpting, I'm very talented with my toes but not that gifted)...I immediately was taken to the emergency room and the little fella was sewn back on.

Have a greatly blessed day my friend!!!

Carving is something I have never tried and, after doing some finger damage to myself a few times in my life, I think I'll pass. Just reading about your fingertip made my almost torn off one that was flapped back down and sewn on ache a bit in memory fear--hehe! Those houses are so charming, tho! I think I'll stick with clay--and if I ever wanted to try carving, now I know about the steel mesh gloves--hehe! ;)

Ooh my...
Well, I like your little houses, they have so much character, and charm.
My daughter is a woddburner, she makes some of the most beautiful pieces, and is self-taught.
She also tries her hand at wood carving, miniatures usually.
Sorry to hear about your finger, or lack of. I once knew an old farmer, who had but one finger and a thumb on his right hand. He told me he was a wood worker, " I'm not very good at it, am I"

i think the house is cute. now, about the finger, agree you need to wear glove or something to protect. take care, don't carve your finger. Rose

Oh, the house is so cool! I loved doing sculpture. Sorry about the finger -- almost as bad as when I hot glued all my fingertips and they blistered under the glue. Not a happy sight!
Peace,
Muff

that is absolutely beautiful!!!

You are multi-talented! You are always making or doing something that I find more than impressive.

I love your little village. Now with some trees, and on a mirror and fake snow all lit up for the holidays, would be so cute!!!!!!!!!

I love those little houses. Years ago I used a glue gun a lot and I said I would not have finger prints either!

WOW! It's awesome.....and now I want to give a whirl....not the hand whacking though.

The house is darling. I have visions of Hansel and Gretel in my mind now. My son sliced the tip of his finger off once and I got to watch the doc sew it back on. Not my most favorite memory. I'll be you are doubly careful with those knives!

I am very impressed with your talent and your patience. How long does it take to make one of the houses? It is fun to see what other people's interests and hobbies are. That doesn't appeal to me but I admire your creativity.

Youch..... I love the little village - it is northwoodsy whimsy! Very cute and oh don't let me forget you two are so talented! (at least adventurous to try new things!)

I started and gave up carving when I was in Brownies. My first day of camp, I carved towards myself (dumb) and sliced into the skin between my thumb and pointer finger. It bled a lot. I admire your bravery. It's a cute house!

Carving. Really! You are the jack of all trades woman!

Oh for the love of Pete, Ow! Connie, your issues with the instructors sound a bit like me, can't follow a recipe to save my life. Luckily I had been in a real art class once as young person so as a new mom looking to get back into painting and then the cross-eyed look from the "instructor" 'cuz I didn't want to paint geese with blue bows for my first "project" I din't let it impede me. I still don't paint much though, found I really didn't have time for it as I like too many other things.