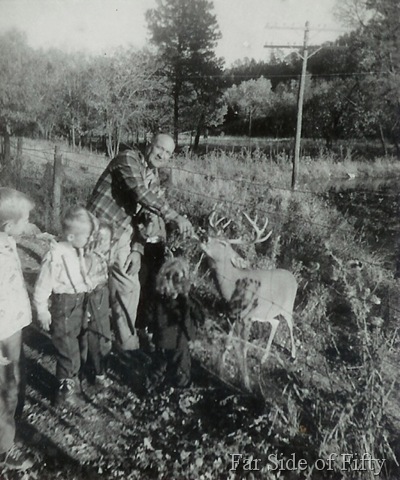 This is an old photo of Far Guys Dad and a group of kids at a game farm/tourist trap, we think it was probably one near Rapid City, SD.

The children are Stevie, Far Guy, Nickie, Jeri in front and Janice is on the other side of her Dad, you can barely see her peeking around her Dad.

Far Guy does not remember this photo being taken.  I asked him what he remembered about those snazzy cowboy boots, he remembers nothing..and concerning the suspenders..he said “No wonder all the kids used to call me ‘Spenders’ in school.”

We have not seen Stevie or Nickie in a couple of years. Jeri died when she was just fifteen years old, while undergoing minor surgery.  Recently I ran onto her obituary it was in that pile of Obits that Far Guys Mother had saved.  She died in Covina, California and is buried at Memorial Park Cemetery in Lincoln, Nebraska.  It must have been a very sad time for the family. Far Guy and I saw Jeri at the State Fair in Lincoln, Nebraska the summer before she died:)

Hey sweetie, I'm not seein' the photo. Is it me??? I don't even get a space or and X where the pic is suppose to be.

I'll check back later, meanwhile have a glorious day! :o)

A wonderful photo ! I have been going through old photos myself of my mum , dad and family. I have to scan them and load them in my computer! I am planing to put a piece of my family history and photos soon in my blog ! I enjoy your blog very much !

Hi Nezzy, I checked it in Google Chrome and Explorer and it was there..I don't know what to tell you:(

I'm Mozilla Firefox but all your other pics are up from older post. Weird...huh?

Love all your blogs, We seem to have alot in common ! only I haven't been able to make more blogs yet! lol. I find I try to cram it all in the blog I have lol This fall I will beable to get more time to do my photography ! so maybe then I may set a blog up just for my photography! you are a insperation to us all !

Connie, the world needs more people like you who cherish the forgotten old pictures. I just went through a bunch of my old ones and am getting the scanner all warmed up. You are an inspiration!

I love these sweet old treasured photos too Connie.

They are wonderful, is that a deer, so close and so cute, thanks for sharing this classic photo, hugs and blessings, Barbara

I know none of these folks but that photo is gorgeous!!! Tazzy

Great picture...Far Guy is the spitting image of his Dad.

Such a sweet picture of all the kids!

love this old black and white. thanks rose