We live just seven miles from the Reservation.  The public is invited every year to the PowWow.  Far Guy and I went over on Saturday evening between rain showers.

No photographs are allowed during the Peace Pipe Prayer Ceremony.  Other than that, you can take photographs. 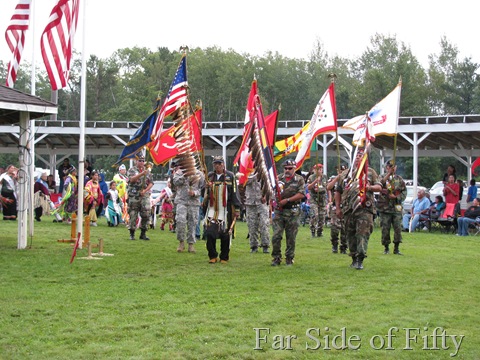 The Flags are honored in the Grand Entry.  They make one circle around the drummers and then the dancers dance another circle around the flag bearers, who are all men who have been or are in the Military.  The entire PowWow area is made up of circles..everything is done in a circle. 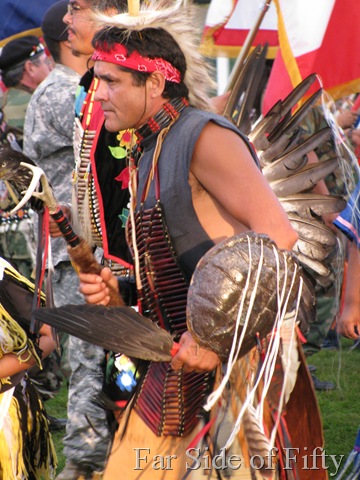 This is the first year I noticed the turtle shield.  I was curious..curiosity should be my middle name.  It seems that there is a story about an Indian Brave who lost a battle, everything was taken from him..even his clothing.  He ran wildly through the woods when all of a sudden he heard his native drum and recognized the singing.  He swam across a river to get there, while he was in the river a snapping turtle attached itself to his arm, he ran screaming into the camp, dancing wildly..since then turtle shields are used during ceremonial dances to remember this great warrior.  In the photo above, the dancer is carrying eagle feathers in his left hand and a deer antler in his right hand..he honors these animal spirits by dancing with them as part of his Regalia. 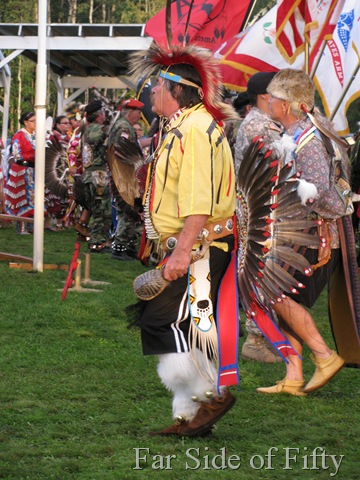 I also saw a turtle rattle, this is attributed to an Anishinabe Tale of an Indian brave who tripped over a turtle and felt bad because the turtle was just soft skin and bone, he brought two shells and placed them on each side of the turtle and said “Here is your protection, you can carry your home with you always.”  The turtle could live on land or in the water, the shell is like Mother Earth a round hump that resembles hills and mountains.  The turtle can also represent a long life. 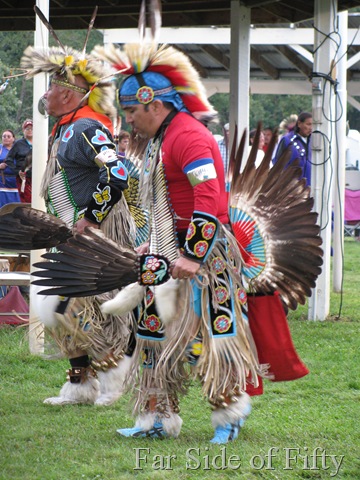 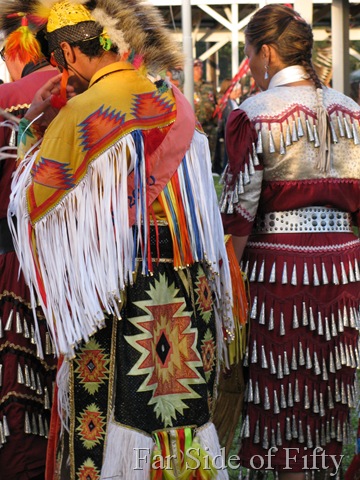 The men dancers seemed to outshine the women this year.  Many of the dancers I recognized from last year, it was a very nice way to spend the evening:)

it has been years since i have been at a powwow. these are great pictures, and such an interesting thing for you to do.

We have a PowWow about an hour away, but I have never attended..now you have me wanting to go...I am sure they have wonderful native dress and dancing there too!

Such beautiful pictures. Last PowWow I ever went to was years ago when gramps was still with us. The colors alone are worth going to one if one has never been. I the history behind each tribe as well. Hugs. Tazzy

I remember a native song/chant from one of the PowWows I attended...it was a military song and honored the warriors who had fought in each of the wars...the chant listed the wars including Korea and Viet Nam...I bought the CD(perhaps it was a tape), but it has been lost over the years...bummer...

Beautiful color of the native dress

Oh such good photos, and I know it was a fun time, so close to home too, nice, I bet you did have a wonderful time, learning about the PowWow and its traditions, hugs and blessings, Barbara

I love PowWows ! I think it was the superman drum that through me off ! I am used to seeing the drums with some sort of spiritual animal on it lol. I have been to lots of PowWows years ago, here in Canada they are all over and quite popular ! I love their crafts, especially their jewerly ! Your photos are great, thanx for sharing, looks like you had a wonderful day there!

I would love to see a PowWow! It looks so beautiful. My husband's grandmother was a Cherokee Native American. He would enjoy the PowWow also.

The stories that went along with the turtle shells were so interesting.
Great pictures.

Have a good day.
Pam

I found alot of history of the PowWow ! Very interesting !

I love powwows. I can't stand still; I find myself marking the rhythm. There used to be at least one a year right in town; I'll have to be on the lookout again; I'd love to take the grandkids.

Aha! Now I know what the elbow had on it: a turtle! Very interesting information, and super pictures, Connie. I kind of thought it was some kind of parade, but I would never have gotten the powwow part, never having been to one.

Great! I used to go to some pow-wows when I visited my Grandmother in Albuquerque but it's been years. I totally enjoyed your beautiful pics and wonderful words describin' 'em.

God bless ya and have a marvelous Monday!!!

I hear the drums calling me. Thank you for allowing me to see it through your eyes.

Beautiful - and such articulate work.

What a fabulous experience! Love the legends of the turtle and those fabulous dresses!

Never been to a pow wow. Really looks fascinating--beautiful costumes! :)