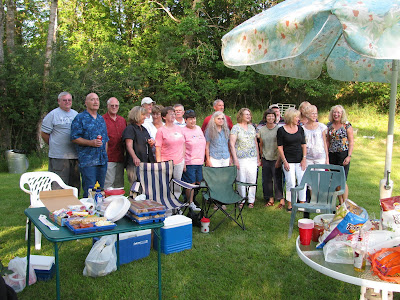 Class of 1968
Last night was the kick off of the All School Reunion.  You may or may not recall that Far Guy has been real active in the planning of this event.  He also planned and executed a All Class 60th Birthday party for his class of 1968.  He was a social butterfly, calling and emailing people.  He made arrangements to pick up a classmate that is in the nursing home, Tom wasn't feeling good enough to attend last night. His nurse called and said he just was not feeling up to it.  Several people are excused.  Vern is at home in a recliner because a few weeks ago he flipped his tractor over on himself, his leg was broken in eight places.  Even the very shy Homecoming Queen came, and she had a good time!  Several gals flew in from Arizona.  There were several hold outs, the Newspaper Publisher might have been too busy, the famous writer might have been writing, the carpenter might have been off building a house, the Golf pro might have been playing golf..some people are just too busy to be bothered..they were later noticed at a local "watering hole". 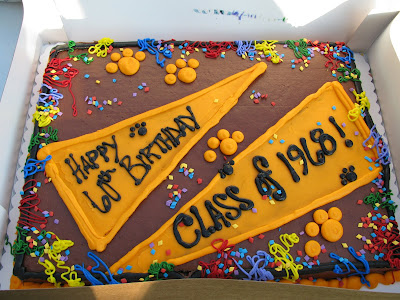 Far Guy even ordered a cake.  I went by his party and took a few photos..then I ran some errands and came home to Chance.

My class ( 1969) had met earlier in the evening, they are a real organized group.  They said "Oh, we will just push a couple of tables together and see who shows up." Three gals were there one of whom was the foreign exchange student from France. They were a wild and crazy bunch so I left after about ten minutes.  One asked if I would be returning, I replied "Not likely" I was never real thrilled about people in my class anyway, I didn't like them 41 years ago and I don't like them any better now.  My class is mostly just a bunch of asshole jerks. It was a total waste of my time and also a waste of perfectly good makeup..yes and I did my hair too..and wore it down..I hardly ever wear it down.  Other than the gal from France who I did have a lovely conversation with..the other two chicks spend way too much time on bar stools if you ask me:(
Posted by Far Side of Fifty at 2:33 PM

Well, the cake for Far Guy's party is great and it looks like he had a pretty good turnout. Glad you could take some pics for his group.

I can only think of 2 people that I care to see from high school. I have never attended a reunion. I would like to hover and see that all the popular cheerleaders are now fat and gray though!!! (just like me)

Glad you had some time with Chance!

That is one great looking cake, and a pretty darn good looking group of people, looking hale and hearty! I just had to laugh at your description of yours, Connie! :-)

My high school (which was torn down this summer, except for the auditorium, which is being re-purposed for the new primary school that's being built on the site) is holding an "All Class" reunion next weekend. I won't be going, not because they're ass-hats (although many of them probably are), but because I'm too much of an introvert. I find being around hordes of people I don't know well exhausting. I'd much rather stay home with a my Old Dog and watch Law and Order reruns.

I skipped my class reunion ('70) this year. Since I attended a private school, most were a bunch of stuck up brats. We attended reunions up until the 25th and then finally came to the conclusion that not much had changed in 25 years and we wouldn't be going back...

Glad Far Guy's was a success!

Interesting thoughts on how it all turned out. I can almost pick out the cast of players in the picture based on your description!

Nice post (PS I skipped my reunion this year - dint have the desire...)

That is pretty neat. I loved the cake!

Yes, I avoided our all school reunion last night. It was held in the gym with no air. We cooled down to 77 degrees last night. I would go to anybodies reunion for Far Guy's cake.

oh dear oh dear... us 69ers are either party girls or wilting violets.

I think that there is a book in here somewhere...

Wow, I thought I was the only one who felt that way about high school. Never went to a reunion, went to a wedding of a friend two years after our twentieth and got bullied by some jack rump there about how I didn't go. Golly, yeah, I should go someplace I don't want to and I'm going to get bullied again, ummm great logic.

What a great lookin' bunch of graduates! Heeehehehe! That cake is amazing!

The last reunion I went to was like a brag fest. They are gettin' another reunion together for the big 40th. It includes a trip to Branson, shows, restaurants and just happens to be the week we planned our Texas trip. Too bad.....:o) Not.

God bless ya and have an incredible day sweeite!!!

Terry's school just did a all school class reunion. I must say he enjoyed it VERY much.

We you get elderly seeing everyone again is a real hoot. No one is trying to out do anyone anymore.

I'm a '68 grad, too--Fridley, Mn. We have had reunions every five years, but I quit after the 30th--only because I moved away. We had great reunion, tho. I have kept in touch with a few people over all these years. Maybe our class was large enough that we didn't know each other way too well--ROFL! ;)