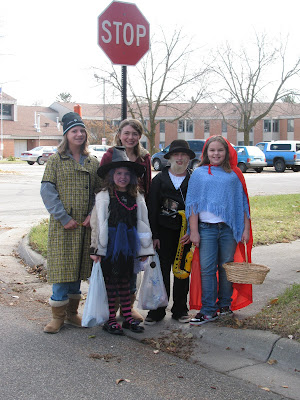 We saw these kids in town on Sunday afternoon. Far Guy and I looked at each other..what in the world were these kids up to? I rolled down my window, Chance immediately came out of the back seat onto my lap. I hollered at the kids " Isn't it a little early to Trick or Treat?" They said "We are out Trick or canning! " I asked them if I could take their photo..they said sure! They were part of a Church group gathering canned goods for the local Food Shelf. A few kids on a Sunday afternoon making a difference.

The grandgirls had the flu last week, they were all home sick. It must have been the seasonal flu. Savannah is really ill now, the ER Doctor said she definitely has H1N1 now and Pneumonia. He said that everyone in their family will get it. So where exactly is the vaccine that we are supposed to be getting? Especially for the children, from what I have read..children will be hit the hardest.

The kid in the balloon. What kind of Idiot parents enlist the help of their children in a publicity stunt. At first I thought that it couldn't possibly be true..now I am not so sure.

How about the sixteen year old girl, Jessica Watson, she is sailing around the world..by herself.. I hear she has a blog. I will check it out.


How times have changed.

As a child I can't remember collecting anything for Halloween other than the normal candy. My girls did Trick or Treat for UNICEF one year.

We had our own Pandemic..Polio..I remember standing in line on a weekend inside the High School Gym, getting a little white pill cup with a sugar cube with some pink stuff on it. Then there was The Asian Flu Pandemic of 1957 or 1958..it landed me in the hospital, I was dehydrated..but I recovered under the care of the scary sisters in the white habits..I believe that hospital stay was my first real time away from home. I was in a large room, with lots of beds and many sick kids..it must have been the Pediatric Ward.

Publicity Stunts, and using your kids to get your own reality show? Nope I am sorry, I have never known anyone that would do this ..but then times are changing..some how the Scarecrows line comes to mind.."If I only had a brain."

At sixteen I wondered how many people we could get in a phone booth.. or how many people we could sneak into the drive in. We were doing group things..not solo things. Sailing around the world alone never even occurred to me. I am sure I would have been carted off "To have my head examined" if I would have ever suggested it. Would I have let my girls go off sailing around the world at sixteen? Probably not, I was nervous when they took the sailboat across the lake. I made sure they had their life jackets on and was ready to take a boat out and rescue them if they overturned. Then again our little sailboat was not a Yacht.

Times are changing..sometimes not for the good either. I do give a Far Side Ovation ( one old lady standing and clapping in the woods in Minnesota) to the children that were collecting canned food for the local food shelf.. their story won't be carried on CNN or the Nightly News or even in the local Newspaper. It appears it will have to be a Far Side Exclusive:)
Posted by Far Side of Fifty at 11:18 AM

Labels: how times have changed, kids making a difference

Yep....times have changed--some for the good and many questionable. I, too, will "clap" for the kids collecting food. Perhaps our news would be, shall I say, newsworthy IF the wheat was separated from the chaff. Seems the chaff is what is winning this days. HH

I hope your grandchild is better by the time you get this comment. This flu is amazing...shutting down schools and office's. You and your hubby take care...you can't afford to get this stuff.

I warned my children....if you are sick stay home, or at lest don't come to the house. It takes us too long to get over stuff.

Go kids. Our youth group would trick or treat for UNICEF each year about a week before Halloween. My girlfriend and I once thought it would be cool to paint our faces black.....with shoe polish! We ended up using everything including Comet to remove the stuff from our pale faces.

I was floored that anyone would take our nation on the ride that the balloon ride took us on. The hearts that poured prayers over the lost child. Big THORN!

Thank you for bringing a bright light to those precious children.

Have a blessed day!!!

I am sorry your grandchildren have been sick and I am hoping Savannah and all of them make a quick recovery.
You are so right, things have changed.
Have a good day.
Pam

I depend on the Far Side Exclusives to keep me in the loop! =)

It is a wonderful thing those children are doing, the ones in costume, that is.

Hope your children are all doing better.

Our Iowa doctors are saying that if you have the flu, you have the H1N1 flu as there is no other strain in the state. My wife and I brought that home with us from Maine, probably at JFK. We didn't go to the doctor as they said don't spread whatever you have. Anyway, it does start like a cold and immediately heads for you lungs. Once we felt good enough not to commit suicide, we coughed for weeks afterwards. Asprin did help. Our vaccine is coming in so slow around here that the clinics shut down by one in the afternoon. No one gets the vaccine over the age of 18 unless you have a life threatening condition. My wife's CHF would qualify her for the shot but she has already had the flu. I am just glad that some antibiotics will help it.

Hooray for the kids making a difference! We are really sorry to hear about the grand girls and Savannah. We are sending prayers their way.

The kid in the balloon? Really stupid and irresponsible parents. I feel sorry for the kid. He probably knew it was wrong but had to do what Daddy told him to.

I had forgotten about the sugar cube! I do remember the "gun" and still have the round scar on my upper arm.

Emma Rose and The Duchess

What a wonderful thing those kids are doing. I wish the mainstream media would carry stories like that rather than the balloon-boy ilk. It's because the parents apparently wanted to start some reality TV show that they got the idea. I do wonder about this turn in American consciousness. Do you think there is anything we can do to turn things around??

Yes, saw in the paper where they were going to do go trick or can. Good idea to do a week ahead. And it just makes me damn mad that our media went so nuts! Who called them I wonder. Feel sorry for those 3 boys, what kind of morals will they end up with as they get older!

My prayers for Savannah and the children to make a quick recovery. Good for the children making a difference collecting the canned goods. It angers me about the balloon incident. I wonder how many legitimate 911 calls had to be ignored while the rescuers were on the wild chase.

Hopefully yur grandbaby is on the road to recovery and I'm sure many people are sending prayers. This item of the family using their child for publicity is an outcry for help of somekind. Hopefully they are punished is a rightous manner. My girls did collect for UNICEF when they were in school but I didnd't know anyone done that anymore. lilly

Those kid's were wonderful, and yes the local news reports probably won't pick it up. But you did, and we got to read about it. Maybe it will encourage someone else to do something kind also.

Pass our get well wishes onto your grands.

Far Side - thanks for visiting today - you commented on my pic -- I have paint shop pro and I need to do some studying -- I think you just like "Jack" in the background :) Thanks for visiting!

God Bless those kids and the food pantry!
The balloon kids parents are mental! Their kids don't know what's true or what's pretend, and to think they've been taught to lie....it's sickening!
I will be praying for your grandgirls.
This H1N1 is scarey.
It seems everyone wants their 15 minutes of fame and if they can't get it, then they do it through their kids. I say we just let kids be kids for crying out loud!

Hope the grandgirls and family don't get to sick - having it in the family could be a hardship. I know where I work they say if your coughing, have a fever don't come in and wait 24 hrs after your fever is gone. I figure if you have lots of kids you may be gone all winter! Heard our school is doing same as usual (kids gone) maybe even above the norm! So it hasn't hit here yet? -

I did food collection as a kid. I remember.

The h1n1 is hot and heavy here, too. I think the shot will come too late.
Weird how it doesn't seem to be effecting the older folk, just the younger ones. Two died last week: a young woman and a child, both with other pre-existing conditions. I always wonder what those are ?

What I've read: the virus can stay alive in your nose for a week after you have no symptoms.
Using salt water gargle and saline nose spray can be a way to fight getting it -- and giving it.

I remember carrying around the Unicef can on Halloween. Some churches are anti-Halloween. Nice to see one that lets kids be kids. I agree, there are a lot changes in the world but a lot of them are not improvements.