A long, long time ago a little boy received a used train set for Christmas. It was a Lionel train and he was about eight years old. It was a complete train set.. an Engine (It had a spot to drop in special tablets to make smoke and everything), a coal tender, a milk can car that rolled the cans off of the car, an oil tanker car, a log car that hauled logs and dumped them, one car had a helicopter that rode on the car..you could wind it up and fly it off of the car and a Caboose that would light up. Not all of these cars survived a small boy and his neighborhood pals..some cars were blown up with firecrackers, one car was lost in an unexpected and huge fire in the basement it seemed that clothespins doused in lighter fluid will start a really good fire. Some cars were sold off for spending money, some were given away. Only two remained. The Engine and the Coal Tender...we carted around a box marked train set..for years. 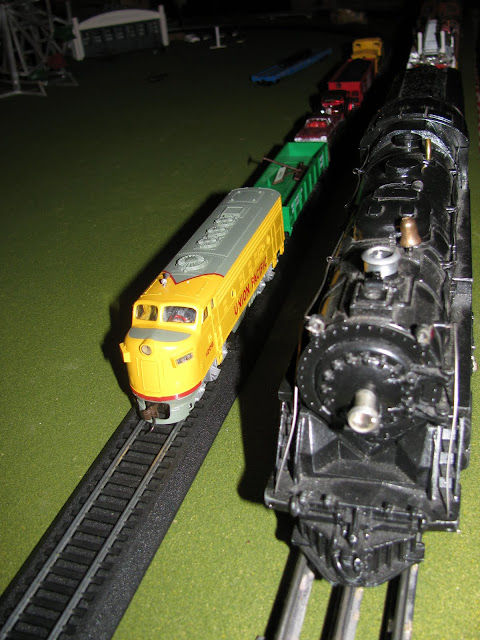 We never really had room to set up a train, and Far Guy was busy with other hobbies. When we lived in North Dakota he finally had room to set it up in the basement. We built a mountain and bridges..our scenery was awesome. I bought him a caboose one year for his birthday..50 bucks for one caboose..but it was in great shape! Then we moved, and it all went back into a box marked Train Set again..we needed a larger box. 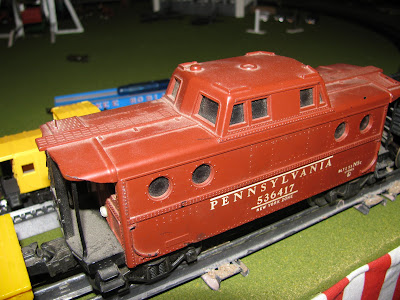 The Train Set stayed in that box until recently, with building the house and building furniture and cabinets..it always was a "someday project". Far Guy was all set to build something upstairs.. remember we don't live upstairs..we live downstairs. I used to have my office up there, I tossed, and sorted for weeks. We hauled out my huge oak desk, there was finally room for Far Guys Trains. He built a table on wheels, it is a four by eight sheet of plywood. He can go up there and play engineer whenever he likes. His train hobby is a work in progress. He has two trains now, his old Lionel which is O scale and a HO model train that I gave him one year for Christmas. Right now they are on the same board..I think that another board should be built on wheels so that it can be stored underneath the original one..it could be wheeled out whenever. The best part of any hobby is shopping for bargains and looking for ideas. Far Guy found an original Lionel Train Station at a garage sale this past summer, amongst a bunch of toys..it was a whole dollar. A nice bargain!! 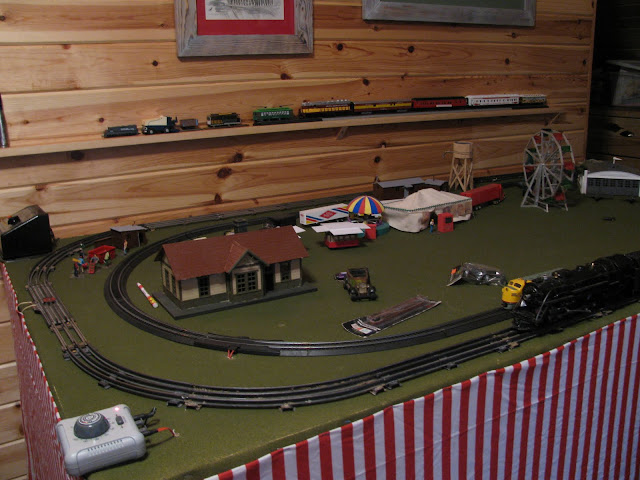 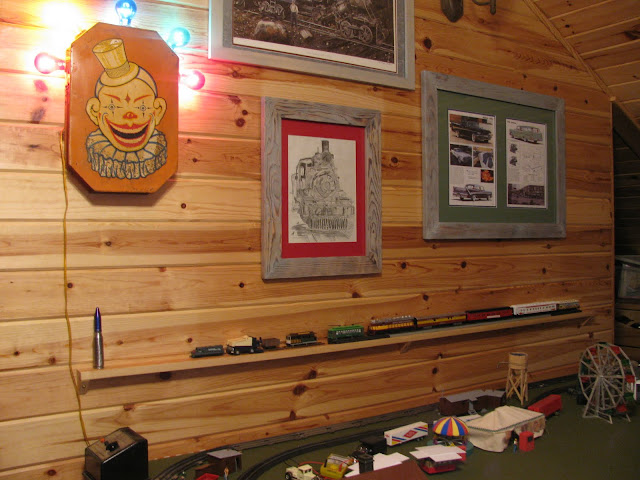 Since Far Guys Train Transformer is very old, he has a special light hooked up for a signal that the train sets power is still on..he has it hooked to an old Tilt-a- Whirl piece of scenery. If it is lit up, then the trains power is still on. I think it is pretty cool and it goes well with some of his other treasures that he enjoys on the wall behind his train set. 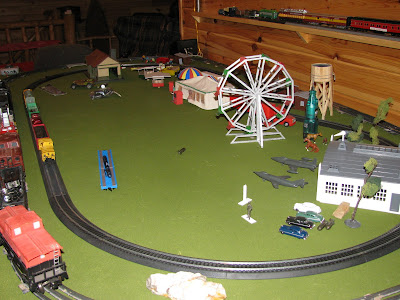 Recently he has been working on some model airplanes..that is an entirely different project. He has a number of hobbies and interests..I think you have to have something to occupy your time during the long winters we have up here.  We have been to lots of different train and hobby shops all over the country, each one is an adventure:)
*** Far Guy just looked at these photos that I took this morning..He said "Oh my, guess I better dust! "
Posted by Far Side of Fifty at 11:48 AM

I don't see any dust! I love all the different pieces of scenery (for lack of a better word). The big striped umbrella is neat - what is under it? I can't quite make it out in the picture. Is it a seating area? A childrens ride? Anyway, great post. What fun!

A great hobby for big boys!

Great hobby. Dad brought home a train set that blew smoke and was made out of cast iron back in the early 50's. I played with it during winter months and later gave it to my male cousin. Sadly it was sold at a yard sale. I do wish I would of hung on to it. {SIGH}

Have a great weekend, I enjoyed looking at the train set.

Hey far guy, I find the dust doesn't show that much. People think the camera is a little out of focus. You have me curious now. My two old trains plus one that belonged to my older brothers are out in the garden shed. I haven't had time to bring them in and see what kind that they are. We have a hardware up town that is more museum that hardware, and he has a track set up already. He is a friend of mine and I want to take them up se if he can get them running. I like the trains that you have. They are so great.

WONDERFUL! ONE DOLLAR ($1.00) as in 100 pennies?
I'd say that was a steal for the Lional Train Station!!! Good Eye Far Guy!!
I've been to one huge Toy Train & Hobby show in Pittsburgh and oh my were my eyes wide open!!!
The prices today are astronomical for the old Lional engines and trains and buildings, etc.
And pretty much the same for most trains and train sets. But taken care of they last a lifetime or more! My husband has some Lional Train items too......in a box......in the basement...on an old train table! One of these days he says, he'll get excited again w/that hobby! Right now it's the PIONEER STEAM ENGINE SOCIETY and pulling his Garden Tractor at local events.
Great posting Connie! FAR GUY<---when you get done dusting.....get a clean cloth and continue on, cause Connie maybe could use the help, but I doubt you'll see any dust in her house, cause she is on top of things!

Trains and train sets are so freaking cool. Tell Far Guy he rocks.

Loved reading about the train sets and the room to display them in. It must be great fun to visit train/hobby stores all over the country. You must meet/talk to some interesting collectors. Thanks for sharing this with us today. It is a great hobby for your cold winters!

I remember learning that train sets are something a lot of guys really enjoy. I am guilty of following not only blogs, but I've been reading some comic strips for years. In "For Better or for Worse," the Dad has train sets and he turned his son onto them. I love the whole idea of being an engineer of Tiny Town!

I loved seeing this. Reminds me of times I spent with my brother as a kid and watching his trains go round and round. Our basement was transformed into a regular depot. I still like seeing train displays. Glad Far Guy is enjoying himself.

Thanks for your visit and info about the photo's.
Love the one of your mother and her brother.I am finding lots of my baby photos with my sister who died in April. My sister gave all of these to my brother when mother died in 2003. The attic was not the place to put the old stickie albums.
Glad you and FarGuy are having so much fun.
Patsy

Emma Rose, that is a model of a childrens carnival ride under that umbrella. The neat thing about it is it is an "O" scale mode and they don't make them anymore, only in "HO" scale. I would sure like to see what treasures are in that garden shed L.D. Where exactly is this "garden shed"?

Little boys grow up, but they never out grow thier train sets.....my husband included. ;D

Connie, my Dad got a toy train for Christmas one year. He was pretty old by then -- probably his 30s (hey, it was old to me at the time, not anymore), and it said "Bobby" on it (the name he was called as a child). Santa brought it because he never did get one growing up 7 of 9 kids. We thought that was pretty nifty. :) It was fun to watch him tinker with it. Now it's in a box in our garage. Hmmm....

My husband gets his train set out every Christmas, it's over sixty years old. He also likes to make model airplanes. Just a couple of boys, for husbands.

This is wondeful hobby, much better than some men's hobbies I know.

Shopping is my favorite part of most hobbies. Those wonderful bargains.

I'm going to have to show this to my hubby --
(his step dad had a beautiful brass train collection, and we always wondered what "mother" did with it when he died)