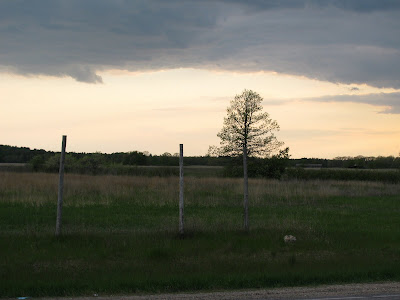 The corner sits empty, the native grasses have taken over..it seems lonely. The tall posts are remnants of a back stop from years ago when we used it as a ball field. Before it was a ball field it was a school yard. I remember the sounds of children playing outside during recess and lunch. I lived just kitty-corner from the old school, I wanted to go to school there, I could walk all by myself. I was a big girl, and I had been there many times. Sometimes we would be invited over for a Christmas Party or a program, sometimes I tried to sneak over there by myself. ..school.. I just knew it was going to be a magical place and I was going to love it. Sadly they built a new school and I had to ride a bus. The old school just sat there. After it was closed..we were forbidden from going there..but on several occasions it was just too tempting. I remember how the building echoed inside because it was empty, and how the floor was littered with broken glass.. it was finally torn down. 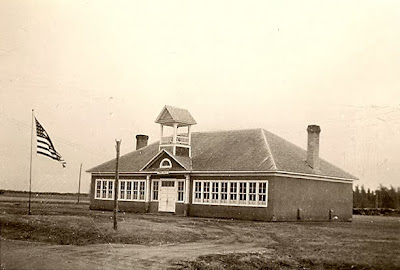 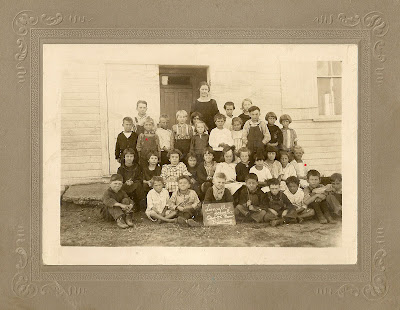 Far Guys Mom ( Evelyn) age 8 and Far Guys Uncle (Willard) age 6 went to school there, they lived just across the road from the school. This photograph was taken in 1923, or 1924. I believe it to be a 1923 photograph of just the Primary Students..that year they had two teachers.. Mary M. Lymburner and Mrs. Smith. I have retouched this copy of the photo..it is still not in the greatest shape..I have marked it with two little red dots just for the purpose of identifying Far Guys Mother and Uncle. Hazel Graham age 6, Morris Stephens age 7, Harry Klarer age 7 and Earl McGrane age 7 could also be in this photo. People who I knew as adults..but are impossible for me to recognize as children. They all appear on the class list in 1923.

Far Guys Mom taught at this school in 1940 before she was married. I am not sure how many years she taught there. I do recall her telling us that her Dad would walk with her on winter mornings and help her start the fire in the stove. She is also listed as teaching there in 1949 she was married by then and she may have..that was the year she was pregnant with Far Guy, he was born in early 1950..so I suppose having a new baby put the cabosh on teaching. I wonder what she did with Far Guys sister Jan? Possibly she spent the day at her Grandma and Grandpas across the road:)
Posted by Far Side of Fifty at 11:41 AM

I wonder if Far Guys mom was even allowed to teach if she pregnant. Times were different - even in 1949. Some teachers were barred from teaching when pregnant. It's too bad that all the old schoolhouses have been torn down. It would be nice if this one could have been restored and used for another purpose.

I agree with Rae, that sure would be a pretty bldg. today. I love the expression of the boy holding the board!

The picture of the school here looks bigger than I remember seeing other pictures. Wish it was still there.

Great pictures of the old school.

I agree that Far Guy's mom probably was not allowed to teach when she was pregnant. One of my former teachers talked about wearing a corset to hide her pregnancy. Ouch! The baby was delivered in the summer and no one was the wiser.

I agree. It would have been nice if it could have been saved. I had to laugh at the facial expressions on the kids. My gosh! Lot's of scowling going on. Maybe they were facing the sun or just would rather have been playing outside :) Guess we will never know! Great post.

I agree I believe you could marry and still teach until you became pregnant and a mother and that became your job. A new teacher was than sent by the state. I love the pic of the kids, what wonderful faces. Interesting and another good read, girl.

This is a great post, enjoyed it very much. Just to let you know your tips about getting the pictures out of the mess worked. I used my scrapbooking tools like you said. There are some I will have to scan that didn't come out and the black on the back will be there for ever. Most I could identity.
Patsy

Patsy, Hey I am so glad my tip worked..way to go on the Identification..that is so important!

Thanks everyone for your comments:)

Thanks Connie - I've never seen pictures of the school but our 4-H club did play ball on the field.

I did a post a few years ago about my husbands step grandmother... she married secretly and visited her husband on weekends. She signed a contract. Only single woman got jobs to teach.

how fortunate that so many people took all those pictures way back then, and that someone saved them!! I love looking into the past, even if it isn't mine:)

What lovely memories. It makes me sad to see the past just vanish and all the buildings be torn down. Bittersweet but you have remarkable photos and beautiful memories.

The old school by our farm (which was once part of some land Terry's grandfather owned) is still standing and houses a church.

It always makes me smile when I drive by thinking of all of Terry's family stories about that old school and the school teachers who boarded in our home.

That was a very large school. It must of covered more than just one precinct. My brothers all went to country school but by the time I started I was bused to Murray. My Aunt and Uncle had a school next to their house and it was never locked, so we spent a lot of time exploring it and I got to see for my first time colored pencils. They were so neat. We of course took nothing just looked everything over as it was left as if school was going to start again.