Last Monday it was a snowy, cold day as we made our way over to Duluth. It is just under a four hour trip from our house. Far Guy had a great time in the Hobby Shop..it was filled to the brim with railroad items..and antiques too..it was very interesting. He did make a few purchases, some stuff for his trains. I will have to tell you more about his trains ..someday! 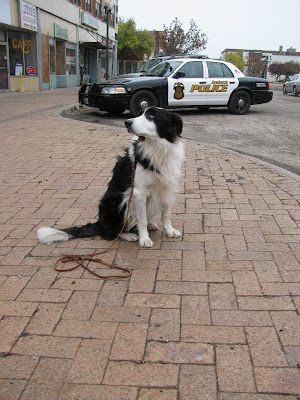 While Chance and I waited outside we had a photo op. This area has a whole bunch of bars..they were doing a brisk business..everyone seemed friendly enough..just a little drunk..it was barely noon.   I love to photograph Chance with Black and White things! 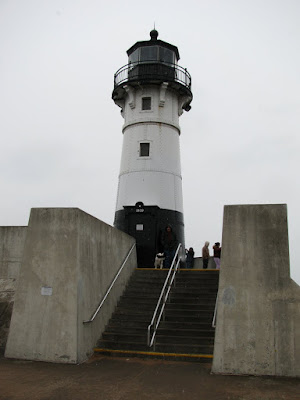 This is the Lighthouse at Canal Park. Since it was fairly cold and snowing there were no crowds of people, there was one other dog, a Weimaraner with a huge florescent orange plastic bat...we could tell he was a city dog..his owner had a huge fuzzy red haired hat. 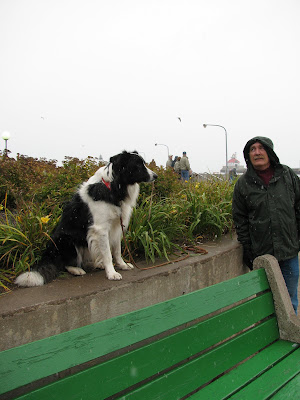 We waited for a ship to come into the canal. Chance hopped up onto the raised flowerbed himself..it made his view more interesting. He just sat there and watched people and the birds. NO, it was not my ship either..this one was the Arthur M Anderson.. 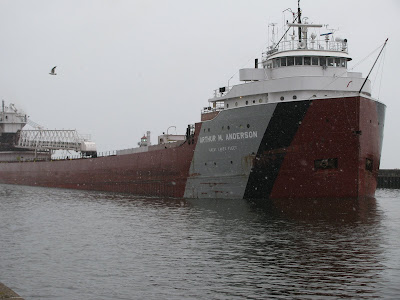 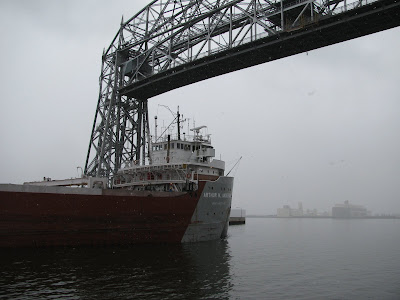 Chance was just fine until the ship blasted it's horn, he was off his perch in a flash and hiding under the bench.. he wanted to go back to the car..NOW.. to heck with the noisy ship. The friendly greeting of the ships horn a long and two shorts didn't mean a hill of beans to Chance.  He didn't think it was at all neighborly or polite. 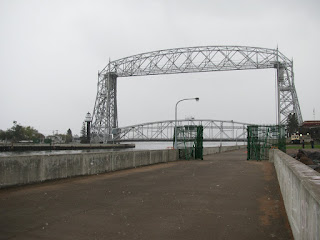 The Aerial Lift Bridge at Canal Park is very interesting to watch. I had forgotten that you can hear the car tires whirring over the bridge's roadway. There was other whirring too, there was a crew weedwacking all the foliage from the day lilies..they were getting their Fall haircut. Irritating noises.  Many cars were going to and from the Island of Park Point.. ( This is where I would live, if I lived in Duluth..it is like being on the Ocean) A long time ago, Far Guy thought he might apply for a job in Duluth..we took the girls and looked over the area..we took them swimming off of Park Point..I was sold, but he decided against applying for a job there. Anyway, back to the bridge..it is on the National Registry of Historic Places and if you don't see anything else in Duluth, you should see this! It lifts to allow ships into the harbor..I have always wondered about the lives of the bridge keepers, they must appreciate going to work everyday to such a beautiful view. 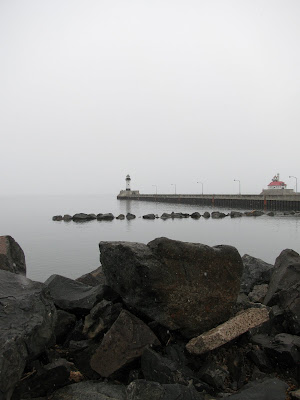 View of Lake Superior.  Yes, I know, the sky and water look the same. 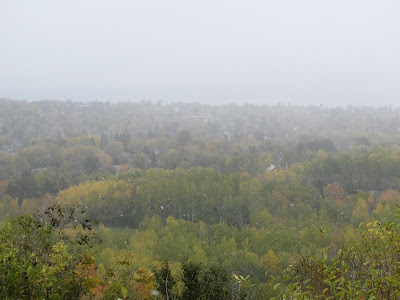 We found our way to Hawk Ridge, with the snow and murky skies not many birds were seen migrating. On a clear day this place must be magnificent..hopefully I will come back again someday. I would love to see some Eagles or Falcons..oh and Hawks! On a clear day thousands of birds can be seen migrating between this ridge and Lake Superior in September and October. The people there were very friendly and bored.. 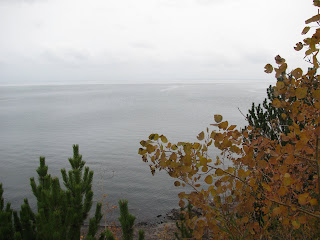 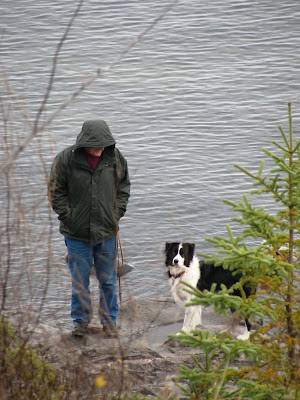 We wound our way back down the hill..looking for The Seven Bridges Road..we never found it..but we did find Lake Superior again. Chance loves water and he found the rocks quite to his liking. It must have seemed like an adventure to him. Far Guy hiked down the steep embankment..I stayed up on top..the crazy dog kept running up and down the hill between us. He got some exercise..it was a long day in the car for him. On the way back home we stopped at a deserted park and played ball for awhile. It was dark when we got home..and it was snowing:)
October: Wet, cold dreary days= 9 Sunny crisp days =2 Snowy cold days = 3 ( Snowy Day 4 in progress)
Posted by Far Side of Fifty at 11:17 AM