I wonder what it was like, if it was day or night, if he was born first or in the middle or was he the very last. Was he hind legs and butt first or did he enter the world like a diver..with his little paws tucked by his head? Did he breathe and squeak right away.. or did his Mom have to rub him half to death with her rough tongue. Was it cold in the barn? At least it was dry, and safe. Those first few weeks of his life, the small children must have handled and played with him every day. He loves children, except when they cry, crying makes him nervous his ears go down and he moves away. That day in the barn when we went just to "look" he walked right up to Far Guy. The rest is history. As for his name, I had the name Chance picked out for a number of years..John Wayne had a dog named Chance in one of his movies. So he was named a long time before we actually got him. We were dog-less for three very miserable years, there is nothing worse than two dog people without one. He ended our dog-less life and our daughters finally got a brother.

December 26, 2004
A Chance Story: We got him on December 26, 2004, he was just eight weeks old. That next spring, he became a greenhouse dog, he would go back and forth between the two greenhouses. One day, I thought he was with Far Guy, and Far Guy thought he was with me..we started hollering..I blew my whistle ( Whistle means Come=Cookies). He was not showing up.. my heart was in my stomach..where could he be? Was he asleep someplace? Did we lock him in somewhere? He was nowhere to be found. Then I saw him at the edge of the driveway, all stretched out in a peculiar position. Far Guy said "OH SHIT, DID HE GET HIT BY A CAR? " Maybe, but he was moving. Far Guy ran, I kinda ran, I am not a good runner. Chance was stuck. He was definitely alive ..but stuck..trapped in a tomato cage.. one of those wire ones with a tapered end..he went in just fine..but couldn't escape out the other end..he was too scared to back out. He was in a real pickle. He had managed to inch the cage out of the woods little by little..trying to get to us. Far Guy and I were his heroes, rescuing him from his unexpected confinement in a very evil tomato cage. Needless to say, we collected all the evil things and put them away in the grain bin. In retrospect it was pretty funny, at the time ..it was not funny at all. He is not a very vocal dog, he never barks unless someone or something strange comes in the yard, he is not a yappy barker like the Shelties were. He is quiet, sometimes too quiet..although he does whine and cry and carry on like he has just lost his best friend when Far Guy leaves without him. It is so pathetic, and might even make me shed a tear or two..if it weren't so over dramatic. He should be in the movies!

Chance in Duluth October 12, 2009
Chance is a pretty lucky dog, we have the time to spend with him, to throw his ball for him and to take him on little adventures. We take him almost everywhere with us. He wakes up every morning, raring to go..excited just to be awake and more than happy to wake us up so the adventures can begin. 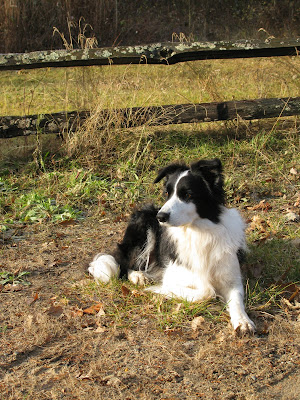 Chance October 24, 2009
Today Chance is Five Years Old! We will probably take him into town to celebrate today..possibly to his favorite place.. Burger King for some French Fries! He doesn't get them very often, and when he does we make them last for about three days! :)
Posted by Far Side of Fifty at 10:13 AM

Happy Birthday Chance from all the gang at Nalley Valley! Enjoy those fries!

A great big huge Birthday Wish to Chance. He is a beautiful, and gorgeous dog.

He seems perfectly suited to life with the two of you. And you with him.

HAPPY BIRTHDAY, dear Chance. Was interested to hear how you got your name. I really loved your baby picture and thanks for sending that.

He is still terminally cute, but that baby picture, well... it's SO CUTE. He may be a lucky dog, but you two are lucky to have Chance also. All around a truly moving love story.

They are such a great breed. Chance is such a happy guy, and you guys really take good care of him. I really enjoy hearing about him.

Happy Birthday Chance! I hope it's a great day. Chance is a good looking boy now but, wow, he was a gorgeous baby.

Happy, happy birthday Chance. Hope his day was filled with lots of balls to chase , good burgers and fries. Loved the Chance story.

Have a great week!!!

Happy Birthday Chance, you've good people lookin' out for ya.

Happy Birthday Chance! You keep takin' good care of your pack, you here.

Happy Birthday, Chance! I glad they did not name you Dog.

Oh Chance, I hope you had a truly wonderful birthday today! French fries are yummy, better than birthday cake if you ask me. I hope you learned to stay away from any kind of wire cage -they can be so dangerous!
Kisses,
Emma Rose

What a gorgeous guy Chance is. Hope you had a great birthday!

Happy belated Birthday to Chance! He is a beautiful dog.

Nothing beats our beloved pets!

Sounds like "a dog's life" has a whole different meaning, at your house! LOL

Lucky pup. I am supposed to be getting a Bearded Collie some time after the first of the year, I think. The female was just bred a short time go. I am looking forward to it. It has just been long enough since we had a pup I have about forgotten all the chewed up things and messes on the floor! LOL

Happy Birthday Chance. You were a really cute puppy and you and Far Guy make a handsome pair out there on the bridge.

What a wonderful story! I have been wishing and wishing for a dog recently, but we work all day (long days) and a dog would be too sad, left alone all day. He is a great dog!!

He is so handsome!! Give him a Happy Birthday pet from me and a hug too. He looks like such a nice, happy boy!

Happy late birthday, Chance!!! Hope the day was filled with love and LOTS of fries!

this needs to be in chicken soup for the soul or something.

I'm surprised he doesn't like the hamburger. I can't get my dog to eat any fast food..although he loves eating the cat's food (so they can't have it) and he loves GOING, but he is terrified of the fast food place for some reason.