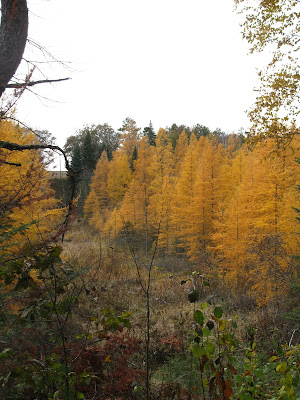 I like trees because they seem more resigned to the way they have to live than other things do. ~Willa Cather, 1913

The Tamarack or Larch..it's scientific name is Larix laricina. It is a Northern, cold climate tree. It is a deciduous evergreen..confusing..all it means is that it loses it's needles every fall..looks deader than a doornail all winter and in the spring..the needles come back again..first as a soft green haze..becoming less hazy with every spring day. Nothing spectacular happens with this tree until Autumn. In Minnesota when every other tree has done it's thing, all the leaves have colored up and fallen to the ground, or turned an ugly brown color while clinging to it's branches for dear life. It is time for the Tamarack. 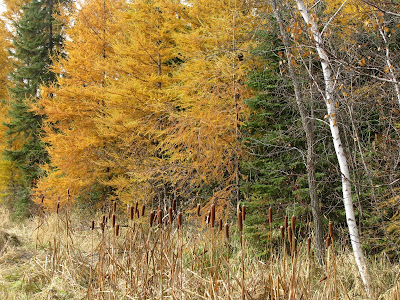 The soft needles turn a golden yellow, it is like a million little sunbeams are caught up in these trees.

I do believe that the Tamaracks are anti social, they want the stage all to themselves. They want me to ooh and ahhh.. I have to admit they put on one heck of a show. 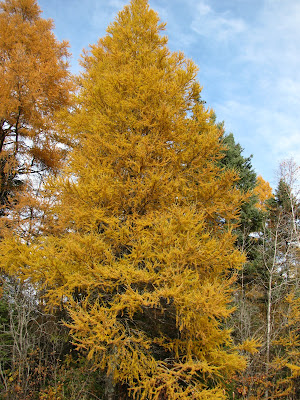 Tamarack usually grows in swamps or low lying areas, however I believe there are a few used as ornamental trees in Fargo, ND. If you can get past the Charlie Brown winter time look. Needless to say they are not grown for Christmas Trees, perhaps it is their silent protest against that barbaric practice. Wood from the Tamarack is used to make beautiful floors. It can be used for lumber. It can also be used for firewood, although you best not use it in one of those decorative fireplaces where the pretty little birch bark logs lie in repose. It burns way too warm.. and will probably warp your fireplace. We have used it in our outdoor wood stove, it is built to withstand the higher temperatures. 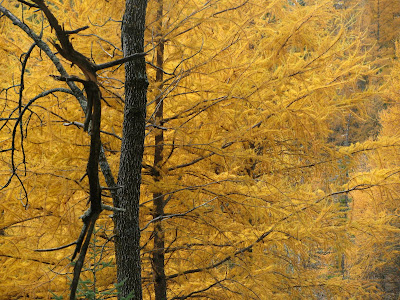 Tamaracks aglow..just one more sign that Fall is well underway and Winter is not far behind:)
Posted by Far Side of Fifty at 3:15 PM

It really crackles in the fire place too

Thanks for sharing these beautiful majestic trees. I am not familiar with them. Probably not native to the Ozarks. I can just imagine what they look like glistening in the sunlight.

Have a super weekend enjoying the beauty that surrounds you!!!

They were pretty on our ride today too. Oh - everything works good on the sewing machine.

They really put on a show. Your pictures are really pretty.

What lovely things they are.

Haven't been out and about to see them....but Hubby said last week you should get out and take some pictures....

They are somewhat majestic in their own way!

I have never seen a tree like that, it is amazingly beautiful.

Your pictures remind me of the time my husband (ex-husband) and some friends (they were much older and should have known better) went to the mountains to cut fire wood. You know what happen next right? We cut down a dead pine tree. we were so dumb we didn't even figure out that it wasn't a dead tree by how heavy the logs were. We stopped in a mountain town to say hi to another friend and when he saw what we had cut down he was shocked. Anyway we didn't burn those logs for a couple years.

They are pretty wonderful. What a amazing golden color.

We had a Japanese Larch at the nursery, one of the most beautiful trees ever. When it turned golden, and then needles fell, it was stunning.

We have tons of Tamaracks here in the U.P. and I love them too...their branches are so soft...and yes the yellow practically glows! I love their contrast when they grow right next to the green pines.

Everywhere I look, there are yellow trees. Tis the season. Don't have Tamaracks tho.

I had never heard of a deciduous evergreen, thinking that they were two different kinds of trees. I think the name "larch" is fetching. Kind of like "lurch" and "arch" put together. Thanks, Connie, for the great pictures and description. And I feel sorry for Jewel! I can imagine how she felt...

I love they way they are ablaze with light!

I saw that tree in a bunch of photos from Montana and now I know what they are. I have never known a Larch tree, other than an old dormitory at ISU was named that. Larch Hall. I learned something today and the tree is wonderful.

What a beautiful sight. I never knew there was a tree like this. We have a lot of evergreens, but they are just plain old evergreens!