Big Guy With An AXE 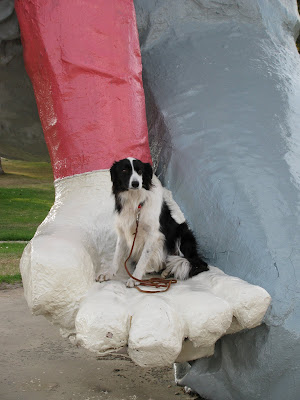 Where in the world is Chance now? I had him sit inside Paul Bunyans hand over at Akeley, Minnesota. This statue of Paul is just one of many that you will find in Minnesota. The legend of Paul and Babe using Minnesota for a playground, their footprints forming the depressions that filled with water and became the 10,000 lakes was always a favorite of mine. 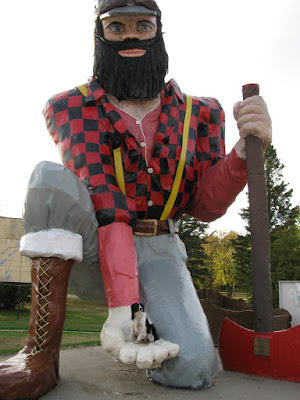 Chance was not very happy, but he sat for a photo anyway. 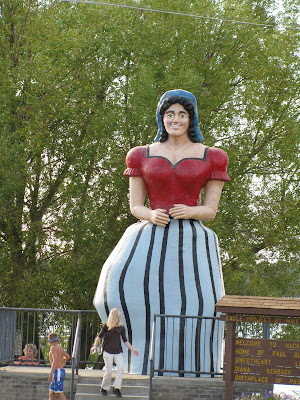 When we were over at Hackensack, Minnesota I took a photo of Paul Bunyans Sweetheart, Lucette Diana Kensack. There is some argument between towns, Brainerd thinks his wife's name was Pauline. Hackensack says "NO" they have proof as they have the marriage license. Poor Lucette, a few years back she lost her head in a storm..apparently the good citizens of Hackensack felt sorry for her and did a head reattachment. 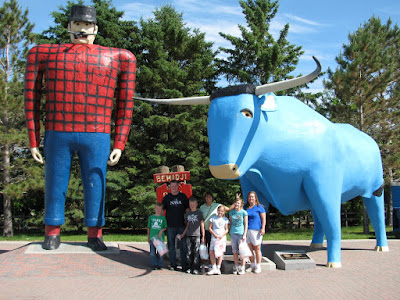 July 03, 2009 Bemidji, Minnesota..most of our family.
Up in Bemidji you will find Paul and Babe the Blue Ox. He is stuck in time at the waterfront. I wonder if school children are still exposed to "Tall Tales"? I wondered what do my Grandchildren know about Paul Bunyan? So I called them and spoke to them individually..
The Question? What do you know about Paul Bunyan?
Savannah Age 13, He is very tall and has an ox that is blue. That ox was frozen that is why he is blue. They made the Grand Canyon and all the lakes in Minnesota.
Madison Age 11, He is a logger that carries an axe, the lakes were all formed out of his footprints. He has a blue ox named Babe that carries his luggage, and he can eat 10,000 pancakes for breakfast.
Paige Age 10, The Telephone Service or the big guy? (Their phone company is called Paul Bunyan) The big guy Paige... OK.. He is a lumberjack and has an axe. Babe is his buddy..that's about all I know.
Noah Age 10, I know hardly anything, he has never really come up. He has an ox called Babe, a blue ox, and babe has a girlfriend and it is a cow.
Adam Age 8, He is a log chopper, he has a blue ox named Babe. Babe used to be white but he laid in the blue snow for five years and then turned blue.
I loved their answers, all individual, all different. Madison loves pancakes herself so that would be a bit of information that she would remember. She said "Thanks Grandma, for letting us be your suspects..I mean subjects. " Then I could hear Paige in the background hollering "What a suck up." While I was talking to Adam, I had a very hard time trying not to giggle.. he is such a cute storyteller. Thanks kids..you all did great! :)
Posted by Far Side of Fifty at 10:10 AM

Oh how fun Connie! I love your post today!

Loved the Grandkids answers! I used to ride with Hubby every now and then into Minnesota before we closed the trucking company. I always laughed at this sight.

Have a great Monday!!!

What a good blog today! Love it - And don't kids do great!

I love the grandkids version. They sound adorable and clever. They must take after grandma. Poor Lucette losing her head. Looks like they did a pretty fair transplant. I enlarged the photo of Chance and had to laugh. He is definitely giving you a look and I can only imagine what he was thinking. Good thing he doesn't talk or else you might have gotten an earful.

Thanks for the nice comments on my blog post. I really appreciate them.

I've got pictures of my children when they were small standing next to Paul Bunyon at Enchanted Forest. Almost had forgotten how large the statue is. Thanks for jogging my memory of times gone bye. lilly

Loved the post and the pictures! It's good to know that kids still know who he is/was. And poor Chance! He's being a real trooper but you can tell he's not too happy about it :)

I love your post today. I was born near Bemidji a lot of years ago. And there is a family photo of all of us children taken over 50 years ago in front of Paul and Babe. Funny, Paul hasn't aged near as much as I have.

Sounds like the schools (or someone) are still passing on the folklore, thank goodness!

You are a really cool Grandma!

There is no way I could see mine doing such fun things.

Great blog today! Chance you did great! And the grandkids - wonderful- You made writing easy for grandma!

The kids are wonderful. I didn't know about the girlfriend. I did know about the pancakes, my favorite food. Chance was certain he was going to get into trouble but he obeyed. A fun blog.

Connie~ What a novel idea to ask your grandkids what they know about Paul Bunyan!
Years ago on a camping vacation we visited the same statue of Paul Bunyan and Blue! I must have that pic somewhere!!

"CHANCE" is a mightly wonder dog!

What cute answers. Love the one where the ox is blue because it's cold!


And Chance is just adorable!

Hello there!! What great pictures and such a HUGE Paul Bunyan!! I loved this post! Oh my God...to see your wonderful Chance in Paul's hand was so precious! How the heck did you get him to sit for that?? Good boy Chancie...good boy!! Loved the interview with the grandkids too...what a precious blog...nice job Connie!