On this date in 1947, my Mothers older brother was killed coming home from work. He went off of the road and ended up in the bottom of Dead Horse Hill. A huge hill, with a creek at the bottom. As a kid I always thought it was pretty spooky, especially after I heard what happened there. 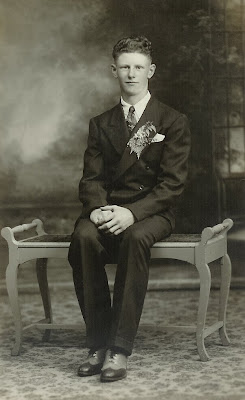 Alfred, on his confirmation day.

My Mother says "Alfred was killed in a car accident on Dead Horse Hill on October 21, 1947. We were all very sad, especially Aldon who was just three years old. Aldon took his little wagon to meet Alfred everyday after he came home from work. Alfred would put his lunch bucket into the wagon and Aldon would open the bucket to see what his brother had saved for him that day. Aldon cried everyday for a long time. Ma and Dad were extremely distraught until one day when they came home from town. They both saw a beautiful gate at the bottom of Dead Horse Hill..the gates opened and they drove through. After that their grief was different. " 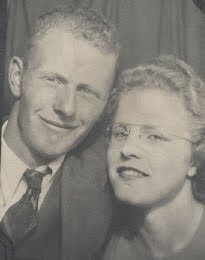 I do believe my Grandparents in their grief saw something. Beautiful gates opening..possibly...maybe. My Grandfather used to ask me "Have you ever heard the Angles sing?" I have not. My Grandfather has...he said " The day the Alfred died, I heard the Angels singing, I have never heard such a beautiful sound..I knew that something special happened. "

My maternal grandfather was not some religious zealot..he was a normal Grandpa, who believed in God and heaven. He believed he heard the Angels singing..who am I to say he didn't. If he got some comfort from believing he heard them then so be it.

From October 21, 1947 to February 21,1948 is just four short months. ..on that day my Grandma gave birth to a tiny, tiny baby boy named James.. he was born and died the same day. My Mom said "He was so tiny he fit in a shoebox, he was beautiful and perfect..just too little."

I believe he heard angels singing, and I can see why your grandfather found comfort in that. God gives us signs all the time to let us know things will be alright.

I love that picture of Alfred and your mom!

Apparently my great grandfather "heard" the singing once, too. Everyone who knew him believed him.

What a tough story. Tragedy hits today a lot but back then, it seemed more frequent with little medical understanding. It is funny how some one tells you about something when your a kid and it sticks. On a very windy day when I was a kid, a boy was killed by a gasoline barrel that fell off of it's stilts. I went outside and looked at our gasoline barrel and I was very bothered by that story. I can still see the wind blowing wildly through the Chinese elms next to our barrel and I thought how sad the parents must be and I even thought about what the boy must have felt. It was a freak accident.
Thanks for sharing you story.

I believe your Grandfather really did hear the angels singing. Stranger things have happened! It must be an amazing sound.

That was such a sad story, but so inspiring. You have a great talent for writing and telling such stories. I am sure that your grandfather truly did hear angels. I believe they walk among us.

It always seems to me that families from years ago grew stronger from all the tragedies that occurred. They took things in stride and handled their grief better. People just whine and cry about the simplest things anymore. We could learn a lot from your grandparents. They sound like they were wonderful people.

I believe in guardian angels. I believe that they are standing by outside of the time-space continuum and know that there are things they can do that will help us with the heavy load that being a finite creature brings. Good story, Connie.

Isn't God amazing to give us signs that remind us everything is ok? Thank you for sharing this and the wonderful photos.

Have heard of many signs from heaven, but to hear Angels singing must have really been awesome. Yes, you are a good writer.

I'm so glad you share the tough as well as the happy times. Thank you, as always.

I love family stories. I believe they saw the gates, and that your grandpa heard the angels.

I believe your grandfather passed on the ability to say "just the right thing" from his heart to your mother -- and if he heard angels I betcha he heard angels! A very sad story but told very well!

So very sad to hear about Alfred and James.

I love the symbolism of the gates opening and the angels singing - such beautiful comfort.

I firmly believe he heard the angels sing. As my precious FIN was in the final stages of illness the introduced my daughter to two of 'his' angels who stayed by his side as he walked this journey. We walked in one time and he was obviously directing a choir or something above him. We questioned and he said, " it's the angel band." I believe he was given a glimpse of the supernatural to help him walk the transition into death. Call me nuts, but it gave the whole family comfort because all he wanted to do is go home.

Ya'll have the best day filled with the Lords blessings!!!

When my beloved Dixie was dying from cancer, she said she could see the other world, it was like walking into a prisim it was so beautiful. When my grandmother was dying at 93 years of age, she kept telling us the angels were right there and she was going to be with them just as soon as they said it was time.

I believe. I really do.

Thank you for this lovely story. As sad is it was, the gift of life is still there.