Yesterday, late in the afternoon we went on an adventure. Far Guy took me for a ride into "The Big Hill Country". I made the mistake of asking him where he thought the biggest hills were in our area, he used to deer hunt back in the big hills, and he knew where there used to be a pretty little lake. I have been north and south of the big hills but never through them. We took the pickup it has more clearance than the car, we might need it in the hills. ( For those of you familar with the area, we were south of Hwy #34, we went into the hills heading east off of the Pickerel Lake Road.)
I didn't pack a snack or anything to drink, and we didn't tell anyone where we were going.. I should have left a note on the table, next time I will. When I got into the truck I noticed a busted belt on my seat, I asked what does this belong too? Far Guy replied, "'To my truck, I think it is the air conditioning belt." You think? What if it is something more important? "Then we won't make it very far." Alrighty then. 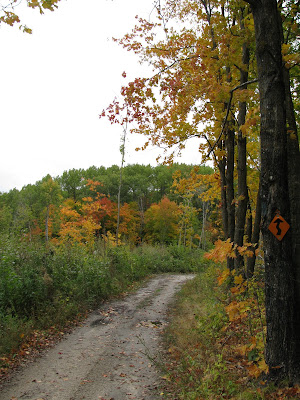 We went further and further into the woods, the road got very narrow. I think we might have been on a snowmobile/four wheeler trail. 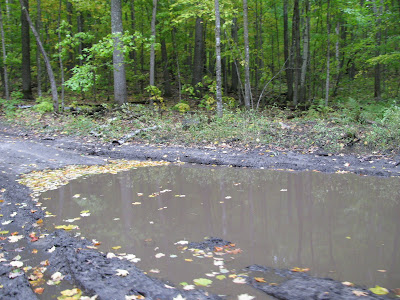 There were big mud holes. Many of them....we went up one hill and down the other side into a mud hole. Far Guy says "I don't remember the lake being this far back in here." 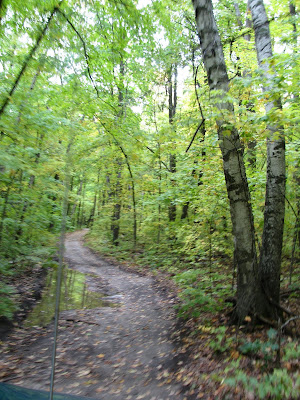 I said "I have no idea, but the road kinda resembles a footpath." Far Guy says "Oh well, we know where we are at and we are only two miles off the main road." There were huge rocks and roots in the road, it was becoming treacherous. I was getting nervous. We nearly got stuck in one mud hole, it was really deep. The road is getting rougher, I had unbuckled my seat belt so I could hang out the window and take some photographs. We are bouncing around so much, my head hits the roof of the truck..I should have worn a helmet. I started taking photographs..Far Guy said "What in the world are you taking photographs of? " I said, "I am establishing a record, when they find our bodies, they can look at the photographs, they will tell the story." 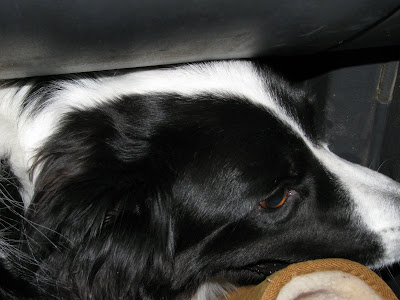 He finally said " I think we should turn around and go back." Really..ya think?? I helped to find a place without stumps, logs or rocks to turn around..not easy. Chance must have been listening, he is pretty smart. When we got turned around, we both breathed a sigh of relief..and Chance came out of the back seat, and into my lap, and then proceeded to wiggle himself down in between my legs and the dash, he wanted to hide on the floor where it was safe. We both started to giggle and couldn't stop..laughter is sometimes a great stress reliever. 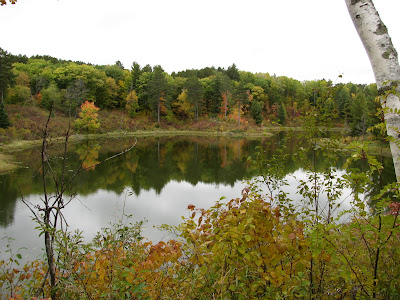 We made it back to the main trail ..what an adventure! We did come across a lake eventually, a number of them. Then we came across some private lakes and some farms..a very pretty area. We were on a road that we knew existed, just one we had never explored before. We made it back home well before dark. The sun might actually shine today..so perhaps we will have another adventure to report on tomorrow:)
Posted by Far Side of Fifty at 9:59 AM

Your story really made me smile. My husband and I often take these kind of adventures, sometimes we find wonderful places, sometimes we get lost, but we always have fun!
Sunny :)

Connie, all I can say is that it's a miracle you didn't get stuck! Great story, wonderful views, and I'm glad you're safe and sound. I fell while hiking on slippery mud yesterday and hit my shin pretty bad. I'm sitting here doing RICE, for the weekend I guess: rest, ice, compression, elevation. (sigh)

I loved the line, "I am establishing a record, when they find our bodies, they can look at the photographs, they will tell the story." I can SO relate to your experience.

Thanks for the giggle this morning.

We have been there, done that! What a hoot!

That was a great off road adventure. A bit scary though. I would have been afraid too. Afraid of being lost forever. Guess I am not much of the adventure type. Glad you are back safe and sound.

Those are amazing shots, what a adventure you had. I am so envious.

I wish, I can only wish that we had such beautiful scenery around here. See that is why we want to move upcountry so badly. I bet they have lakes up there. LOL.

And yes, maybe next time, take some food and water, and leave a note. We would be patiently waiting around here for a new blog post wondering what had happened to you guys.

Oh my goodness! Definitely leave a note and take rations next time. Glad you are home safe and sound.

Little adventures are grand! Especially when with somebody special! I had a drive today -- allowed extra time for some picture taking and found some beautiful fall stuff right here in our backyard! Have a great weekend and watch out for snowflakes!

For some reason, I read "next to our will", instead of "next time I will". That got me rolling. I loved the tale of your adventure.
Beautiful pictures.

Funny!
Great pictures..it reminds me a LOT of where I live and the back woods here. (the upper peninsula of Michigan).

I love an adventure! Put one of those motorcycles you love so much in the back and you'll always have an alternate way home.

What an adventure! Love that last picture of the lake!

Oh My God what a cute story Connie! I love the way you tell it too. I was wondering right to the end... 1. If Chance was with you. 2. If you would get stuck there and need to be rescued. 3. If you were going to find the place? Those roads look a lot like our camp roads on the lake here in town. They can be pretty bumpy and narrow as heck...with no place to turn around...branches slapping the vehicle all along the way. Great story and I am glad you were all safe. You and Far Guy are quite the adventurers!! I love that! Sounds like you are both cut from the same cloth and were meant to be together.:)

Great story! The roads and area look a bit like where I grew up, but nothing like anything around where I live now. I miss that stuff!! Thanks for sharing!