On Saturday a bunch of my Mom's nieces and nephews hosted a reunion on Lake Seven by Vergas Minnesota. 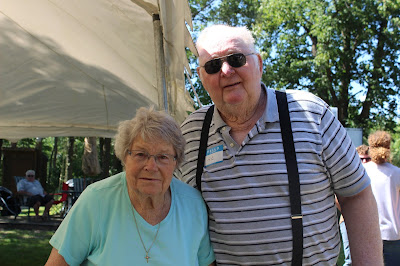 My Mom and one of her brothers (her other brother lives in Nebraska and did not attend)  They are the remnant of 12 brothers and sisters.   My Mom is 2nd born and Uncle Al pictured was born 9th and Uncle Kenny was born 12th.

It was a good day with way too much food...they are a bunch of good cooks! 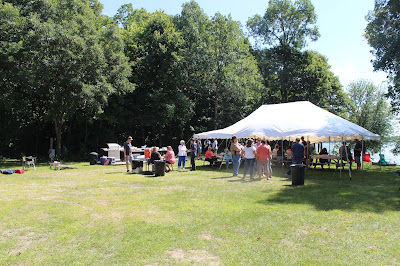 Uncle Al shared that when I was born he was seven years old.  My Grandmother birthed twins two months after I was born so there were three babies in the house that winter (My Dad was in Korea).  Grandma or my Mom would holler for Al to come and rock babies to sleep.  He said most often he was at the woodpile with his brother Butch splitting wood when the call rang out from the house.  Butch would be disgusted that his helper had to leave... Al he would warm up by the stove and then rock babies sometimes two at a time.  He recalls rocking babies was much better than chopping wood.

Since I am the oldest Grandchild and the cousins closer to my age were not at the reunion it was a bit strange.  I did have a good visit with several younger cousins.  The cousins that I grew up with were not there (Max, Diane, La Rae, Linda)  only one was there Vickie....the rest were all my other baby brothers age or younger.   But I do recall when their mothers were pregnant with them....strange perspective I know.

We stayed as long as we could, the perfume and aftershave were intense even outside.  Far Guy was struggling and felt like his lungs were burned.  Sadly he still feels that way many hours later...one of the many reasons we rarely go out in public.