One of our neighbors brought us a box of produce! 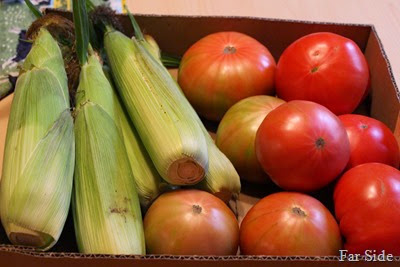 The tomatoes are the best ever!  We had the sweet corn and one of those huge tomatoes for supper last night.  The tomato was so meaty you had to cut it with a knife into bite size chunks….talk about flavor!

Curt has been growing produce especially tomatoes since he was a boy in Arkansas, he started growing tomatoes to sell to help out his family.  He never tired of growing them and now at 80 something he still grows and sells them.  He puts a sign out by his driveway and is known locally as The Tomato Man.

Curt knocked on the door yesterday and said here try these!  Far Guy took him a whole bunch of “flats” the flat boxes to put produce in earlier this summer.  Occasionally he has computer troubles and we try to help him out. He is all alone, his wife died several years ago.

He explained why tomatoes sometimes crack.  We always thought it was uneven watering.  Curt says “Night time temperatures that are cool makes the skin of the tomato tough and inside the tomato is still growing and finally cracks the skin.”

Curt grows mostly old fashioned tomatoes …ones he had good luck with over the years, if he can find the seed.  We used to plant all of his seeds for him, he would come visit the seedlings in the vegetable greenhouse and about Memorial Day he would bring over his van and fill it with seedlings.  Far Guy used to breathe a sigh of relief when those plants were gone.

This year we had two tomato plants out in the raspberry patch…they both died.  We are not the gardeners that we used to be.

I can just imagine how good the tomatoes and corn are. Have a good day.

Wonderful! Nothing like fresh veggies. Matter of fact, I need to get out in my garden and do sweet corn.

I can just taste the home grown tomatoes and corn. Yum!

The green-eyed monster of jealousy has visited me! As I was picking up corn yesterday,I was complaining to Mr. Merrick, our last farmer in town, that I haven't had a good tomato in years. He does sell tomatoes himself, and yes, this could have been a rude thing to say to him, except he said he's had a tough time with tomatoes himself. Seems there's a blight in these parts that stays in the soil and even travels by air.

There is nothing like a fresh tomato. I have not been able to grow nice tomatoes in Texas and it ends up being less frustrating to buy them at the local vegetable and fruit stands. What a nice neighbor!

I grew tomatoes for two years with little luck, but this year, the ONE year I didn't plant any, has been the best for tomatoes. I steal them from my neighbor's garden. :-)

Yummmmmy! There is nothing finer than fresh tomatoes that ripened on the vine.
Thanks for the info about the cracks - I wasn't aware of that. I also thought it was a watering issue.
I did read that commercial greenhouses overwater to encourage rapid growth and large tomatoes, and the end result is a pretty tomato with little taste.

I had my tomato plant die also...although, I did have another one to take it's place!

Nothing beats a home-grown, vine ripened tomato! Thanks for passing along that bit of advice from The Tomato Man. There are a lot of us out there who are homegrown tomato fans who have puzzled over that for decades. Maybe he should start posting his advice on a blog :)

My mouth gets a lot of water in it when I see corn and tomatoes like these.

Now those are pretty tomatoes! My tomatoes are not keeping very well these days. I think our growing season is about gone. That corn looks delicious too.

Our older friend who gave us peaches is now in the nursing home. I think he still takes care of himself but he loves all the company there. They just gave him a military quilt last week. I don't know if grandson will let me get peaches or not. I never get my vegetables in soon enough so I am about ready to quit trying. The neighbor lady is gung ho for me to plant more tomato seeds as she gave me a bunch of medium sized pots.

THat's okay …it is time for other to shine with their gardens and share with you!

What a sweet neighbor guy you have. I'm betting he looks forward to 'chewing the fat' with all his tomato customers. Keeps him active and going!!!

What a great neighbour you have!

I love homegrown tomatoes. Locally, they are just starting to ripen.

Now that is my kind of friendly neighbor. Corn and tomatoes. What could be better for a summer supper.

Nothing like fresh grown tomatoes. Our local greenhouse does a great job with tomatoes and english cucumbers!

We are now enjoying fresh tomatoes from our garden every day. I love tomato time.

Bless him and his produce and trust me.....if he gardened in Arkansas he is a talented gardener! I thought I was pretty good until I came here! Gardening in the Midwest is easy but down here...be prepared! I wish he's give me some tips! LOL! I have great respect for Arkansas farmers and gardeners!