Wednesday night we had a string of storms come through.  I heard the rumbling of the thunder rolling across the area.  I was anticipating many lightning strikes like last week.  Other than the thunder we were quiet.  It rained. Chance hid.

This morning we found out that Companeros a Mexican Restaurant where I liked to have a large frozen original margarita burned to the ground.  Possibly caused by lightning.  It wiped out The Dorset House ( Ice Cream and other things) too…both owned by the same people in the itty bitty berg of Dorset Minnesota. 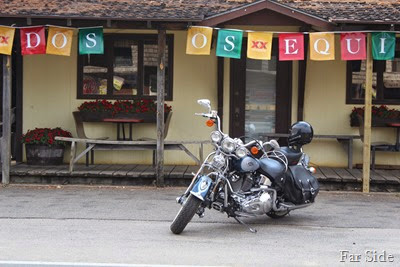 During weekend summer nights people are lined up and sitting on the benches outside waiting their turn to dine. It was a great summertime place to eat.  Far Guy would have a Glenny’s ( a specialty burrito), me a Shredded Beef Enchilada, Jen a Seafood Enchilada, Andy usually a Glenny’s or Fajitas, Adam liked Corndogs and Noah liked their cheesy fries although he was getting to like enchiladas and burritos.

We heard there was another fire near Park Rapids. Six local Volunteer Fire Departments were called out to fight these fires.  Turned out that one was at Ray’s place.  He is an old Navy guy who is part of the local Honor Guard.  If there is a Veteran’s Funeral in the area then it would be Ray that played Taps.  He and his wife lost everything and had no insurance. 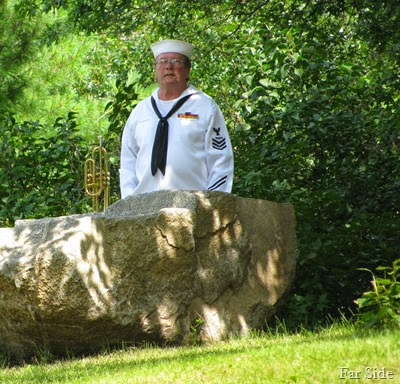 In the news footage it showed his Trumpet all coved in smoke and ash residue.  Sad.

Ray is a year younger than me, his Dad was my fourth grade teacher.  At 62 it will be a struggle to rebuild.  He and his wife have moved into their RV for the time being.

Lightning fast that is how fast things can change.

That's horrendous. And, as you say, it came out of nowhere. It's heartbreaking when you hear of things like this - and the tragedies in the Middle East and Ukraine.

Oh, how sad. And scary, how instantly life can change. I hope all who Ray blessed with his trumpet will rally round and help him and his wife back on their feet. But then, Minnesotans are good at that.

Here in the Northeast, we don't usually expect dangers like that. So sorry to hear about Ray, a man who sounds like his thoughts are usually of others.

Such sad news this morning. And yes, things happen just that fast. So sorry about the loss of a great restaurant and Ray's house. Hopefully Ray's friends will rally round and help he and his wife out. Have a good weekend.

In the blink of an eye. Makes me grateful every day that those things don't happen to me or my family. But they could, you know. Sorry to hear about all the fires and hope that Ray and his wife can have some good luck now.

Saw the sad news in the Enterprise yesterday- those restaurants were such a nice gathering spot for people! And great food and ice cream. Sure hope they were insured! Certain that people will rally around Ray and his wife.

So sad for your friend and the shop owners who lost so much in the storm. Ray and his wife may decide to just live in the RV like so many people who really enjoy that life style. But anyway, best to them as they try to get their life back together.

Very sad - alot of changes for this family and all families connected to the restaurants. :(

Incredible sad to experience such loss. No doubt the community will rally around these individuals and assist them in rebuilding their lives.

A person just never knows when their luck will run out. Thankfully there was no loss of life in those incidents. I wonder why Ray had no insurance. I'm sure the community will rally round to help them out.
Thankfully here, thunderstorms are rare, although it's exciting when we get one.

That is scary and that's why I am afraid of lightening. I am very sorry about Ray and his family. You just never know!

I saw that on the news - so sad. Grateful for no loss of life, but still such a hardship for those involved. One doesn't usually expect such weather this time of year, either...

How awful! We lost everything in an earthquake and know the feeling. We had to focus on the fact that we all were alive and take it from there. I hope your community can rally to help these people.

Oh that is sad news when anyone loses everything so fast like that. I hope no one was injured in all the fires.

Oh, how devastating--not only the loss, but the thought of losing it all when there is no insurance coverage. Is there any community fund being set up for him? If there is, please post the details. I'm sure if a lot of people pitch in, it could bring your friend at least some relief. How awful to think he has no resources, not even for a home (besides his RV). With winter coming, he and his wife will definitely need something more than that :(

Terrible and sad news. The same thing happened to a friend in TX last year.

Damage like this is hard to understand. Both places wee very valuable to the community. I hope the community can rally behind these folks and get thm back to normal.

So sorry to hear of Ray's troubles. I thought you had to carry homeowners insurance…..???
I hope your community rallies for him. My dear friend Katherine IN texas, her daughters home was struck by lightening about a week a go. They lost everything too, but have insurance thank God. The stress of losing your home has got to be awful.

How sad for all who had property destroyed. There is no accounting for lightning, but no insurance? Well, that's another issue.

If you don't have a loan on a home then you don't have to have Homeowners Insurance. Many poor people just cannot afford it and it is easy to say that we will try our luck without it if you own your home.

It sounds like the two restaurants were under insured also...I heard today that they will not rebuild. :( Sad because they employed many people in the summer.

Very sad but they should have used the money for the RV for the insurance. I don't have an RV but I have home insurance and I own my home free and clear. But they sound like wonderful people and it is very sad especially at that age. Hopefully they will be able to get back on their feet and the people they employed too.

I am really glad that Ray and his wife are ok. It will be tough to regroup. I hope things fall in place that they can get back on their feet hopefully with some good fortune this time around. We are having a lot of arson going on in the Des Moines area. I hope the Mexican place can get creative and return for business.

Hope all works out well for everyone involved. I know from experience that when something happens that appears to be bad, it sometimes can turn out well in the end.