There are just a few photographs of my Great Grandfather Yliniemi.  I have just two. All with other people.

One year a cousin did a drawing from one of the photos.  My parents have a copy…  I scanned it a number of years ago. 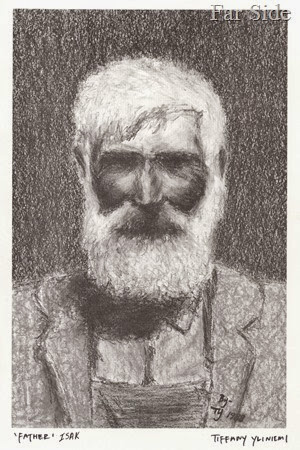 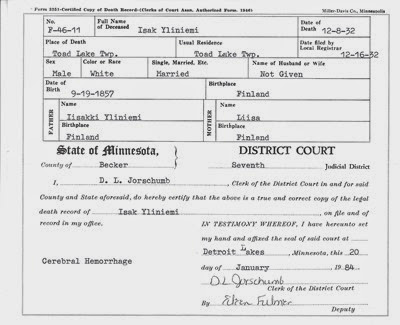 Death Certificates are only as good as the people that are giving information.  Notice he has a wife but she is unnamed.  His father is listed as Iisaki  most likely this is his Godfather Iisak Ollinpoika Yliniemi (no relation.) I believe his father to be Juho Mattias Ala known as Matti.   His mother is listed at Liisa  ( Liisa-Greeta). They were not married.

Everything is complicated. In the Finnish State Church communion is required.  Therefore a public repentance of adultery was needed before either Matti or Liisa could take communion.  She repented publicly twice (two children), Matti did not repent and the last time he took communion was in 1856.  To further complicate things records are in Swedish because Finland was under Swedish rule.

Juho Mattias Ala was born January 4, 1825 in Kittila Finland, his father was Olli Ala who was born in 1792.   Olli moved to Norway  with his children  and Matti was separated from the family.  Matti was in Finland in 1841 and was employed as a farm hand by Liisa-Greeta until 1862.  He fathered at least two children with her…Isak born in 1857 and Greta Matilda born about 1853.  It is believed that Matti Ala came to America ( something to research someday.)

My Great Grandfather Isak died of a Cerebral Hemorrhage on December 8, 1932 at the age of 75.  He most likely died at his home in Toad Lake Township.  I have not located an obituary. ( Something else to put on the list.)  He is buried in Pickerel Lake Cemetery.  I am not certain that there is a headstone.

That is so very interesting. I know so little about my ancestry except that all my ancestors came from the Black forest region of Germany. My mother's family became farmers and my father's family settled in the city. you are fortunate to have so much information about your family.

What a talented person who made that drawing!

What a fine drawing. You know quite a bit about your ancestors, or as you say, your roots. I know very little about mine. :-)

Always so fascinating to see what you have dug up on your family. I do agree things get much tougher when you track back to the overseas ancestors - that is pretty much where most of my reasearch has halted.

Absolutely fascinating. Keep going with it..!

Interesting walk through history! Those names are fascinating!

I'm still trying to work out how one pronounces Yliniemi..

http://www.yliniemi.com/ is this your cousin's work?

It's taken blogger so long to get to the comment form that I forget what I was going to write. It's surprising how much info is there about our ancestors. We just have to find it and interpret it so that it fits in with other stuff. It's a real puzzle.

Sounds like it was complicated to sort out the facts about your great grandfather's parents. That must have been quite a "situation" with two children born out of wedlock, public repentance, etc. it must have been difficult for the family, children, too.

Yes, old documents need to be validated with even more documents. You have gathered a lot of wonderful details.

You have a talented cousin. It's wonderful that you got that scan of the drawing to preserve and pass down.

Actually, you have some family history records going back quite a way. You are looking in challenging territory in the early 1800s. I know I certainly am stuck there!

You might have some luck searching for an obituary in a foreign language newspaper, rather than just the local paper. Of course, that means being able to find your way around in another language. How's your Finnish?

I really think it gives people pride and confidence when they know their "roots". It's wonderful that you have so much information about your family and Far Guy's family. My birthday is January 4th too but I'm a bit younger. LOL! The drawing is so wonderful.

Those are some names that I would have a hard time pronouncing. I love the drawing, it was done splendidly.

Are you familiar with the web site Findagrave.com? I put in the name of the cemetery and location and it came back with information about Isak Yliniemi. You can request that someone in the area take a photo of his grave and post it on their site. Here's a link to his page: http://www.findagrave.com/cgi-bin/fg.cgi?page=gr&GSfn=Isak&GSiman=1&GScid=83052&GRid=95752584&

What a handsome man he was!

It wasn't always a simple thing to get married back in the old days.
Interesting history.

Yes I use Find a Grave all the time. I live only about 12 miles from the cemetery so I will go over there myself one day:)

Wonderful blog post. It's the first time I've been here and I'm hooked. I read a comment on another blog about how people scan and post old family bibles on Ancestry.com and wondered if you've looked there? I am going to get back to my own family research as you've inspired me to get back to digging up our families past.

My wife did a drawing of my great grandparents for and Aunt from a damaged photo. It is all in the past now and nobody shares in that line of cousins. We didn't have a scanner or good camera at the time so we have no visual memory of the original nor the drawing.

I forgot to mention how detailed you have been able to be with this tree branch. It is so great to know the lineage.