My paternal grandmother was beautiful. 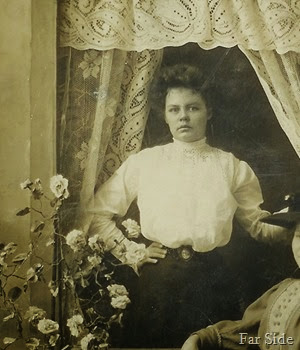 This is one of the early photos I have of her that was  probably taken in Michigan …before she joined her parents in Minnesota.  My Dad said that she used to travel back to Michigan to visit her friends every so often.  She was 21 when she left Michigan. 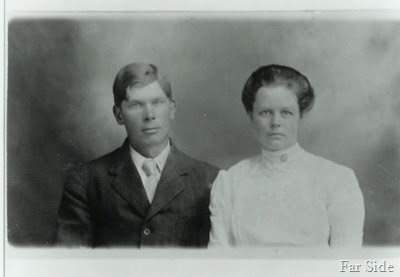 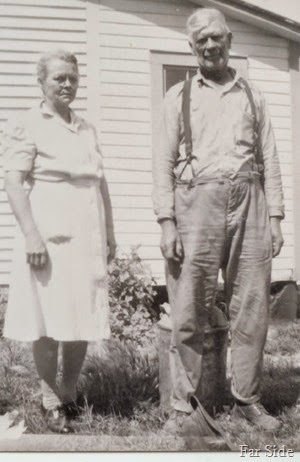 This photo was probably taken about 1950.  Note that my Grandpa dropped his hat and set the cream can down for the photo.  I wonder if those are some of Grandma’s Hollyhocks in the background…they were her favorite flower. 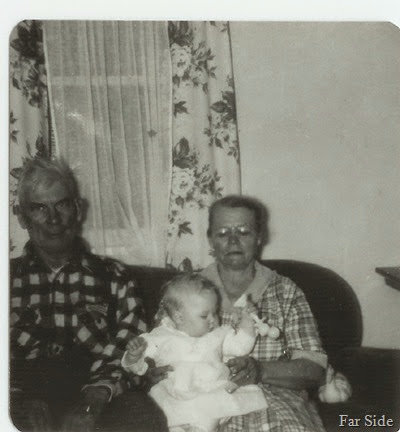 This is me with my grandparents.  This photo is probably from 1952.

Grandma was mother to 14 children ( 12 sons and 2 daughters). One died in infancy he (Einerd E.) was six months old in 1925.  She suffered the loss of a son (Arthur) in World War II  in 1944, he would be buried in a Italy at the Sicily-Rome American Cemetery, Nettuno Italy.  I wonder how traumatic that was for her?  She was a midwife.  Men would come and get her in the horse and buggy to help with the birthing of their babies.  Sometimes that was sad for her also, my Dad says that if a baby was born dead or died shortly after birth that she would cry for days.  She was a good cook.  She ran her household like a General runs an army, all those boys had jobs and they did them without question. She smoked a pipe every evening and she loved Hollyhocks.

Thanks for sharing these memories of your grandparents. I am always amazed to hear about women having so many children back in those days. My great grandmother had 16 (that survived). I love that first photo- she was a very pretty lady.

Your grandmother was a very beautiful woman. Thanks for sharing.

I think that having 14 children herself probably qualified your husband's Grandmother to be a midwife! She sure must have known something about birthing babies from her own experiences. What an amazing woman she was. I don't know how those women survived having so many babies.

Very interesting woman. That was way too young to die, though. She looked to be in fairly good health. I'm sorry you lost her so young. Thanks for introducing us. :-)

Your grandmother's appearance didn't change all that much over the years - nor did your grandfather's.

She was lovely! I love your comment about her running her household like a general - as all good midwestern Moms did! Especially ones with 14 children! :)

What a delightful memory to share with us. She must have been one of those very strong women to have had so many children and have such great control over the household.

The part about her smoking a pipe made me smile:) I wish you had a picture of her smiling though!

That's a great account of your grandma. I wonder how long we would live if we lived under those conditions?

My grandmother also delivered babies. My mom dreaded it as she would be asked to stay for a week at a time leaving her own family at home to take care of themselves. That sounded like a lot of children, uncles and aunts for you, and then I remembered my one grandmother had 12 losing a set of twins. It would have been nice to have known your grandmother for a few years.

One of my grandmothers had 13 children. I think five died in childhood. She lived to the age of 99! I don't know how these women, like your grandmother, coped with all of the work and hardships.

I especially loved the visual of her smoking a pipe at night. I think losing the babies would be the hardest part of being a midwife. Well, losing the mother would be absolutely dreadful, too. She obviously did not become hardened by it. :)