I think I need another retreat already!

The funeral for my Dad’s  cousin Shirley was on Monday morning.  Shirley was never married so many of the pews were empty.  Cousin Elmer gave a good sermon, followed by another preacher…it was a “twofer”..two sermons for one service.  The song books are really large and heavy…they have lots of songs to sing…many are translated from old Finnish songs.

The church is rural and holds many memories for me…Holy Roller Funerals with people wailing inconsolably and people jumping over caskets, funerals all in Finn and holding the songbook not knowing even one word. Trying to sing What a Friend We Have in Jesus in Finn.  The melody is the same.   Several of my uncles funerals were held at the church…and finally my grandfathers funeral. Many times it was a different kind of “twofer”  first a service in Finn and then a service in English.

Shirley was a very soft spoken shy lady.  She was my Aunt Lila’s room mate in the nursing home for many years. Shirley and my Dad were double cousins.  Shirley’s Mom and my Grandmother were sisters and Shirley’s Dad and my grandfather were brothers.  Shirley loved flowers and would visit the greenhouse with her sister every spring.  When Shirley was growing up she had a speech problem plus she was shy.  My Dad used to tell other kids that he was going to beat them up if they were mean to Shirley.  Shirley was a year younger than my Dad.  Shirley never learned how to drive yet she had a very successful career as a lab technician.  Cousin Elmer told how when she first retired they needed her back up at the laboratory in Bemidji…she didn’t drive so they sent a cab to pick her up…60 miles one way.

We skipped the cemetery and the funeral lunch…although it smelled really good!

We stopped by the house and got Chance and did our errands in town and went to wood carving.  Came home and washed my vehicle,  grabbed some supper and went back into town to the Historical Society Program that was all about Earl Fuller’s home movies of the 1940’s taken in Park Rapids.

Stick a fork in me I am done…I will stay home tomorrow..unless turning leaves are calling my name. 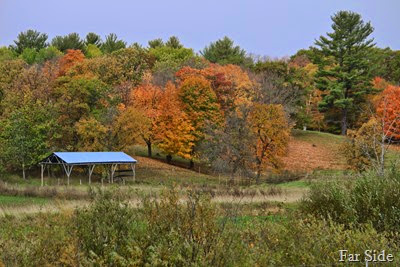 Shirley sounds like she was a nice person - I'm sure she will be missed by those that took the time to know her.

The home movies sound interesting. Your Aunt shirley sounds like she was a very interesting person. My condolences on your loss. Love the little picture at the end of your blog.

So nice to see the family support for Shirley, who must have been really good at her job! I'll be the movies were fun. Glad you had a nice day after the funeral, especially if you were seeing sights like the last picture in your post.

RIP, Shirley. Glad you made it to her funeral. She would have been glad to know her protector from the old days was there. :-)

Glad there was family support . Shirley sounded like a lovely person ! Wonderful photo ! Sorry for your loss !

What a lovely celebration of life!

Thank you for sharing the changing colors with us.

Sounds like a whirlwind of a day. Take a day off! Love the photo. Colors must be at peak up in your neck of the woods. Don't blink! :)

Shirley sounds like a wonderful lady and I love your description of some of the services! Awesome! Get some rest!

So many different memories. My wife had a lot of double cousins with cousin brothers marrying sisters a couple of generations back. It is interesting that the Finnish traditions still exist but you are far enough north that it can. Northern Iowa was doing double church services with German and English services but that was gone by the 40's. All the memories seem like good ones and Shirley had a good life anyway. Take your day and enjoy it with the leaves.

The second language stuff here died out in the early 1950's Mennonite and Lutherans tried various combinations of German and English and finally dropped the German. It was rather sad to lose the second language.

Holy Roller funerals sound pretty exciting for the mourners. We Norwegian Lutherans were a more stodgy lot, I think. We sang holiday hymns in Norwegian in church when I was growing up and it sounded like such a sad, mournful language to my young ears.

Great tribute to a simple important life!!!
The colors are starting here in chicagoland

I'm thinking Wolf Lake is near Bemidji on the Mississippi. But then again maybe not. So many Lakes. So many memories. So few fish..... Ufda!

Somehow I got behind on your posts. I'm catching up. You have been very busy, and now you are talking about making a new list of projects!
It was interesting hearing about cousin Shirley, her funeral, and the old church memories. That kind of heritage experience is rare in these parts.

It's too muddy here to drive anywhere! I think this rain will ruin what leaves and color we have.

I bet you were exhausted! I was this past week with too much socializing and being "out and about". I am a home body and working at home never tires me as much as being "out and about". I used to be a medical lab technician years ago and loved it. I loved the people I worked with and the work itself. She sounds like a very talented and gentle soul.
You have Fall! It was 87 here yesterday and supposedly it's coming after some bad weather moves in tomorrow night. Then 70's....we have very little color change and I am sick of summer so bring it on..Fall, cold, rain, snow....I am tired of sunny days and heat! LOL! Lucky you!

Funerals are always hard. The old movies sounded like it would have been interesting, though. You guys need some down time, I think. :)