I could have lists of my lists if I let my OCD take over.

So I only have one work list…the fall list of things that should be done…before it snows the snow stays on the ground.  It is cold enough here to snow..tonight we have freeze warnings.

Yesterday we tackled the sauna and gave it a good fall cleaning.  Getting rid of cobwebs and dead ants.  I washed the rugs, windows and the light fixtures.  I tossed some of the wind chimes…they were not worth repairing.  I did repair one…it may make the winter. Next year the white trim will need to be painted and the buckboard seat will need to be sealed again. 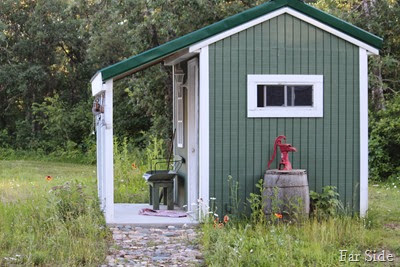 I washed the windows in Far Guys vehicle.  Chance helped by sitting in the back seat waiting patiently for the vehicle to move.  He is a real pain in the butt when you are cleaning vehicles…he doesn’t quite understand the concept.

It was too cool to finish painting the garage entry doors and trim.

We worked on some new signs for the neighborhood.  I wood burned the house numbers… Far Guy is in charge of sealing them and putting them up.

On my photo list was a field of sunflowers.  We found one near Crookston Minnesota last weekend. 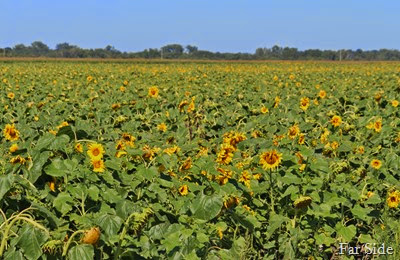 It was not the most perfect field…it had suffered some wind damage. 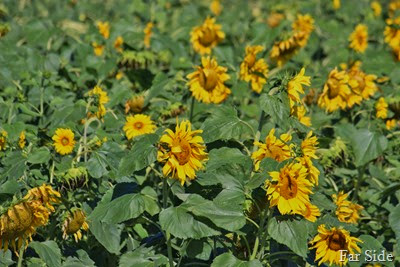 I was still happy to have found it.

We made a list of everyone we contacted with our address change….good thing too,  we have referred to it several times.  What a pain in the butt..we still have to update our Drivers Licenses.  Just moving the mailbox around the corner created lots of time spent on the computer and on the phone.  I was on hold with one magazine company for 25 minutes before my call was answered in the order it was received…they must have had only one person working.  Let’s just say I abhor classical music and that phone call wait almost pushed me over the edge.

All that because you moved your mail box? You are the only people I know with their own sauna....awesome!
Do you go out there in the cold? Is that what they're for....cold, hot, then cold to get the blood circulating?
I had to look up OCD as I didn't know what it was but I do know I am a list maker. I've been making lists since I learned how to write. Nothing wrong with a good list in my opinion especially if you have a zillion things to do.
Nitty and Annie do that same thing when I clean the car. I open the back and they'll sit in there the whole time on the minute hope that I might actually take them somewhere..ha! ha!
Love the sunflowers even if they are a little bedraggled from the wind....have a nice weekend! It was in the 50's here this morning.....yippee!

I have lists all over the house; some get done others don't. Putting in a change of address is the worst thing to do. It is bad enough when you have to do it because you moved. But doing it because your mail box moved would put me over the endue. Have a great weekend.

I never make lists because I lose them immediately. But my husband makes them constantly. I guess somebody has to. And I sure know OCD, I have those tendencies myself. Laughed as I pictured Chance "helping" clean the car. :-)

Morning, love the sweet wee shed, so cute. .. Never make lists, forget them when I need them....love the sunflowers, so beautiful.Blessings Francine.

What a lot of work to just move the mailbox! I love your sunflower field though - even if it is a little wind blown!

My lists are pretty short, as I really need to schedule time for writing. But I couldn't live without my calendar to remind of upcoming dates. Every year I make a calendar for my kids with all the birthdays on it, to help them remember as well. I faithfully look at the calendar when I got to bed to make sure I now where I need to be the next day. Otherwise I get tied up in my writing and get lost. Moving is not an easy task...hope I don't do it again soon...almost three years now.

You needed the sunflower break. To bad they can't pipe sunflower images into a hold on the phone.

You make me laugh. Now I'm feeling behind. I have not started my fall list yet. I love the field of sunflowers.

Cute sauna, I think you need to do a sauna post. How often you use it, etc.:) Wish we had fields of sunflowers here, but then we have fields of daffodils, so I guess I can't complain. We do lists every once in a while. I don't think one ever gets all done.

It rained and snowed here yesterday, but the snow did not stick, thankfully. Hard frost last night, so Fall is here and hopefully we will get a nice Indian Summer.

It has to stop raining before I can finish any of my must do things. We are cold just like you today. I did get a carpet cleaned this morning with the rinse and vac and that has been on the list a long time. Your shed is a neat one. I need to repaint my garden shed. I may go green too. Or maybe the blue.

I'm on vacation and the only list I have is the list of things to see. As usual I have way more than I will ever fit in! Mom, well.
Chance isn't taking any Chances -- if the car does happen to move, he won't miss an outing, and better safe than sorry.

When I call places on my cell phone, I put it on speaker and work nearby - - like cleaning the kitchen. I can't stand waiting on it either. I'm impressed you could clean the windows with Chance in the car. Our boxer likes to like the arm rest and windows, too - - - yuck. The sauna looks great - - - very inviting.

Fall brings about some hurry up jobs. We had snow starting Mon. and minus 5 C(22 F) Tues and Wed. nights. So yard clean up can start as everything is toast!.

Oh those tasks to complete before your fingers freeze. Hope you get it all completed. We're suppose to get frost tonight also, I'm going out to cover my flowers in hopes of keeping them going for another couple of weeks. Stay warm.

I'm praying for cooler temps in Georgia. I love your little cottage. It would be my place out and inside would be lots of pink and white or maybe I'd do the reds and turquoise of the 50's with the red cherries. Oh it's darling. You'll have to share the inside. I'm new to your blog. Look forward to following you.

I know forwarding orders don't work for magazines, but at least it would buy you some time on reporting your address change to some other companies...I am reminded of something I had meant to mail you a long time ago, and am hoping it will still be delivered :)

I promise it won't be classical music :D

Surprised you still have sunflowers around. Thought it was getting too cold for them up around your way...

I hate to wait forever on the phone. I one time had to wait for 65 minutes...disgusted me.