Far Guy asked me out on a date.  He wanted to see the Homecoming Parade.

Remember back when you were in High School?

Homecoming week in Park Rapids was a big deal.  Each class had a float. A hay wagon covered  in chicken wire to showcase a theme.  We made many Kleenex flowers.  Thursday was a hectic day, the floats had to be ready and held in dry storage because the Kleenex would “melt” if it got wet.  Thursday night was the bonfire and snake dance.  I only attended once.  Thursday may have been the day that the Senior king and queen were chosen…we voted for our favorite earlier in the week.  Each class had an attendant…a boy and a girl and usually two little kids from the grade school.

Friday was the big day, with a pep fest in the gym followed by a parade. GO PANTHERS!  The big game usually against Frazee, Detroit Lakes or Wadena was held at 7 or maybe 7:30 PM and the Homecoming Dance followed. 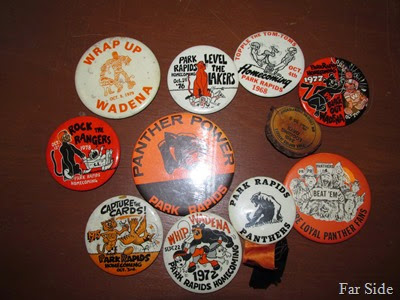 These are some old homecoming buttons from Charlene she donated them to the Historical Museums High School Memory Room.  Can you tell by now that the school colors were Orange and Black!

I remember the old football field back behind the fairgrounds.  Some nights were so cold you watched the game from your car…back then you could drive and park facing the football field.  If the team made a touchdown there was the honking of the horns.

The High School Band marched and played during half time.  You could buy hot chocolate and popcorn at the refreshment stand. 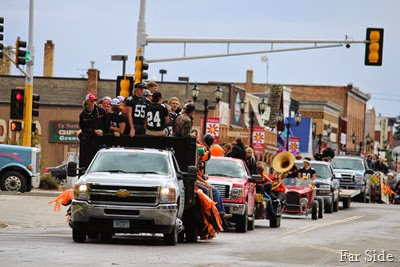 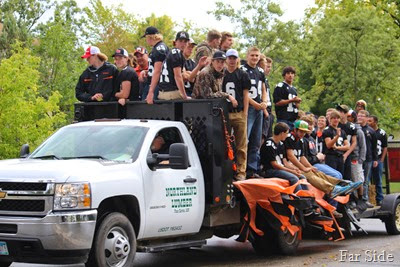 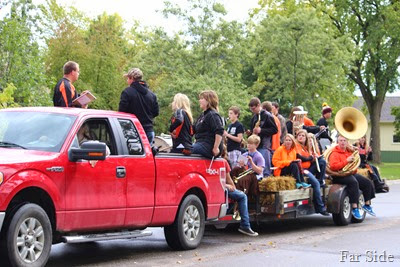 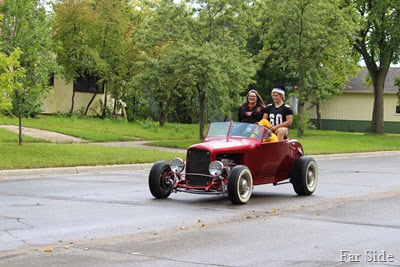 Homecoming Royalty.  We used to have a float for the Royalty…the girls wore their fancy long gowns and waved their gloved hands. 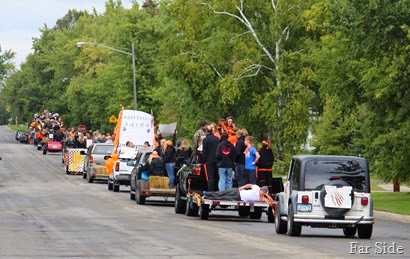 That was it.  In less than five minutes the parade was over and so was our date.  Far Guy asked if I would like to accompany him to the big game he would even spring for some popcorn…I said “No thanks.”  I think he was relieved.

Looks like not much has changed from your years in school. Your pictures sure have a small town feeling to them. I was never lucky enough to have had such a parade where I lived. I think there were five high schools in town, and mine had almost a thousand high school grads. I was invisible because of its size.

Something about those old homecoming memories, the games, the dances and the clothes. Lots of fun.

I think that looks like phenomenal fun! Also, no sense wasting bunches of time and materials for decorating something that will only be used a few minutes. Save that energy for the game and the resources for another project. One of the best focuses in life is on the people you love and work together as a team. That's what you did with your date and the kids did with their parade! Love it! Did Chance get to attend? Was he impressed with the activity?!!

If you think back to your day it a a big deal. It meant a lot to students , parents and town. It's good you go back to support the school.

Yep, that's exactly how I remember Homecoming! The school still has a parade, and it's pretty small - hey Main Street is only three blocks long, but the parade swings around and goes in front of the elementary where the little ones wave signs and dream about being in the parade like the big kids.

I don't remember my school ever having buttons. You have a great collection.
Looks like a great date to me. Have a wonderful weekend!

Well, the times, they are a'changing! I'd personally opt for the old floats with the homecoming queen in her gown, waving her gloved hand. A little more pomp and ceremony to that, even if all those tissue flowers were such a pain to make.

Your last line made me laugh.
Our high school colors were orange and black too. But we did not have a homecoming parade, or buttons. Much of the rest of it sounds familiar.

I have no idea what homecoming is - but enjoyed your photos!

Our colors were orange and black too. We were "The Hill Toppers". I was actually captain of the cheerleaders and Homecoming Queen my senior year so I FROZE a lot. LOL! I went to a very small school...not a lot of competition. Ha! Ha! Those were great years though and probably part of why I love the fall season....I spent so much of it outside. So nice that you had a date for the parade and one for the game too if you wanted it!

Sounds like a fun date to me! I never liked football much because it was slways so cold and sadly, my school never won a game in my three years of high school there. I guess that is some kind of record.