I suppose you are curious about the adventure I chose for my birthday?

Highway 38 between Grand Rapids and Effie Minnesota was the route for 47 miles of garage sales.  It was advertised as “Sales are great along Hwy 38!” From what I understand it is an annual event the third weekend in September.

Far Guy, Chance and I took off on Friday morning.  We headed to Bovey MN.  They have a cute little antique shop/cafe there called Annabellas.  We looked around and had chili and cornbread for lunch. 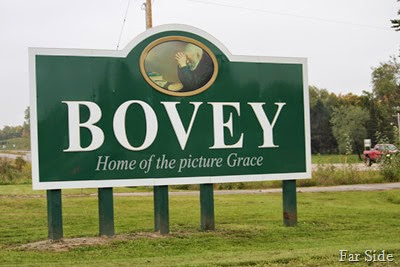 The picture Grace was taken in Bovey Minnesota at the Enstrom  Studio.  It is the official photo of the State of Minnesota. 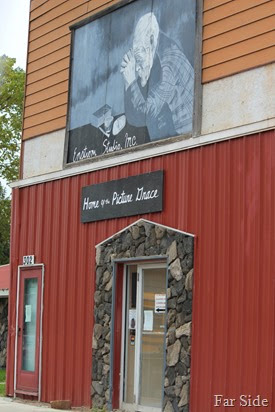 From there we tried to find a couple more antique shops only to discover that they were closed.  We stopped by the Proven Winners Trial Gardens at U of MN Grand Rapids…more on that another day…there were Mum trials and Hydrangea trials!!

We headed to Highway 38 for the rest of the afternoon, we got a taste of the garage sales, I purchased some old photographs…imagine that…some marbles..imagine that…and even some dice! 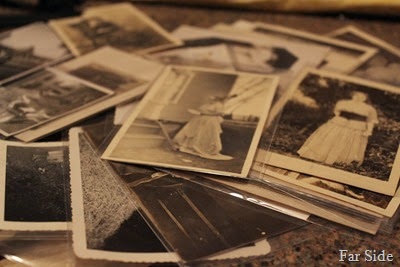 Chance was unsure about the motel and he was thankful that there was no elevator…he doesn’t like them.  There was a nice grassy area for us to play ball.  He is usually a real good boy…but then there was a knock on the door…it was some of his favorite people.  Andy, Jen and the boys…so he barked a couple of times.  Andy took him for a run!

Saturday we garage saled all day long…the boys had a mission to purchase items that they could use to build robots…they found some real cool “stuff.”  We had lunch in Marcel MN and trudged along all the way to Effie ( some garage sale goers don’t make it that far).  We did it!  There were hundreds of sales…some off of Hwy 38.  I wish we had counted how many we stopped at…some sales were in clearings with many many sellers.

Oh and at one of the sales a fellow gave me a box of Shiny Brites!!  I also got a real good start on collecting glass for the new glass flowers I will make next spring. I also picked up another blue bowl…Far Guys Mom always used to whip cream in hers…so now I have two. 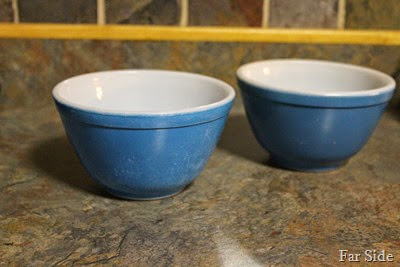 Pyrex made a set of nesting mixing bowls in the 1950’s.  The bowls were yellow, green, red and blue.  I had a complete set…one day a shelf came down in the laundry room…you guessed it my set of bowls was on the shelf.  So now I have Far Guy’s Moms blue bowl and a 50 cent garage sale bowl. Eventually I will find the complete set again…just like I found the first set..at garage sales.  Some times it is all about the excitement of the hunt!

It was a fun day…we got lots of walking in…and played musical vehicles…so we could visit with everyone.  We headed home a different route after the 47 miles…it was a great adventure!

For my birthday I got those Pentel Automatic Pencils I really really like to use from Far Guy and Chance! Along with garage sale $.

What a great sounding birthday! Family friend Mary had the painting "Grace" hanging in her dining room.
How fun that you rec'd a box of Shiny Brites! I know many of the antique shops you purchased your old photos from have closed, so I'm glad you found some at yard sales. I look forward to hearing about the gardens, too!

Now that is my kind of special birthday! I am so excited to know about the picture Grace. That was my Mother's favorite picture. Her sister had one hanging in her dining room, then mama had it for a while, now I have it standing in my old cupboard on the porch. Glad you had such a fun birthday!

Your birthday adventure sounds like it was a lot of fun. Sorry I missed saying Happy Birthday to you yesterday - Happy Birthday. I love your "ant"!!!!

My mother had "Grace" hanging in her dining room. She said it reminded her of her grandfather.

I have always loved that painting, "Grace." It's wonderful. Boy did you ever make out like a bandit! It sounds like you had a perfect Far Side birthday adventure. I'll bet you will share some of those more interesting old photos some day. :-)

Goodness! That is a stack of photos!!!!

I have a set of those Pyrex bowls from my mother in law, and I use them all the time. It's so nice to pick the right size to use for mixing, and they are so sturdy (until your shelf falls down). Sounds like you had a great time.

Sounds like an amazing way to spend your birthday and ahh the bowls. Didn't every kitchen have those and hand them down? I too had some (still have the green and the red one - the others were broken) handed down from my Mom! :)

Oh, I want to spend my birthday like that! What a great time you had. I have a set of three pyrex bowls from 1981, they were a shower or wedding present. All brown with a white flower design, I think, (without actually going to look at them) Saw a set of those at a garage sale on Saturday. I have quite a bit of glass ware collected (thanks to your post!) to attempt those flowers at some point. Although I 'm good at collecting the stuff needed for projects, and then never doing them:( Thought of you often when we were at Oliver last week and all the milkweed pods were bursting open and releasing their seeds:)

Oooh, what fun! I love hunting for treasures like that. I hope you find your bowls for a great price.

Our 141 garage sale is at the beginning of August. We never do that but someday we will. It would be fun to do it in a different state. More shiny brites. I have an empty shiny bright box I should send you for storing more. I remember Bovey for many reasons but the painting always reminds me of the little town. It looks like you had a great day.

Sounds like a perfect way to spend a birthday!

Happy Birthday! You are right...sometimes it is all about the hunt. My brother got my Mother's set. I remember it well.

While I don't like garage sales I do go to some in my neighborhood. We compare what we're selling and why and how much we are getting.

Sounds like a great adventure, you had for the birthday celebration! I have the same kind of pyrex bowls just a little newer, that my mother bought me back in the 80's. Glad to hear you had a good time, garage saleing.

You had exactly the type of adventure I would want on my birthday but my birthday being in January there are never any garage sales then....not even here in AR...I'd have to to Florida or the tropics, I guess. That is so cool and Chance got to go and you met up with family....that's a perfect birthday. Plus you got your Pentel and spending money? You are one lucky lady!
I love the bowl(s) and old photos. I can't wait to see the flowers you create. The only thing I would add would be ice cream....you did have ice cream didn't you???? So glad you had a great birthday!

Oh, that does sound like fun! That's my idea of a good birthday.

I remember those nesting bowls. My mom had a set, when she passed the only one remaining was the green one, and I don't know what happened to it. Glad you found the blue one, good luck with the others. Rummaging all day would be my kind of heaven!!!

Never heard of that huge sale! And you had a chunk of the family with you, too--what fun! Sounds like a great birthday and you even got some Shiny Brites!! :):)

I have "grace" hanging in my kitchen, have for years and years. It was in the Fellowship Hall of the church I grew up in.
That sounds like the best birthday celebration ever!

You really do know how to have a good time! I love that you bought more pictures and marbles. I have 3/4 of a set of nesting bowls but never remember which one we need. There are lots on Ebay, but your way of looking is much more fun!