Amish from Pennsylvania came looking for farmland a few years back. Farmland was much cheaper in Minnesota than Pennsylvania.  They settled in Becker County in Evergreen and Spruce Grove Townships.  It seems they came one by one until there was a colony.

One of the farmsteads they bought belonged to my maternal Grandparents.  For awhile they ran a bakery out of this farmstead, but the Minnesota Department of Health shut them down. It was rumored that they were still selling baked goods they just had to take their roadside sign down. 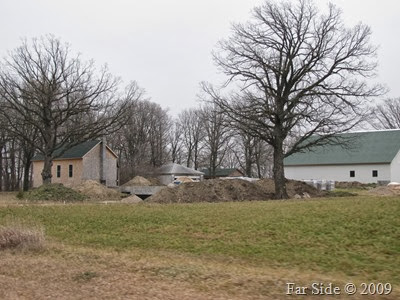 From the highway the old garage is unmistakable. 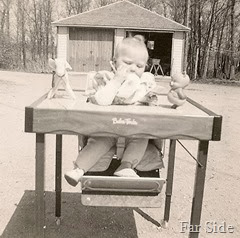 See the old garage behind me? 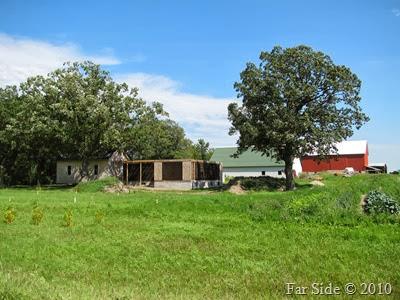 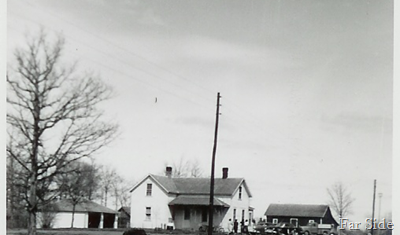 The Amish work hard and they have a wonderful land ethic.  Putting back more than they take out.  My Grandparents would be pleased with the way their land is being used.

This is a neighbors field. 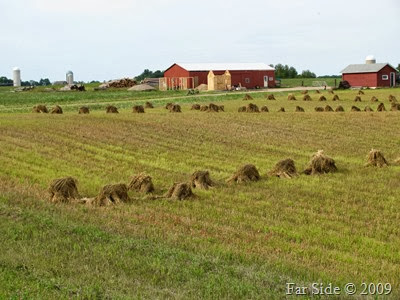 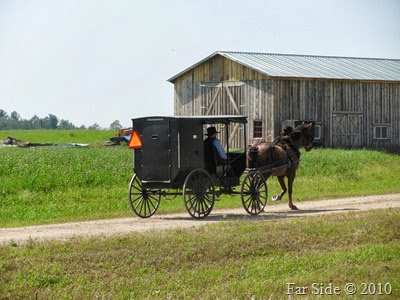 The Amish Semi used to haul benches was one wagon hitched to another. 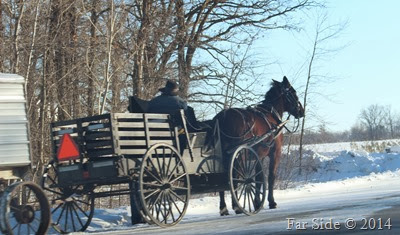 There is another colony near Staples Minnesota.  I don’t know if they are related or not.

I have photos of some of the children, they don’t like having their faces showing in photos so those will remain unpublished.

I would like to take more photos of them working in the fields with their horses.  Maybe I should put that on my photo bucket list.

There are some signs of furniture for sale and garden vegetables in the late summer.  We have never stopped..maybe someday we will.

We have lots of Amish in Miami County, also in Holmes County. They are good neighbors, a good addition to any community..

I would love to have Amish nearby. They don't live in the Pacific Northwest, though, as far as I know. I'd be glad to have them for neighbors. :-)

I would love to have some Amish people for neighbors. They would make better neighbors than some I have had in the past. I love their respect for the land.

I live near the Lancaster Amish, and I too, must say they are a HUGE plus to any community. I wish folks would let them live they way they want to.

Aha! Another idea of where to get fresh tomatoes next summer.

Lovely post and photos ! We have a big community of Amish here and some are our clients for photography of their horses they buy and sell and a few good friends we have in their community as well . They are wonderful people and I have so much respect for the fact that they haven't let modern technology take their way of life over ! I love spending a day with our Amish friends on their farms it is awesome ! Thanks for sharing . Have a good day !

I've visited an Amish community in Ohio, but had no idea here was one in Minnesota,

I'm curious. We're the power lines removed from the farm?

The Black and White photo was from around 1948. I am not sure what happened to the power poles.

I know there is at least one Amish community withing an hour or so of me, but there is a bigger number of them in northern Michigan not far from our family cabin. One of our favorite stores up there is Amish owned. It has everything except food items. And we always stop at our favorite Amish bakery up there if the timing is right. They have the best cinnamon rolls. And molasses cookies. And peanut butter cookies. And bread. ;)
~Laura

Unfortunately, in my mind, the Amish are forever connected to puppy mills.

Oh I'd have to stop and shop. THe Amish in Wisconsin have a thick ?German accent and are very hard to understand. They make beautiful things . THe don't use deodorant though….

Saturday night I ate at a restaurant that buys as much organic and natural stuff as they can, from as nearby as they can find it. I had "Amish chicken," which was juicy and tender and delicious, but the server didn't know who provided it. I knew of the Amana colonies in Iowa but didn't know until you mentioned it the other day that there were some in Minnesota!

We do not have any Amish in Alaska but we have "The Old Believers"
Oh yes, I did watch a documentary about Amish puppy mills. I wasn't pretty.
http://oldbelievers.wordpress.com/2012/05/07/alaskas-russian-old-believer-villages/

There are no Amish in the Amana Colony's the Amish are in and around Kalona, Iowa

It seemed strange at first to see the Amish buying my uncle's farm south of us. Now it is so common to see them driving into town with their buggies and selling baskets at the corner. It is a cool sound to hear the horse's hooves on the roadways.

It's so much better to have families farming the land, instead of those awful corporations, that plant and add chemicals, then hide behind a facade.

The pop up you mentioned might be from Blogher ad's they use keywords to link to ad's. I can't find anything on my version, but then again I am Canadian, so that might be the problem.

Neat post - enjoyed comparing the pictures... I think I recognize the neighbors area so assuming the subject property is south down off of the main road. I see they have furniture and veggies for sale in the summer along that road but I have not stopped - I should sometime :)

I've heard of the Amish moving from Pennsylvania to get better land prices elsewhere, so they could continue farming. But when I discovered there were Amish moving to a town near here in the Central Valley of California--great, fertile land, but I wouldn't exactly call this "cheap" land--I had to ditch that theory. I think they are just moving because every generation multiplies the number in their community, and you just can't all keep staying in that one same place. When people need more room to grow, that's when they move.

It must be real dedication to live their life. I guess if it's a basic part of your belief system it can be done.

They probably couldn't pay the $10,000 or whatever it is the government requires to 'certify' their kitchen. I wish the government would get out of our lives and let word-of-mouth decide if the baked goods are good or not.
It's good that they are there. As you say, your grandparents would be pleased. And probably are!
Thanks for sharing your photos with us. Have a great week!

I love the pictures as I have never seen any of the Amish people. I would love seeing those buggy on the road. Oh, and that cute picture of you!

Amish farms are so beautifully kept. I think you mentioned once that your colony was an off shoot from the Lancaster County groups. With their big families they just ran out of farmland in Pennsylvania. We loved visiting Some Amish shops and bakeries and farmlands last summer in Pennsylvania.

The farm does look lovely - well tended for. Love the horse and buggy pics too!

There is an Amish community here that sells produce in the summer as well as canned goods but it takes about 30 mins to drive there. You are right that they will take good care of the land and property. Do they use the electricity in the house? How about heat or you may not know. I respect their lifestyle but prefer mine with modern conveniences.

Also, I know there are different sects. Some use modern conveniences and some don't.

We've had large group of Mennonites move in here. They also are hard working and take wonderful care of the land.