We took a drive through Amish Country. 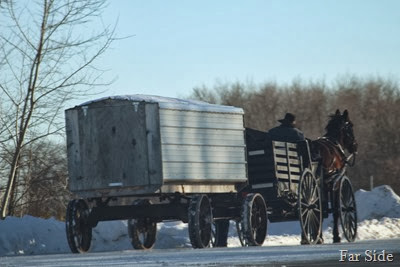 This buggy was stopped at the side of the road right by my Grandparents old driveway.  Far Guy thought it was quite a load for one horse.  Two gentlemen were conversing.

I wondered what they were hauling?  I thought and thought.  I even wondered if this was the Undertaker. 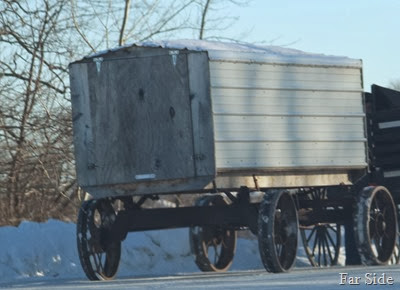 Later I found out from the magic box that it is an Amish Semi.  It is used to haul benches from one home to the next for their church services.

We were headed to a thrift/antique shop that was rumored to be open in the little town of Frazee Minnesota.  Sadly it was closed however it looks like an interesting place so we will return again someday.

I would have wondered about that strange boxy contraption. I see you have your pretty Valentine header up there along with my favorite blogging dog. :-)

Interesting! I, too, love your Valentine header. Tell Chance to have a happy Valentine's Day from Harriet...guess they both liked their cookie treats!

So so interesting, the Amish sure lead a different life......oh hate when that happens, look forward to going to a shop the closed.....I am doing that today, traveling the small town Thrift stores looking for treasures, have to get out even though cold out there, Blessings Francine.

I didn't know there was an Amish community in MN.

I also didn't know you were close to the Amish. Is the semi hitched to the back of the other wagon? Feel sorry for the one horse when they come to a hill.

The Amish community fascinate me. I suppose when they gather on Sunday, no one would have enough chairs for everyone. Makes perfect sense!! Stay warm and have a fun weekend.

How interesting.
We made a couple of thrift store stops this morning, but no great finds. I'm really itching for an antiquing day though!
~Laura

Well...learn something new every day :)

I'd say the same as Jacqi...you learn something new every day.

Yes the wagons were hitched together:)

I Love everything the Amish make..I remember when they came by horse and buggy to my garage sale in Osseo,WI..My DD was 4 and was in awe :)

I lived not far from an Amish community before I moved here. They are very proud people and their customs are very unique.

glad you found out that it wasn't the undertaker!

I love your header! I guess it is time to think about Valentines Day. I lost a week.
I get excited about driving country roads, seeing Amish buggies, and Semis !, and finding new antique shops to explore. I would love to do a ride along. I also like it that Minnesota snow doesn't prevent you from going exploring. Snow here is a driving nightmare. Fortunately, when we get it, it doesn't last long.

You and Far Guy get out and see the most interesting things!

We had Amish in several Iowa towns nearby and there is one not to far from here in AR and they sell at our local farmer's market but I have NEVER seen an Amish "semi". Too bad the store was closed.

My brother loves Amish furniture, and their pepper bacon. I wish we had some Amish people near here so I could window shop.
Stay warm and have a successful return trip to the antique shop. :-)

That was really interesting!

I didn't know there were Amish communities as far north as you. I always find them inspiring--how they are able to live out their values in such a different world. You might know they would have invented an "Amish semi"!

I haven't bought the book but a woman in Pennsylvania wrote a book about her Amish garden. I read at it when I visit the bookstore. She shares that the basement in her new house is for meetings and she has to clean her complete house when they come as they are all over the house while the meetings are going on. Babies are all napped in upstairs bedrooms. The benches convert into tables and everyone is fed in sessions until all have eaten.

Amish semi - - that's funny. Are the wheels on that wagon metal? Would that not give a rough ride to the contents inside the box? Have fun at the store when you get to visit it?