You know how it is when you have an vintage puzzle and you spend a while crouched on the floor next to the trunk fitting it together piece by piece and Tennessee has gone missing along with New Jersey?  Who would sell a puzzle with missing pieces anyway? 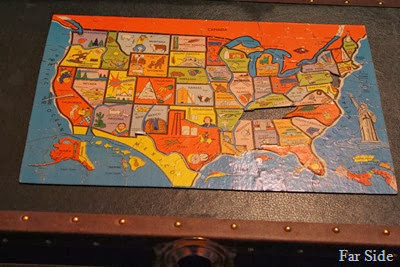 I wouldn’t so it ended up in the trash.

It ain’t fair to leave so much stuff behind that your children would be forced to bring in a dumpster to get rid of your stuff.  That is what happened to much of my grandparents “stuff.”  I wish they had given the grandchildren a chance to go through what they were putting into the dumpster.  Oh well I have too much stuff anyway.

I am still busy sorting and organizing.  I don’t see the end in sight yet.

That looked like a pretty neat puzzle if all the pieces would of been there. The hubbies family will have a heck of time when they pass away. They don't throw nothing out and have thousands of rare out of print books. Try it stay warm. Brrrrr

Yup, freezing my butt off still here too.......neat puzzle, I agree about letting the Grandchildren looking through the treasures, I wanted something from mine, but no.....Keep Warm, Francine.

Hope you will warm up soon. What a wicked winter it has been for so many.

Indeed. Friends and neighbors are giving us a lot of "you shoulda stayed where you were" advice. I've noticed in the south they focus on the temp in International Falls a lot. No wonder they think Minnesotans are all crazy. As to the dumsters, I've been unloading on Craigs list the past year to relieve my son of a future problem....:)

I downsized when I moved and I am still downsizing. It is quite an undertaking to clean out a home after a loved one is gone.

On one of our radio stations here, if the temperature is more than 2 degrees different from their weatherman's predicted high, someone has the chance to win $2000.
We are supposed to hit 11C or 52 F by next Saturday, but rain of course.
My kids both had the opportunity to pick out things from their grandmother's stuff. I feel sorry for them if WE drop dead suddenly, as then they would have to bring in a dumpster. I'm very slowly picking away at it. Emphasis on the slowly.

Ach, who needs Tennessee or New Jersey anyway?!!
You are so smart to winnow down the stuff. When it has to be done by family, time isn't usually taken to determine what has value and what doesn't. I know when we cleaned out my sister's house, so much was just thrown away. It made my heart hurt, but we didn't have the luxury of time.
Stay warm!

We once had a puzzle like that. I still visualize the pieces when I think of where a state is. It was a great learning tool and our only puzzle.

Just wanted to let Far Guy know what kind of snow we get in Arkansas, very puny.
You'll come on down.

At least they could have marked it as missing pieces. I know my daughter has had classroom projects that require puzzle pieces so she doesn't mind buying puzzles that aren't complete, but at least label it as such!
We're looking at hitting the 20s later this week. I'm looking forward to that.
You know I'm doing the same as you. But with running a business here, I'm afraid our kids will still need a dumpster when they go through everything...
~Laura

Weather can be a real pain summer or winter. I'm trying to get rid of some clutter and unnecessary stuff. It's not only hard but a big job.

Sorting, tossing, donating is the name of the game here, too.

That's a big gap between prediction and reality, for sure!
I love the puzzle. It would be hard for me to through it away.

We have been doing the same thing with 100 piece puzzles this week - - - had about 8 of them - - - tossed them all after the first three were missing at least one piece. We are chipping away at storage of "stuff" a teaspoon full at a time each week - - - like trying to empty the ocean!

Maybe you could sell the pieces online so someone else could replace their missing pieces???

I'm doing just what you are doing...I'm getting rid of stuff. I have way too much stuff and I really don't want it anymore. I find that now that I'm old I think of things like:---when I die do I want to have all this stuff just sitting here. When I get too old to clean do I want.... sort of weird to be thinking that way.

My one brother would sneak out a couple of pieces so when the puzzle was almost completed two pieces would be missing. He would then gloat that he got to put the last pieces in the puzzle after all the other family had put it together.

I hope I live long enough to clear out my stuff....I can see my kids getting worried already! LOL!

As a lifelong resident of Tennessee, I can tell you the state goes missing quite often. Must be that "Volunteer Spirit". :)