We still have snow, it hasn’t melted yet.  Only in my dreams.  I dreamt we bought a two person speedboat just a tiny little thing and we were someplace where the water was blue and pissy warm…so obviously it was not Minnesnowda! 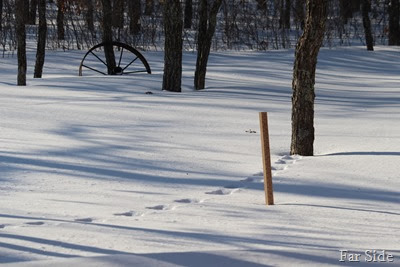 The snow stick is holding steady at 16 inches of snow cover. ( Last year at this time we had 20 inches at the snow stick.)  Those tracks appear every time it snows.  I think it is a squirrel that finds the distance too great for him to leap from one tree to the next so he has to make a run for it.

Then there is this little creature that burrows just under the newly fallen snow. 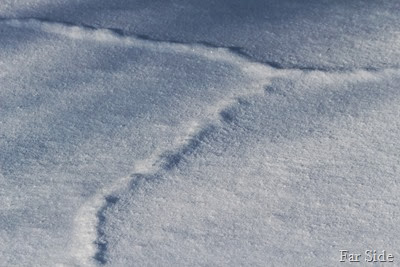 Patterns like this show up in the driveway.  Chance is very interested.  He caught a mouse once and enjoyed the hunt.

Out on the prairie there is a sea of snow.  If you look at the snow long enough you can imagine waves of snow.  Those are the Smoky Hills looking smoky in the distance. 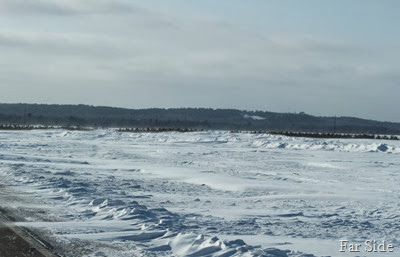 You can find snow banks to admire. You don’t have to look too hard either. 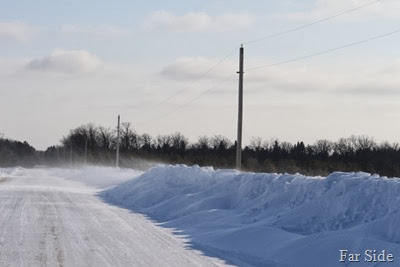 Far Guy says “Thanks for all the birthday wishes!”  We watched the USA vs Russia Hockey Game,  we went out for breakfast with my parents and then we ran some errands in town, came home and he took a nap.  I fixed steak and vegetables for supper and he fried some potatoes.  Other than the Hockey game it was a quiet day…except for the phone ringing with birthday wishes!

Always love your snow stick! Glad FG had a nice day. You guys enjoy your day.

Glad Far Guy had a good Birthday . We still have snow here but has been slowly melting each day with the sun beaming down on it , but today it is cloudy more snow to come but the good news is by Wed the temps are to rise well above 0 and even have a day of rain so with a bit of luck that's good ole spring pushing through . Thanks for sharing . Lovely photos . Have a good day !

Yes, I remember snow waves. I also remember the snow drifting for days on end. We called it ground drift.

One of these days I'll be looking at pictures of your pretty colored chairs you it in during the summer. Won't I? It WILL all leave one day, won't it? Seems like it's been forever. :-)

Upon reading that you watched the hockey game, I thought, wow, you were up early, but then I remembered the time zone difference makes it not quite so early. I was up and in my recliner trying to get another hour of sleep before I turned the game on for the last period and the shootout.
I think about you and your extreme weather and that snow stick often. At least you get some lovely blue skies between storms.

Happy belated Birthday Far Guy! I enjoy your pictures that you share. We had some snow this week and I enjoyed every minute of it. Sorry that you guys have so much. I know that you are looking for spring.

Soon, soon, the snow will recede, and Winter will loosen its hold.

I am so ready for the snow to go away!!!

Hmm, critters under the snow. Last year we had a vole hanging around and if memory serves it left a trail like that. I didn't even know what a vole was. :)

Sounds like a good birthday celebration. We got 4 inches yesterday, which I hurried to clean up because we are going to get 4-6 more tonight and tomorrow morning. At least it's above zero. Yay!

i think that sounds like a perfect birthday. Love the nap

So, Chance liked catching a mouse? Our indoor cat, Luke--and senior editor for my blog, by the way ;) --once caught a mouse, too. My husband was removing carpet and installing new flooring downstairs and must have unstopped some antique mouse passage to the living room. Luke was skulking around for hours like something BIG was about to happen. Then this startled mouse ran in--practically into Luke's mouth. Luke looked at us like "NOW what do I do?" Such are the deprivations of the housebound pet cat. I'm SURE Chance's big hunt was much more adventurous that that!!!

I bet those tracks get Chances nose twitching

The wind and the sun and the shadows does make for lovely photos! But I'm really tired of those lovely things and am ready for green!!!

This is Monday and walked to the neighbors in new snow that going above my ankles. I though we were done with this stuff. Steak and fried potatoes sound good for Birthday dinner. We are warming up for a short period this afternoon after the snowstorm this morning.

Oh, Happy Belated Birthday Far Guy! Sounded like a perfect birthday to me!