Ack!  It is a struggle.  I am still organizing and selling, trying to make a dent in the crap fine collectables I have collected over the years.  I like to sell  local on the Facebook site versus eBay which involves packing and mailing.

I don’t know that I am making a dent yet.  Far Guy says “Well,  more stuff is going out than is coming back in.”

I have quite a mess upstairs…I have a spot to take photos and then local stuff, eBay stuff and rummage sale stuff and donate stuff.   I hope no one is coming to visit that needs a bed for awhile.  One good thing about upstairs as I can leave it a mess and come downstairs! 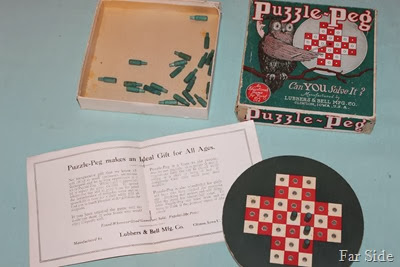 I am learning as I am going along.  Many things need to be researched.  This is a Puzzle Peg from 1922.  I have to re photograph before I put it on eBay.  I will put all the pegs in the holes.

Did you know that bingo was originally called “Beano” and then someone called out Bingo one time and that was all it took and Bingo was born?

WELL.  How about the game of RIGHT.  Was it some ones miserable failure?  If so I have ten of the cards. 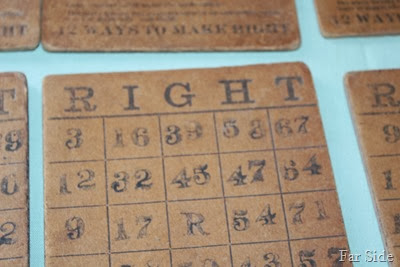 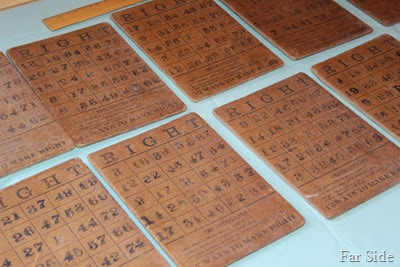 12 ways to make RIGHT.  The cards were hand stamped with numbers. Some numbers overlapped and appear in two rows like R 17 and I 17.  I wonder if that made it more difficult?  The cards are made out of some kind of pressed wood/fiber.  I have had them a long time…20 to 25 years and I cannot recall exactly where I purchased them.  For awhile I was fascinated by really old games and I guess this one qualified.  I have had no luck finding any like it on the web.  I know I am not the only one out there with these cards.  Then again maybe I am and I am filthy rich and don’t know it yet..these cards could be priceless.  Ya sure. 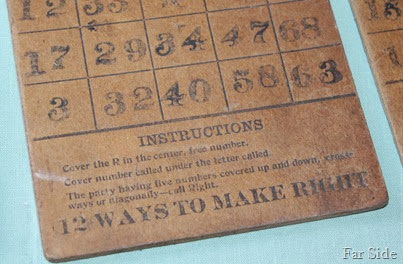 The perfectionist in me wants to know more info about them before I put them up for sale.  Who made them and what year?  And why?   It frustrates me that I cannot find any information…but maybe one of my readers have seen these before..maybe.

I hope a reader can help you with more info on the cards.

Oh what neat old games, hope you find out what you need, sorry, I am no help, Francine.

Those are some neat old games. I never heard of either of them. Good luck getting rid of your stuff.

I never heard of them, either. Bingo is so familiar that I cannot imagine it ever being called Beano. That sounds rather flatulent. :-)

You have some wonderful old games.

I remember the puzzle peg game but I don't remember that it was called puzzle peg. I hope you show all your games because each one comes with so much history...like beano!

Ooh! I would love if someone could jump in with some info on Right!

I love the peg game and can solve it, ending with a single peg. Thanks for jogging my memory this brain teaser.

I've never been any good at peg games, though I used to be able to hold my own at cribbage. Maybe you could email the pictures to some museums and they might be able to help you.

I didn't know that Bingo was formerly call Beano. And I've never heard of Right. I hope you can find some info on it.

I have a big stack of stuff to donate and sell. Now hubby wants to put a gun safe in MY closet. Time to clear out some clothes...lord knows I have too much anyhow!

That is one thing I have never researched. I have the kids games but the ones I played with made it to the dump a long time ago. My "John and Iva" source did not have games when they moved to town.

It looks like you had a wonderful collection of old games. Cool stuff. I hope you find out more, and then share it with us.

I Love your new photo header. How do you do it on blogger?

I like your new header . I have never seen those game cards . I wonder if there is a old game collector out there that could look into them and let you know there has got to be I mean people collect all sorts of things . Hope you can find out would be interesting to know what year they are from . Thanks for sharing . Have a good day !

Well, you've got me on that one. Never even heard of Beano...well, for that ;)

I poked around on the Internet, and the best I could do was find Encyclopedia Brittanica's list of name variations for the game. Besides Bingo and Beano, they mentioned lotto, keano, lucky, radio, even fortune (um...something doesn't add up there), and in Britain, house or housy-housy. But no Right.

I also got to thinking that this game might have come from another English-speaking country. Are there any identifying marks on the cards, on the back or side?

Maybe you should hold on to that one for a while 'til you can do some more research on it. Is there any such thing as a Society for the Preservation of Historic Board Games? Maybe this is a question for the Smithsonian :)

As a kid we used to rent rooms in a home where we skied in New York. The lady who owned it was in her 80's and had all of her children's toys in cabinets in one of the rooms. Your pictures remind me so much of the type of thing I'd see when we stayed at her house. How very cool!

I've never heard of "RIGHT" but I have those pegs from that first game. I've kept them many years too and I have no idea where they came from but I don't have the game board just the pegs which if I remember look like little bottles? Anyway, if you don't have enough for your game board......guess who has more? LOL!
How are you doing on Ebay? I did that a while back and it was SO time consuming and I was making nada. I even had some things appraised only to find out it wasn't worth the money to have it appraised! I got bummed out and gave up but I do hate to just take stuff to the thrift when I could use the money. Let me know how it goes. I don't want anyone coming to the house though after those Craig's List murders. Good luck!

I have a scrapbooking program called Memory Mixer and I use that to create headers:)

They have no identifying marks of any kind. I have hunted for years trying to find out more about them.

The old games are interesting... and the "RIGHT" boards too - I hope you find some more info on them (maybe they belong at the museum) :)