Oh it was cold, the wind was raw.  We found a great spot to park, I could lean up against the car for shelter from the wind and take some photos.  Chance enjoyed the whole parade from the backseat. 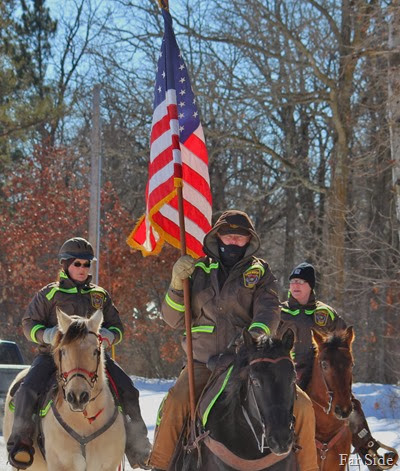 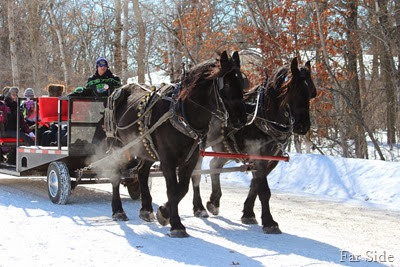 The first sleigh was on wheels and full of people. 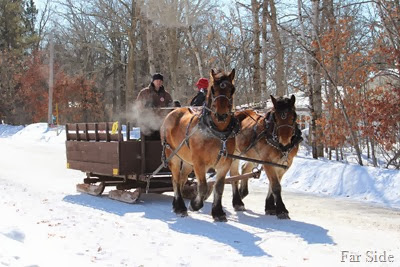 An old box sleigh.  This sleigh would have hauled lots of freight. 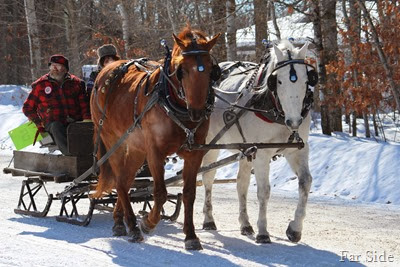 You can see that everyone was bundled up and you can see the horses breath in the photos. This is a small Bob-Runner Sleigh. 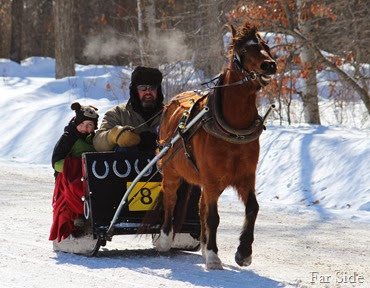 This little horse was not real happy.  His driver kept encouraging him. A custom made sleigh of some sort. 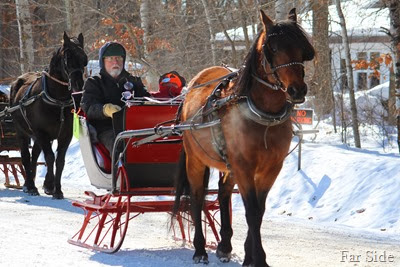 If this gentleman would have had a full beard…he could have been Santa in a one horse open sleigh. This is a Speeding Sleigh or better known as a Cutter. 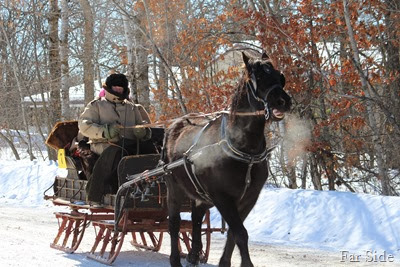 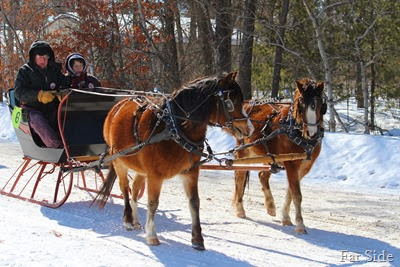 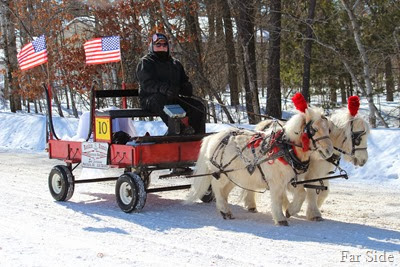 An even smaller team..and best dressed!  They had Rock n Roll music too! 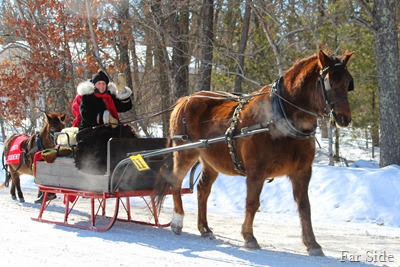 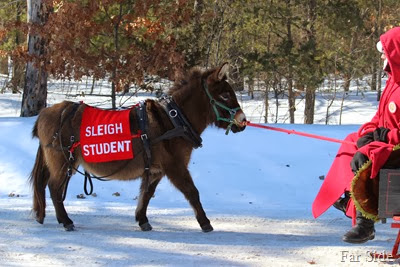 I thought this was pretty cute!

That was it, the entire parade took less than 10 minutes to go by us. These people and animals were all troopers, traveling from all over to be in the sleigh parade in Hubbard Minnesota for the Annual Sleigh Festival.

It was a fun very cold February afternoon.  I am not a sleigh expert, so if I have miss named a sleigh I apologize!

That is such a neat parade. and all the sleigh owners and participants were real troopers, including the horses. Must have been a fun time. Sure looked cold though.

I would not have been real happy out there, either. But it was a very fine parade, with things one would never see otherwise. Thanks for taking me there while I sit in my warm room. :-)

What a wonderful series! I've seen one occasionally, but never a parade. Love to be there.

I've never taken a sleigh ride... love the smaller ones!

Thanks for going and for the photos.

My kind of parade! It looked mighty cold though!

HELLO there, Far Side!
Wonderful parade!.. we're (Minnesota) the only ones that really enjoy the cold! ha ha ha
Or our brains are frozen. oof da, we're getting cabin fever.

I have heard the names of some of them but I wouldn't every had been ever to match them to the real think. It felt cold just watching the photos of them going by you. Great shots though.

Enjoyed seeing all these sleighs and the little sleigh student is so cute. I've always thought it would be fun to go for a sleigh ride.

That sounds like fun, and what a great photo op. I think 10 minutes is pretty well perfect for that kind of weather, just enough to enjoy it, but not enough to get frozen.

Those are some hearty folks out there! We just started our Fur Rondy celebration that is full of indoor and outdoor activities, dog sled races, and what not. It was designed to break up the long winter and help to deal with cabin fever. https://www.newyouin22.com/p/aff/option1

Oh! How cool was that? I loved it and if I lived there I would have been out there too just out of respect for all those that took the time and effort and braved the cold to put on that parade. I remember just recently reading about the different types of sleighs....can't remember where though. Thanks for sharing!

What a beautiful photo op. Thanks for braving the cold.

I would have enjoyed this parade. It's good to stop for a minute and recall how our ancestors traveled.

If you miss-named any, I wouldn't know! Sleighs are not something we ever used much out here in the land of mud. But I do love seeing them.

I guess you can pretty well count on having snow for the sleigh parade:) Interesting seeing the different types of sleigh and horse/pony teams. Glad it was sunny for you, that makes it a little more pleasant when it's bitterly cold like that:)

Well, it might have been cold, but at least it looks like you had sunshine! That makes it a little better, doesn't it?!?!

What great pictures. A real treat to see what the winter festivals are like, far, far away up north!

Great photos! I wouldn't have known any names so your names are fine with me. :-)
Miniature animals - like horses, pigs and cows - are getting to be quite popular with people who have smaller properties. That pair of white horses are quite cute! Thanks for sharing your parade with us. ♥

Oh I have never heard of such a wonderful event! Thank you so much for sharing.

Thank you so very much for visiting Decor To Adore~ Mildred's My Favorite 5 post.

Have a beautiful week!

I want to see this in person, I love horses, I love sleighs. I respect the training needed to get the horses to pull the sleighs and wagons. Thanks for this photo tour.

I hope they had a good turnout, despite the cold. Beautiful horses. I think I might have begged a ride on a cutter!

What a neat way to enjoy winter. We don't have enough snow here for the delightful adventure!

How cool was that! I have never seen a sleigh parade! Thanks, Connie. :)