It seems we had a bit of snow back in 1978 too.  We lived in Moorhead in Regal Estates. 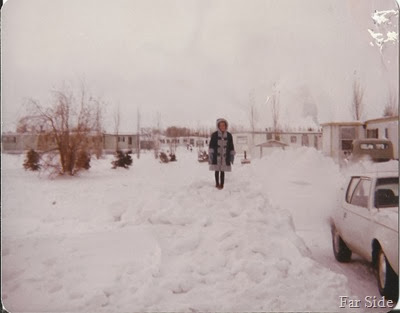 Here is Trica standing on a snow bank at the end of our driveway.  That is our white Gremlin…it was brand new in 1973 we bought it in Florida when we were stationed at MacDill AFB.  Some days Far Guy rode with Denny next door who also worked for the NDANG. Ruth worked at the phone company nights and I took care of Liz and Thad after school.

When we bought our trailer house mobile home it was brand new and we picked this lot in Regal Estates because the lot was on a cul-de-sac and the neighborhood playground  began right there.  It was a safe place to play and I could keep one eye on the girls.  A gal by the name of Kathy lived across the street then they moved to rural Glyndon/ Deb and Ken moved in across the street…they had a whole bunch of little girls.  Susan, Mike, Chadd, Jaynie and Carrie lived next to them then they moved to Glyndon into a new home. 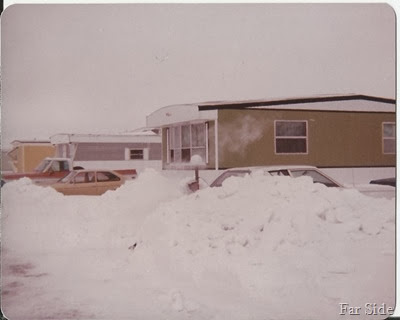 It looks cold doesn’t it?

When we first moved there in 1975 Dave and Laela, Lisa, Julie and Greg lived next door…then they sold their trailer house and bought a house in Moorhead over by the High School. Then a couple who argued all the time moved in next door in that new green trailer house.  It was embarrassing when you were sitting out in the yard when they had one of their frequent arguments with all their windows open.   The middle trailer house was the home of Jim, Lynne, Tami, Shannon and Tori.  I took care of the kids.  Further on down the way Phil, Lynnette, Jessica and Missy had their home and I also took care of Jess and Missy.

The trailer court was a stepping off point to home ownership for most of us. We lived there from May of 1975 to the summer of 1980 when we moved to a house in north Moorhead.   Mike and Susan still live in Glyndon but will move to the lake this summer, Jim and Lynne still live in Moorhead and Phil and Lynnette moved to Indiana and Deb and Ken moved to Cheyenne Wyoming. I think Denny and Ruth got a divorce…and I am certain that the couple that argued constantly probably got one too.

All those little kids that I took care of so long ago are married and have children..some of which are in college…makes a person feel kinda old.

Fond memories of days gone by!

Thanks for the old photos and memories. Yes, it does look cold in your pics. Brrr!

It looks cold and snowy all right, but nothing like you've got today, is it? Or maybe it's just that I'm thinking it's more than usual this year. :-)

Looks like 'global warming' then too, doesn't it. And when I was a little girl, the snowbanks were every bit as huge as they are now. But that's because I'm ancient and remember those things. Enjoyed the photos. Brought back memories of Moorhead, Fargo, and Jamestown in years past.

Ahhh, sweet picture, but so much snow, like this year, Francine.

Thanks for sharing your memories. Brings back memories of my own girls growing up in the 70's and 80's.

A wonderful post - so good to record these memories.

The winter of 78 was a bad one in Wyoming, too. I was living in a trailer house at the time and worried about the roof, the water pipes, the heat tape, the furnace, etc.

Precious memories! Great photos from the past!

How wonderful to have had all those friendships and all of those kids around. It sounds like you have kept track of many of them.

I think nothing is safe from Google any more. On my 2nd try, I found this: https://maps.google.com/maps?expflags=enable_star_based_justifications:true&ie=UTF8&cid=8747431764527247729&q=Regal+Estates&iwloc=A&gl=US&hl=en From the air, it still looks like a pretty nice place. I think yours would be the double wide next to the little park. Have you been back there lately to look at it?

My forst purchase was a trailer too. Dimond Estates! Estates my a**!

It feels like the 70's were just a little while ago...I seem to be stuck in that era maybe because that's when I was having my kids? How could that be so long ago? I remember my older cousin when I was a kid got married and they had a "mobile home" and I thought that was the most romantic place to live as a newly wed. I have no idea why I thought that but I did and I wanted one someday. I think I thought you could really just pick up and go whenever you wanted....like every day. LOL!
Also, can anyone tell me who that old woman is in the mirror every day that I see?

No we have not been back to look, our place is the empty lot just north of the double wide...a dark colored vehicle is parked in the driveway. I think I planted one of those trees! Interesting! :)

Wonderful old photos ! I remember the tons of snow we got in the winters on our farm here in Ontario way back in the 60s, 70s & 80s it was soo much we even had it snow one day in the beginning of June back in the 70s to . This year was the most snow we have had since then . Thanks for sharing . Have a good day !

You influenced a lot of little people. You rubbed shoulders with many people along the way. It's nice to look back.

Well, shoot, missed it by one! Still, not to bad from way out here in CA. That was the 45 degree view, kind of like off to the side. The regular view is a different one, no car, and not as clear.

Totally agree with Red. That's a lot of young people--it's a legacy of its own, in a way :)

I remember those winters!

I wouldn't be surprised if the arguing couple are still together, too. I grew up in a house like that. Over the years it big fights toned down, but the bickering remained. Some people love to feel put upon. There's somebody for everyone, I guess--LOL! ;)

I had friends at Sidney, Iowa who moved the trailer up to the Des Moines area back in the early seventies. That is 3 to 4 hours of towing. They stayed in it for another few years and at the time they sold it they got a price higher than what they had paid for it.