In the summer of 1978 a Foreign Exchange Student from Costa Rica came to live with my parents.  My other baby brother Jody and my sister Julie were still at home.  Jody was a Senior that year.  My baby brother Carey was a newlywed and lived in Oklahoma or maybe Colorado by then. 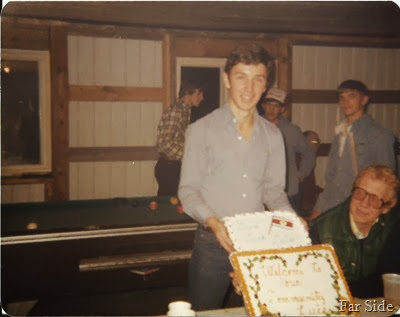 My parents had a welcoming party for him down in the Recreation room at the resort on Straight Lake.  In this photo I see a friend  of my brother in the background..Tom L. I think and a couple of my cousins.  That is long time area resident and friend Grant looking at the cake.

Luis spoke mostly Spanish and his English was limited, but he got better as the year wore on.  He had never seen snow before…rest assure he got to see lots of it while he was here.  It was interesting and he was a great kid. Our daughters Trica and Jennifer adored him. 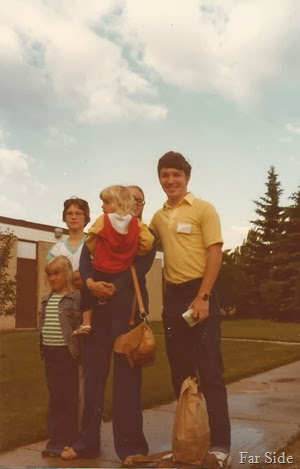 Julie, Me, Luis, I am holding Jennifer and Trica is in front of Julie.

This is the day he left Minnesota, we were waiting to send him off on a bus to tour some of the United States before heading home.  He sent me this photo on the back it says “Do you remember this day? My last day in Minnesota.”

Trica and Jennifer were quite upset, they didn’t know why he had to leave. Hard to explain to young children that someone they have grown to love over a year has to head back to his own home.

The kids in his graduating class took up a collection and bought him a plane ticket back for their 10th reunion in 1989.  He borrowed Far Guys car to go to town.  People at the gas station wouldn’t believe him when he said he didn’t know how to put gas in the car.

We have not heard from him in years.  Have you ever hosted a foreign exchange student?

No we haven't , not much of that goes on here really when they come here they usually come to our country and stay for a long time in residents of a collage or UNI . Wonderful photos and story I was wondering if you both keep in touch . Hope you both get a chance to talk or see him again soon that would be cool . Thanks for sharing have a good day !

I have never hosted a foreign exchange student. I have had the pleasure of hosting foreign exchange adults. They were teachers from Europe who wanted to better their English and knowledge of the US. They would stay with different host families for 1-2 weeks at a time all summer long. We loved doing it.

I forgot to say that I am still in contact with one of them after almost 40 years.

That was a long time ago. I hope he's doing well, wherever he is.

What a wonderful experience that was for all of you!

We had exchange students in our school, but only the "rich" families hosted them.
It would be lovely to make contact with him again, but that would most likely be very difficult, even in our hooked up world today.

I think the year was 1961, we hosted for a weekend only an AFS student. Her name was Marihaha Fajard (unsure of the spelling). She was from Iran and her father was an officer in the air force. I have often wondered what happened to her during and after the Iranian revolution. In my graduating class, 1964, we had Max Bragado from Spain. He became a symphony conductor. Thanks for shaking my brain!!!

How interesting. No, I don't even know anyone who has hosted a student. He sure is a tall guy. It would be awesome to have an update from him.

How sweet of his fellow grads to fund his trip back for the reunion.

I taught many foreign exchange students in my classes over the years - each unique ans special.

No, we have never done that, although I knew of those who did. I love the fact that a collection was made to bring Luis back for the reunion! Maybe you could find him on Facebook:)

I remember Luis - I would have been 11 years old :) Mom and Dad have had several exchange students - all very interesting and great experiences. The first one was Mina from Japan in 1981 - Memories :)

We actually had one here for just a week, for the spanish club that the daughter was in. She was a lovely girl, but she was pretty home sick and didn't have all the much fun. We did try though.

We have not but two of our neighbors hosted a couple German students and since my hubby is from Germany we cooked several german meals and had them all over! It was a blast!

From the people I know who've had exchange students, the family learns as much or more as the foreign student.

What a sweet story. I don't know of anyone who has hosted an exchange student. He looks like such a nice boy.

How touching that the graduating class raised the funds to bring Luis back for the reunion! Your poor girls, not understanding why he had to leave when he returned home :( Bet they were overjoyed to have him come back to visit, ten years later!

My parents hosted an AFS student for a year from Brazil, and it was a wonderful experience for us all. They do become a member of the family, that's for sure. Cris has been back once also, and we are in regular contact on the wonderful Internet. Have you tried finding Luis on Facebook?

My neighbors hosted a lot of them and we got to adopt them once in a while. The one from Germany was sort of a handful but he was a very nice man. He is now a great photographer and publishes books. The one from China was sort of close but he did have me help him defect from some country. I photocopied his paperwork for him.

No, but I had a pen pal for several years from Italy. From when I was about 10 till I was around 13 or 14. I got too weird! Filling pages with Xs and Os and telling me he loved me and was going to come to America. I told him I wasn't interested in him as a boyfriend and quit writing to him. Senior year--out of the blue I get a phone call and he had shown up in Minneapolis as a foreign exchange student at DeLasalle High School! Still freaked me out. Trying to grab my leg and leering. I think he thought 60s-free love in the US, you know--but not at my house! My folks loved him and had him over quite a few times. I avoided him like the plague--LOL!

We did have a foreign exchange student at school one year and she was so sweet! I cannot remember where she was from now? Somewhere in South America, I think. It's a great program. :)