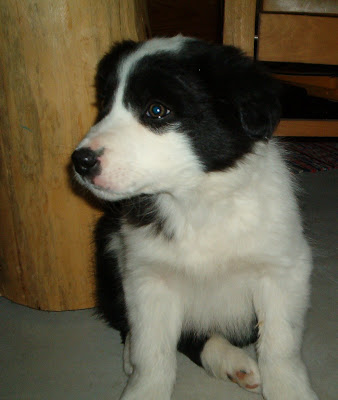 Loving to sleep among a "litter" of boots and shoes! 2005

Chance is four years old today! We were dog people without a dog four years ago, we were pathetic..we had been dog-less for three years. Far Guy kept talking about a Border Collie, I was a Sheltie person, but I had a Collie when I was growing up. All our previous dogs were very attached to me, we had a good bond because I was home more than anyone else. Now Far Guy had some time..so we decided on a Border Collie, perhaps he could form a really good bond with a new pup. We researched the breed and decided a pup with some energy would work for us. Far Guy loved the way they herded sheep, but he had no intention of buying any sheep. We just wanted a dog as a pet. The day before Christmas 2004 I noticed an ad in a local paper, the day after Christmas we just went to LOOK at this litter. The Border Collie Mom was friendly and outgoing, the farm wife and kids were nice, and the puppies ..oh my..they were born in a big old barn and had the run of the place..along with many children of all ages. There were six or seven pups, some curious, some hiding, some chasing their brothers and sister. I say sister because there was only one little girl and she had been spoken for. We weren't set on a girl anyway, a boy would be just fine. I am looking around trying to decide who I liked the most, I wanted to cuddle with the one that was hiding, I wanted to play with the ones that were playing. In the meantime Far Guy had been chosen, one of the pups walked right up to him and wagged his tail...Far Guy was a goner! I kept looking at all the other choices.. "Oh honey, look at this one, look at that one." He said "Yes dear" all the while holding this one little pup. " OK, OK, your new dog just picked you! " We left with our "Chance" at being dog owners once more:) 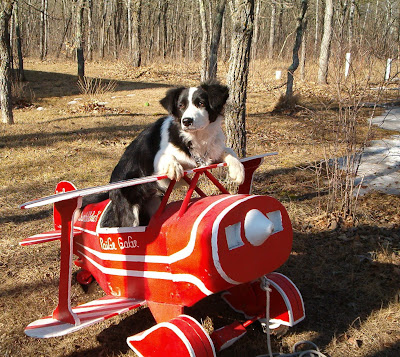 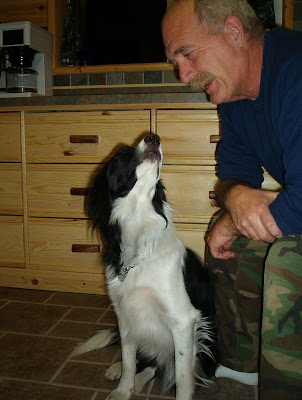 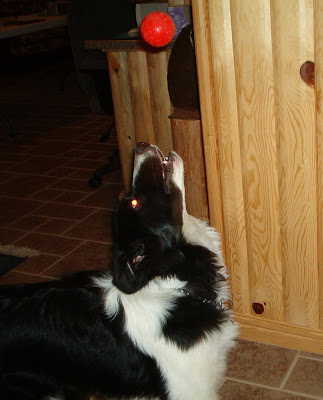 Chance always has his eye on the ball! Playing Ball is his JOB!! Border Collies Need jobs! 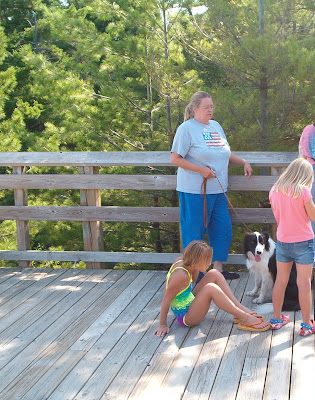 Chance on vacation! He goes everywhere with us!! That would be me holding the leash, and two of our grand-daughters..guess who Chance has an eye on? Yup.. Far Guy had the camera! And the crazy dog is the only one looking at the camera! Northern Minnesota 2006 One of my very favorite photographs.. our daughter Jen took this of Chance and Savannah our oldest grand-daughter in Minnesota in 2006. Chance also loves to catch water in his mouth, he doesn't swallow it..he just leaps in the air to catch it! 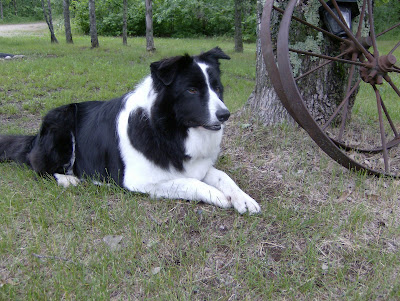 Happy Birthday Chance!
Posted by Far Side of Fifty at 8:01 AM

Happy Birthday Chance!! Sending hugs and kisses to you. I just love him! He is so cool! What great pictures of him, especially of him jumping in the water. A good friend of ours has one and she is the smartest, most loyal dog I have ever met, well except for my Ruby. Hope you have a great day celebrating your "furry" child's birthday!
BTW, I wanted to really, badly nominate you for a bloggie award but noticed from a previous nomination that you would rather prefer not participate. You would have been one of my top picks to be nominated. I love reading your blog daily!

Happy Birthday to you Chance.
You are a gorgeous dog, and obviously well loved and cared for.

I can hardly wait, until we get our farm, dogs, cats, all sorts of animals.....

My husband is a pilot without a plane, so I showed him that your dog had a plane, he was so jealous.

Happy Birthday Chance! I hope your day is full of belly rubs, walks, and meat!

He's sooo cute. Chance I mean, although Mr. farguy is too. I keep thinking about getting a dog, not a border collie because I don't have the space or energy for one of those. Everytime I read a blog about a dog the itch gets stronger. Probably won't be long now. Happy Birthday Chance.

Happy B-Day Chance! He looks like a wonderful dog. My kind of dog!

Happy Birthday Chance1 You are one GOOD LOOKING DOG!

oh my gosh what an adorable puppy he was! and he looks like a happy healthy dog. love the jumping picture.

our border collie, boscoe, is not the least bit interested in water. i think he was five years old before he'd even drink out of a stream; he doens't like getting his toes wet.

Loved the photos of Chance! What a cute puppy - and a great dog! I just love that piccie of him flying up trying to catch water in his mouth.