They were out of Milky Way Dark minis...so I had to sub the regular Milky Way minis.   I also had a substitution on my wax paper.  I use lots of wax paper when I am painting ornaments....and baking cookies...but there are no cookies being cooled lately...just painting.   I ordered Cara Cara Oranges to see if they had them...they substituted a South Africa Orange called Midknight...I have not tried it yet.  I marked my Cara Caras  "no substitutions" and you can bet if it is not up to my rigorous orange standards...I will complain.

We have been slowly stocking up on bath soap, laundry soap, toothpaste, shampoo and lotion. AND we have a good supply of toilet paper!  Next on my list is to check our supply of flour, yeast and sugar....and Pumpkin...because the Grands are already asking for Pumpkin Bread.

I took my Dad to Bingo, I  got a bingo...so it was a free night out for both of us!  Dad said he had fun.  He was a bit unsteady...and almost fell once...I was able to grab him and keep him  upright.   Scary for sure.

Far Guy took off on Ranger Blue when I left for Bingo....the other day there was "this trail"  it was narrow and rocky and I decided it was not a great trail and backed out before I got too far....it was sketchy...well guess who HAD to try it?   Far Guy reports it is just as narrow and rocky as we thought...but it also has many steep hills up and down ...he said there are huge gullies and I wouldn't have liked the trail at all.  So he had an adventure without me.

I did not get 6 Christmas Ornaments done yesterday...perhaps I can make up for it today.  The car has an oil change appointment and our electrician is stopping by to install a smart thermostat and to do some other work....so it will be another busy day. 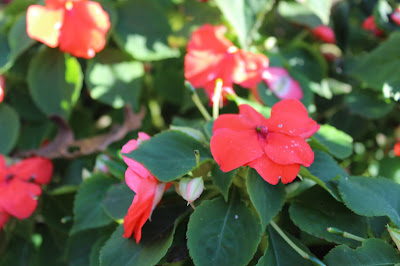 It froze hard enough that the Impatiens looked sick in the morning and by late afternoon they were brown and shrunken...the blooms are now only a memory.